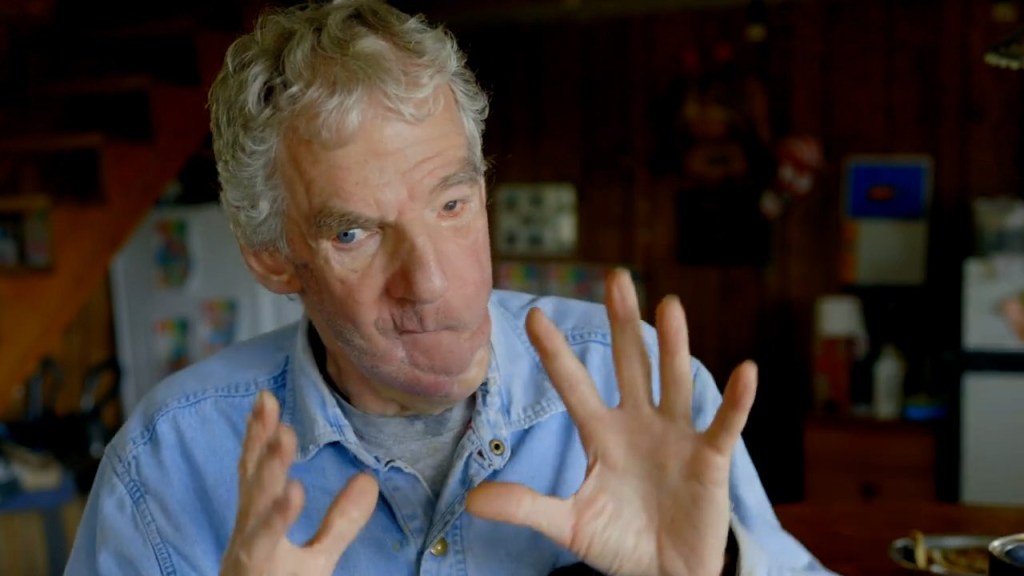 Wes Perkins, 65, had his entire jaw ripped off by an eight-foot grizzly bear in Alaska in 2011 (Picture: Dannie Rose)

A man who had half his face torn off by a bear has spoken out about how he survived and recovered from the terrifying ordeal.

Wes Perkins, 65, was attacked by an eight-foot grizzly bear on May 16, 2011, while on a hunting trip with friends in the Alaskan mountains.

The former fire chief lost his tongue, jaw and almost all his teeth and had to clear mud and debris from his airways so he could breathe.

Wes, from the Alaskan city of Nome, became addicted to painkillers after taking morphine and opioids while recovering, and could not eat or drink using his mouth.

He explained how his group was pursuing a ‘nice-sized’ bear in the snow and following its tracks until ‘the bear disappeared’.

Dan Stang saw the bear was on top of his friend Wes and shot at the animal (Picture: Dannie Rose)

Wes and his wife Terrie before the bear attack (Picture: Facebook)

Wes stopped ‘not realising the bear was only 70 feet away in a hole’ before the animal came running towards him in ‘full charge’.

He managed to get his gun partially off his back but the bear was too close too quickly and he ‘had no time to do anything’.

The dad went on: ‘I never lost consciousness. I had to open my airways because I had a bunch of mud here – my face was all tore up – lost my teeth, my tongue, my jaw. And so I just stayed focused.’

By the time Wes’s friend Dan Stang looked back at him, the bear was already on top of him.

Dan started shooting the animal but the bear spun around and started charging at him. This is when Dan’s son Ed began shooting at the bear as well, and eventually killed it.

‘I probably saved Wes’s life and my son saved my life from the whole ordeal,’ Dan said.

When he went to help Wes, ‘his whole face rolled right off’.

Wes, pictured here with his daughter Pat, said he still does ‘almost everything’ he used to (Picture: Facebook)

Wes had to go through multiple operations before he could speak again (Picture: Facebook)

He used his radio to call for help but the group had to wait an hour before anyone got to them.

Wes used the snow to keep ‘what was left of his face’ numb but started feeling hypothermic.

He was eventually helped into the helicopter and then rushed to hospital where he had to have titanium plates inserted in both cheeks and a titanium rib put in around his jawbone.

He also had a fibula bone graft, where surgeons took bone from his lower left leg and made a jaw with it.

‘It helps me cope with grief’: Knitters on why they’ll never put down the needle

Tricia Dearnley attaches the final squares to a group effort knit (Picture: Dominic Lipinski/PA Wire) When Tricia Dearnley, 55, went through the very thing no parent is prepared for – losing her son – she turned to knitting to help with the grief. She knits handmade toys – such as dogs, cats, and teddy bears, […]

Owen Farrell ‘learns a lesson’ from suspension for dangerous challenge

Steve Borthwick and Owen Farrell with the Six Nations trophy (Picture: John Walton/PA Wire) Owen Farrell insists he has learned his lesson after a difficult Six Nations build-up disrupted by the spotlight on his tackling technique. Farrell will be available for the February 4 opener against Scotland after a three-match ban for a dangerous challenge […]