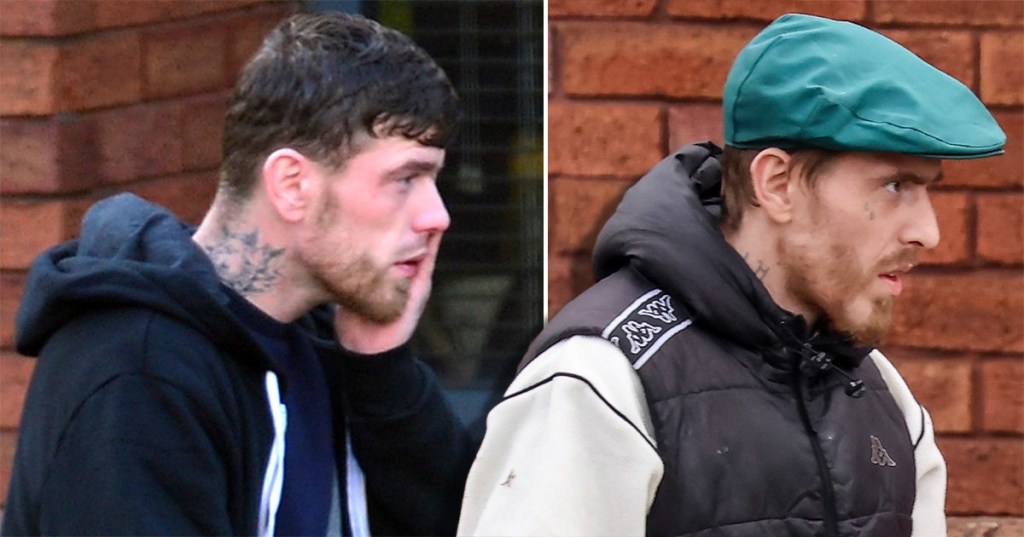 A man tried to pin a burglary on his identical twin brother after being
caught sneaking into a home by a Ring doorbell.

Adam Reynolds, 34, was captured on camera entering a house via an unlocked porch in Stoke-on-Trent, in the middle of the night.

When police caught up with Reynolds and confronted him with the evidence he told officers it was not him but his identical twin brother Corrie.

But the plan failed and Reynolds, who has 62 convictions for 148 offences including two previous burglaries, went on to plead guilty to burglary.

Stoke-on-Trent Crown Court heard Reynolds, of no fixed address, crept
inside the porch at 4.30am on October 10 after being released on licence.

Antonie Muller, prosecuting said: ‘Overnight on October 7 to 8 somebody
had gone in and moved items.

‘The owner noticed and purchased a Ring doorbell which alerts her to movement.

‘On the morning of October 10 she saw a number of these alerts.

‘Looking at the footage it showed that at 4.30am the defendant entering
the porch and trying to remove the Ring doorbell from its housing.’

Mr Muller said after noticing her children’s hobby horses had been moved to lean against the window she alerted the police.

The court heard the officer recognised Reynolds, who was arrested.

Mr Muller added: ‘He denied it. He claimed the footage was his identical
brother and he had done nothing wrong.’

Mitigating, Richard McConaghy said: ‘Access was gained by the porch
and no attempt was made to force the door. Identification was made
with the doorbell.

‘The items taken were not of any significant value. When asked to explain his behaviour he said it was for financial gain.

The case was heard at Stoke-On-Trent court (Picture: PA)

‘He was in the grips of a drug addiction at the time. He was plainly suffering from
his mental health.

‘He has spent 249 days remanded in custody.

‘This is a man who does require support He wants to make clear that he’s apologetic for what he has done.’

Reynolds was sentenced to 14 months behind bars.

Sending him to jail, Recorder Matthew Boyle said: ‘You have an appalling record. Your Class A drug use had led you to develop psychotic episodes.

‘You were behaving abnormally.

‘The porch was unlocked but you didn’t get any further and the items you took were of minimal value. The offence is aggravated by your previous convictions.’

Noel Gallagher’s scissors player makes it all the way to Glastonbury, to the bafflement of fans

Noel Gallgher’s High Flying Birds set at Glastonbury included the return of his scissors player (Picture: BBC/Getty) Noel Gallagher’s set at Glastonbury 2022 on Saturday provided all of the usual class music and sweary chat that his fans have come to expect – as well as something a little more unusual. Taking to the festival’s […]

Arsenal have £51m bid for Victor Osimhen rejected by Napoli

Arsenal have been told to pay £85m for Victor Osimhen (Reuters) Arsenal have seen their €60 million (£51m) offer for Victor Osimhen rejected by Napoli, according to reports in Italy. The Gunners are looking to sign two new strikers before the end of the summer transfer window with both Pierre-Emerick Aubameyang and Alexandre Lacazette leaving […]

Did you find the strikes nightmarish? For disabled people travel is always like this

The rail network simply doesn’t seem to learn from its mistakes (Picture: Bryn Colton/Getty Images) As I realised that I would have to go down two lifts and wheel myself along an underground tunnel to the next platform – without the assistance I’d been promised – I felt a wave of dread wash over me.    It […]