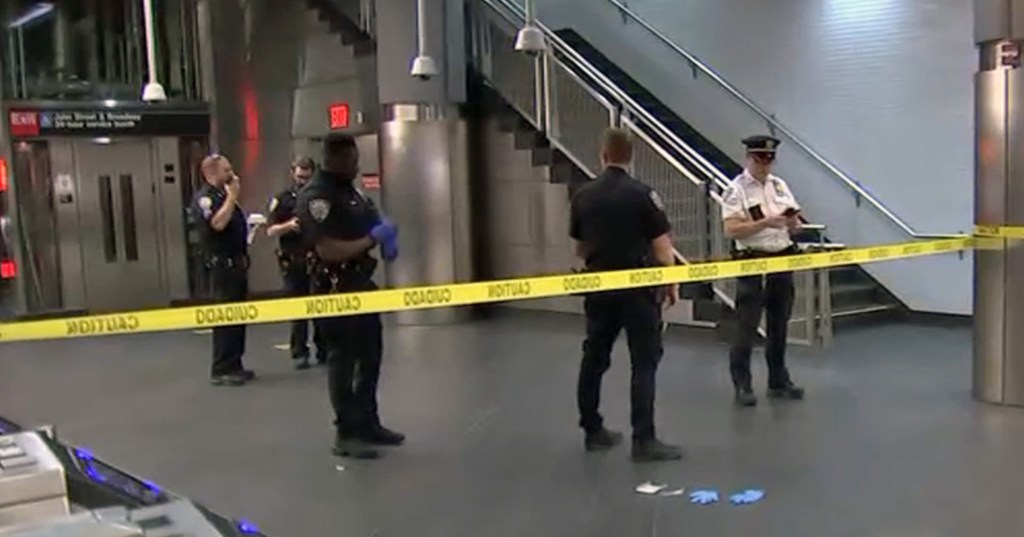 A New York City subway rider allegedly slashed his girlfriend inside a station during the morning rush hour.

The woman was arguing with her boyfriend on the mezzanine level of the 4 and 5 trains stop at Fulton Street station shortly before 9.30am on Tuesday, police said.

Splashes of blood could be seen on the floor of the lower level of Fulton Street station, sectioned off with police caution tape.

Other photos from the scene showed the woman with a blood-soaked bandage around her head and faced, and with her shirt stained with blood, as she sat on a stretcher and was lifted into an ambulance.

The woman, who is 49 years old, was transported to Bellevue Hospital and was listed in stable condition as of Tuesday afternoon.

Her identity and that of her boyfriend described in his 50s were not immediately released.

Jamie Carragher and new Liverpool signing Darwin Nunez (Pictures: Sky Sports/Getty) Jamie Carragher has predicted Liverpool’s front three for next season after Darwin Nunez joined the Anfield club. Liverpool confirmed they had signed Nunez from Benfica on Tuesday in a deal worth an initial £64m. The 22-year-old, who scored 34 goals in 41 appearances last […]

How to stop your puppy from pulling on the lead

Oh dear (Picture: Getty Images) Puppies are, by their very nature, excitable and that can make taking them for walks pretty chaotic. Unfortunately, according to a survey of 2,000 UK adults conducted by puppy training coaching app Zigzag, an unsettling 42% of UK dog owners identified ‘pulling on the lead’ as a behavioural issue in puppies, […]

To view this video please enable JavaScript, and consider upgrading to a web browser that supports HTML5 video A Paddy Power advert has been banned by the Advertising Standards Authority for featuring gambling ‘taking priority over family.’ The advert, released in March, sees a man responding inappropriately to his partner asking if he thought she […]