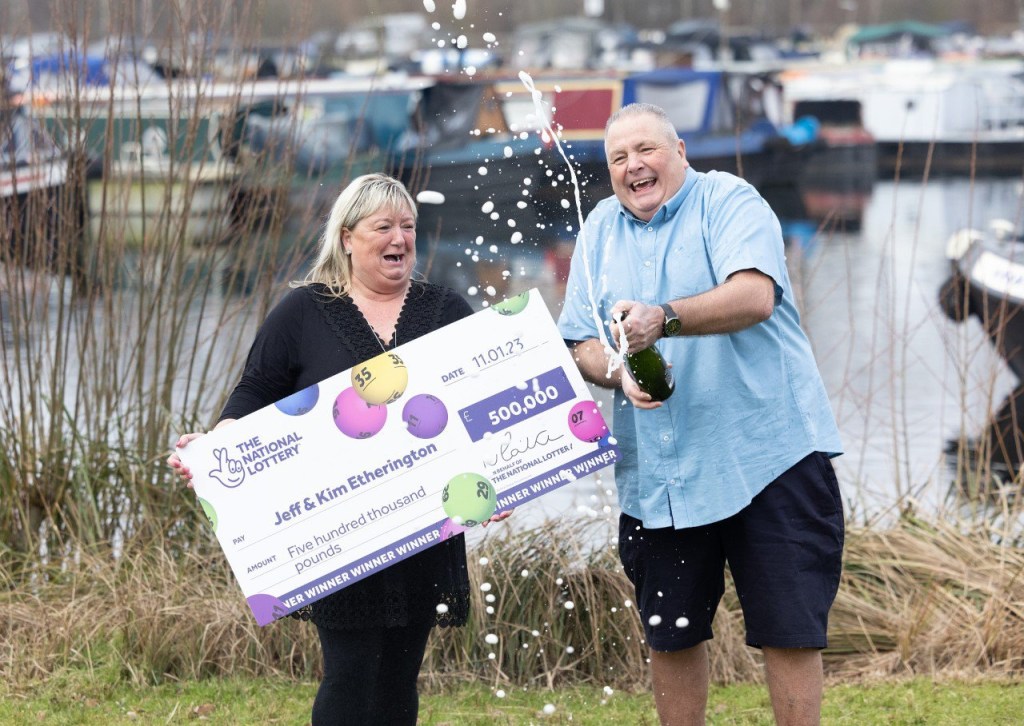 It is the ultimate shift swap.

Jeff Etherington, 65, believes he was simply ‘in the right place at the right time’ after scooping £500,000 on the lottery.

Jeff credits changing to an early shift at work for his life-changing big win.

The machine setter from Harlow swapped to an early shift on January 11 so he could attend a hospital appointment.

Although the discussion over a knee replacement didn’t go well, Jeff consoled himself by buying a lucky dip on the Thunderball.

And it was this lucky ticket that secured him the half a million windfall.

Jeff said: ‘I’ve always believed that one day I would win big. It’s taken 28 years but here we are, I’m heading into retirement with £500,000 extra to my name.

‘I can’t help thinking it’s fate, had I not swapped shifts for that hospital appointment, I wouldn’t have been buying my Lucky Dip ticket at that exact moment and some other lucky person might now be celebrating instead!’

The win means Jeff and his fiancée Kim, 60, can finally get married.

‘We’ve been together for six years, and finally got engaged in 2021. We always knew we would get married eventually but the money was always spent on something else. Now that ‘eventually’ wedding can happen imminently!

Jeff vividly remembers finding out that he’d won, adding: ‘I was pretty absent minded about it but as I saw the winning Thunderball numbers online they all seemed familiar and as I ticked each one off I realised we’d won.

The couple are planning to celebrate their win with a break in a luxurious lodge (Picture: Camelot UK Lotteries Limited)

‘I turned to Kim and said ‘We’ve won £500,000′ she responded by telling me to go away, but in quite colourful language!’

‘I was convinced it must be a joke but the logical part of my brain kept telling me it was a real ticket so must be a real win, using the same logic I decided to check The National Lottery app.

‘Scanning my ticket the app told me the results were not yet available, I must have scanned it about 100 times until suddenly it pinged and £500,000 popped up in the window.’

Jeff was cheered when he arrived at work the day. He and his wife have booked a four night break at a luxury lodge to celebrate their win.

The National Lottery raises £30,000,000 every week to support good causes.

MORE : Woman gets revenge winning lottery after husband went off with best friend

Olive Westerman has some wise words to share on her special birthday (Picture: Deeswater Grange Care Home/SWNS) A 100-year-old woman has revealed the secret to a long life is ‘not speaking to strange men’. Olive Westerman celebrated the landmark milestone with an afternoon tea at the Deewater Grange care home in Chester. The centenarian had lived […]