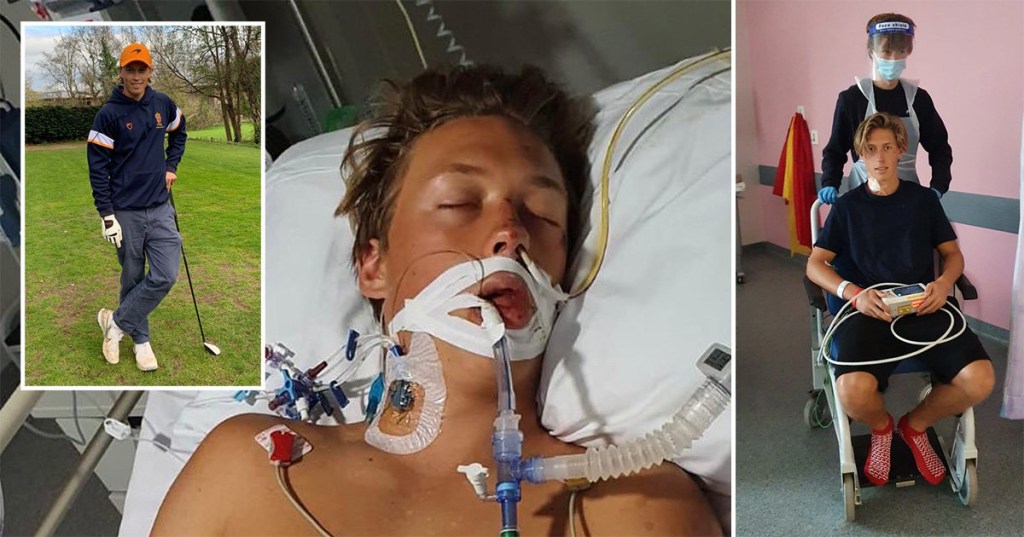 Guy Gowar suddenly collapsed at the age of 18 while he was playing golf (Picture: British Heart Foundation)

A teenager has revealed how he almost died at the age of 18 due to a heart condition – if it hadn’t been for a golf player who saved his life.

Almost a year on from the day which could have changed everything, Guy Gowar told Metro.co.uk about how it was a ‘normal day’ at Meole Brace golf course in Shrewsbury, Shropshire, on April 5 last year.

‘It was about 5.30 in the evening and we got round most of the way, we were on the ninth hole – the course is only 12 holes.

‘I was teeing off and had been feeling fine all day, and hadn’t thought anything was wrong with me.

‘My last memory was the tee shot – it was quite a decent shot. I remember the sound and contact and remember looking at the ball, watching the ball and then I collapsed.

‘Weirdly, I didn’t remember anything when I was in hospital but when my mate spoke to me about the day I said, “Oh yeah, I remember, I remember.”‘

Immediately Aaron, a physiotherapist who was playing on the sixth hole nearby, rushed over to see what had happened.

Guy pictured just before his sudden cardiac arrest, which happened while he was playing golf (Picture: British Heart Foundation)

Guy at Meole Brace golf course in Shrewsbury, Shropshire, a year after his cardiac arrest and photographed in the exact spot where it happened (Picture: British Heart Foundation)

Guy’s friend and four other nearby players said they didn’t know what had happened – but Aaron quickly recognised the teenager was slipping into cardiac arrest, and started CPR.

‘My mate got someone walking by to call an ambulance, and there was a defibrillator at the clubhouse which someone ran to get,’ Guy added, filling in the gaps in his memory.

‘There was also a nurse who was walking on the road nearby, just out for a stroll, she came over to help the physiotherapist. A helicopter also came.’

Incredibly, after just one shock with the defibrillator, Guy’s heart restarted.

He was rushed to Royal Stoke Hospital, in Staffordshire, by ambulance after paramedics in the helicopter decided he was stable enough to travel.

‘I was still unconscious and was taken to hospital were I was put in an induced coma for three days,’ said Guy.

‘They didn’t know at the time if I had any brain damage, so they put me in the induced coma for that time.’

He was put into an induced coma for three days, and it was unknown whether he would have brain damage when he woke up (Picture: British Heart Foundation)

Guy pictured in hospital with his cousin Peter during his recovery (Picture: British Heart Foundation)

His family quickly rushed to his side – including his mum, who had to get a flight …read more

Gino D’Acampo has left viewers in hysterics time and time again over the last 12 years, from renaming toad in the hole as ‘sausage in the hole’, to calling a pregnant Holly Willoughby ‘up the fluff’, but one iconic moment reigns supreme. Some fans may remember a scene, which has now become a viral meme, […]

To view this video please enable JavaScript, and consider upgrading to a web browser that supports HTML5 video Piers Morgan was forced to cut an interview short after he was branded a ‘c**t’ by a guest on his own show. The former Good Morning Britain host was presenting on his TalkTV show, Piers Morgan: Uncensored, […]