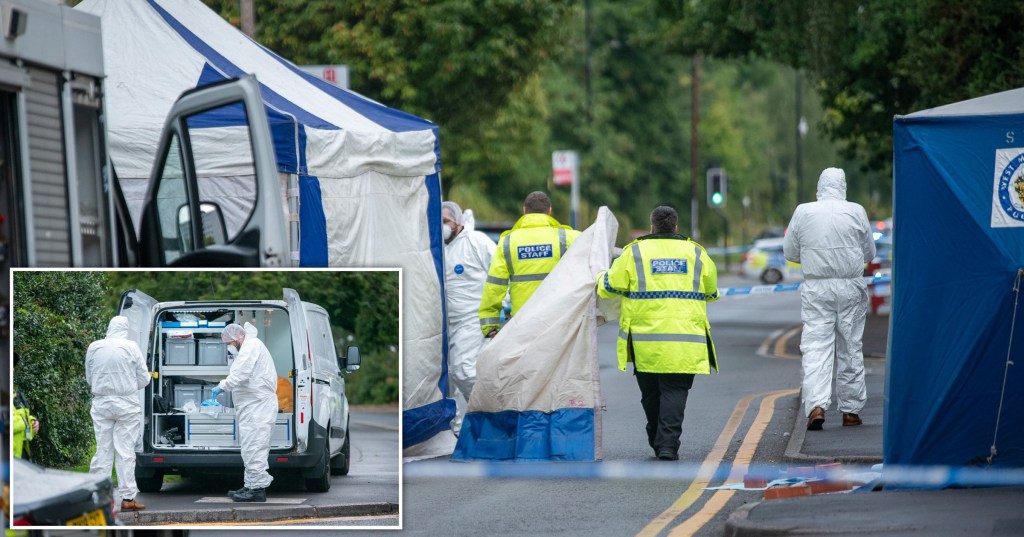 Roads were shut and pavements cordoned off as police locked down the area (Picture: Ryan Underwood)

A murder investigation has been launched after a man was found with stab wounds in a crashed car.

The vehicle was spotted driving ‘erratically’ before impact, detectives say.

Officers had initially been called to reports of a car crash in Metchley Lane, Birmingham, at 3pm yesterday.

Paramedics had rushed to the scene to treat the man, but he was later pronounced dead in hospital.

Roads were shut and pavements cordoned off as police locked down the area yesterday.

Officers have now appealed for the public for information that could aid their investigation.

They are looking to trace a man who was seen running away from the crashed car.

A spokesperson from West Midlands Police said: ‘Officers attended and found the man being treated by paramedics but sadly despite their efforts he was later pronounced dead at hospital.

The man was found stabbed to death after police responded to a crash (Picture: Ryan Underwood)

Roads were cordoned off following the find (Picture: Joseph Walshe/SWNS)

Detectives are on the look out for information on anyone who saw a silver car being driven ‘erratically’ (Picture: Joseph Walshe/SWNS)

‘Roads in the area are cordoned off as enquiries get underway to establish exactly what happened.

‘We’re keen to hear from anyone who may have seen the car, which was silver, driving erratically from the direction of Harborne Lane prior to the crash.

‘We’re also keen to trace a man seen running from the car, as he may have vital information to hep the investigation.’

Anyone with information has been asked to get in touch, quoting log 2423 of 22 September.

The music world is mourning the loss of Grammy winner Coolio (Picture: Getty) The music world is in mourning after the death of legendary rapper Coolio at the age of 59 from a suspected cardiac arrest. The star, best known for his worldwide hit Gangsta’s Paradise, was working right up until his death and was […]

James Edginton, 39, pleaded guilty to fraud, attempted fraud and theft (Picture: ITV) A former Britain’s Got Talent semi-finalist has been found to have stolen almost £20,000 in cash to fund his gay rights charity. James Edginton, 39, who appeared on the show in 2010 and reduced judge Amanda Holden to tears with his version […]