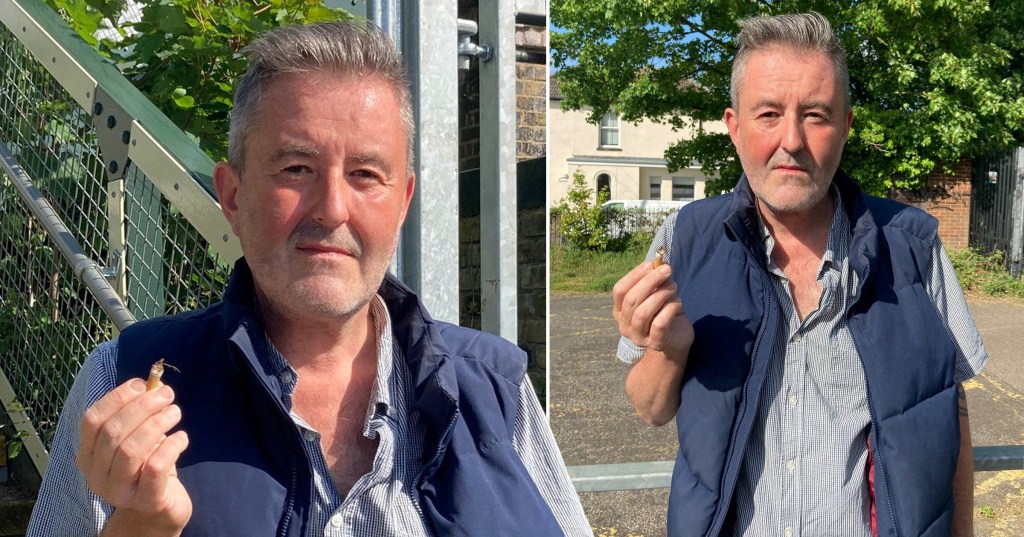 Giles Kelch said it was not his fault as there was not a sign warning not to drop litter (Picture: SWNS)

A man fined for dropping a cigarette butt says it was not his fault as there was no sign warning against it – and claims smokers are victims of an ‘easy money-making’ scheme.

IT worker Giles Kelch, 51, was spotted dropping his stub on the ground in Faversham, Kent, on March 29.

He was seen by an enforcement officer working on behalf of the local council, who gave him a £150 fixed penalty notice.

‘One cigarette butt is not going to ruin the whole of Swale, and I think it is absolutely disgusting. I think they’re trying to make money for the council.’

He said this should not be a major issue when costs and energy prices are rising, saying that the council should focus on the extensive fly-tipping in the area.

He said the council should focus on fly-tipping and waste collection (Picture: KMG/SWNS)

Mr Kelch also feels there are not enough signs warning people of the punishments for littering.

‘There are no signs stating if you do it, you’ll be fined, and I think that is unethical in the extreme,’ he said.

‘I don’t see how you can charge people who are unaware it will be enforced, if you don’t put any signs up? If you go to a car park and you don’t pay, you know you will be charged [because of the signs].’

He said the cigarette end was put in the bin once it was pointed out.

Mr Kelch, who looks after his bed-bound father, has been given an extra month to pay the fine.

He said: ‘Their take was if you’re walking around and there are no bins, you wait until you get home and stick it in the bin.

‘There are only bins in the town centre, but once you come out of it, there is nothing.’

An undisclosed percentage goes to Kingdom LA Support, the company the council has contracted to carry out the enforcement.

Only five fixed penalty notices were issued for dog fouling in the same year and none in the two years before.

A spokesperson for the authority said it spends more than £1 million each year cleaning the borough’s streets – with smokers accounting for three-quarters of all litter.

They said: ‘Not only do cigarette butts look unsightly but they contain single use plastics and toxic chemicals that can persist in the environment for many years.

‘Littering of any kind can receive a fixed penalty notice of £150, …read more

The actor doesn’t seem fazed by the leak but highlighted the importance of consent (Picture: Axelle/Bauer-Griffin/FilmMagic) Jesse Williams has spoken out on the leak of his nude scene in his Broadway show, saying he’s ‘not down about it’ after videos and photos went viral on social media. However, the Grey’s Anatomy actor has stressed the […]

Beauty and the Beast-style chateau hits market for £20million

A literal house of dreams (Picture: Jam Press/Christies International Real Estate/Disney) A stunning chateau that looks straight out of Disney’s Beauty and the Beast has gone on sale for a whopping £20,481,500.00 ($25,000,000). The incredible home has two acres of private land, a 2,000-bottle wine cellar, a movie theatre, gym, spa, pub, and staff quarters. […]

Get ready for an intense time… (Picture: Getty/Metro.co.uk) The next Full Moon is on May 16, 2022, and this time it’s in Scorpio… meaning an intense period lies ahead. Full Moons present more opportunity for reflection than action, they bring an insightful, illuminating, contemplative energy to our world and make us pause to think about […]