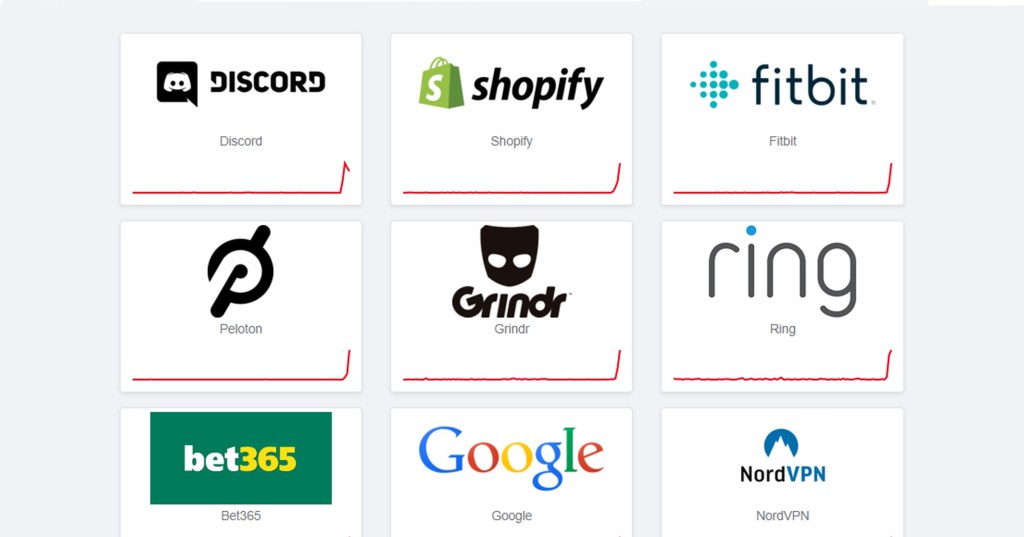 Some of the websites affected by the outage. (Credit: DownDetector)

Hundreds of websites around the world have gone dark following a major outage at content delivery company Cloudflare.

Anyone visiting websites such as Discord, Shopify, Peloton and JustEat are met with a ‘500 Internal Server error’ message.

Cloudflare is the most popular content delivery system on the web by some margin.

Hundreds of well-known brands use it to run their websites.

Cloudflare has acknowledged the problem and said it is working on a solution.

‘The Cloudflare team is aware of the current service issues and is working to resolve as quickly as possible. Updates can be followed here,’ it stated on its official Twitter account.

Jake Moore, Global Cybersecurity Advisor at ESET Internet Security explained: ‘There seems to be a problem with Cloudflare and a fix is being implemented but in the meantime users may be frustrated with the amount of services offline.

‘It just goes to show how the majority of the internet still funnels through a small series of lines which puts major pressure on these platforms which are designed to offer protection and reliability.

‘When problems occur, havoc can erupt in cyberspace. Unfortunately, these are becoming more commonplace.

This story is developing…

Mystery of strange spiral over New Zealand has been solved

Look out for number one today (Picture: Getty/Metro.co.uk) Today is a good day for going with the flow and not forcing anything. For creative types, just see where your mind takes you. But today is not one for doing stuff you’d rather not. Be peaceful, and you never know what inspiration might come to you. […]

Gemma Owen had Luca Bish declaring love with her lapdance (Picture: ITV/REX/Shutterstock) Luca Bish was ready to declare love for Gemma Owen in Tuesday’s episode of Love Island after she performed a sexy lap dance as part of a challenge.  The guys and girls of the villa were tasked with giving each other lap dances […]

Heartbroken Rylan Clark slept in mum Linda’s bed after devastating marriage split: ‘I didn’t know what he was thinking of doing’

Rylan Clark has praised his beloved mum Linda Clark for being his ‘entire support’ (Picture: Rex Features) Rylan Clark’s mother Linda was so concerned about his health following the end of his marriage that she made him sleep in her bed.  The Strictly: It Takes Two presenter went through a highly-publicised split from husband Dan […]