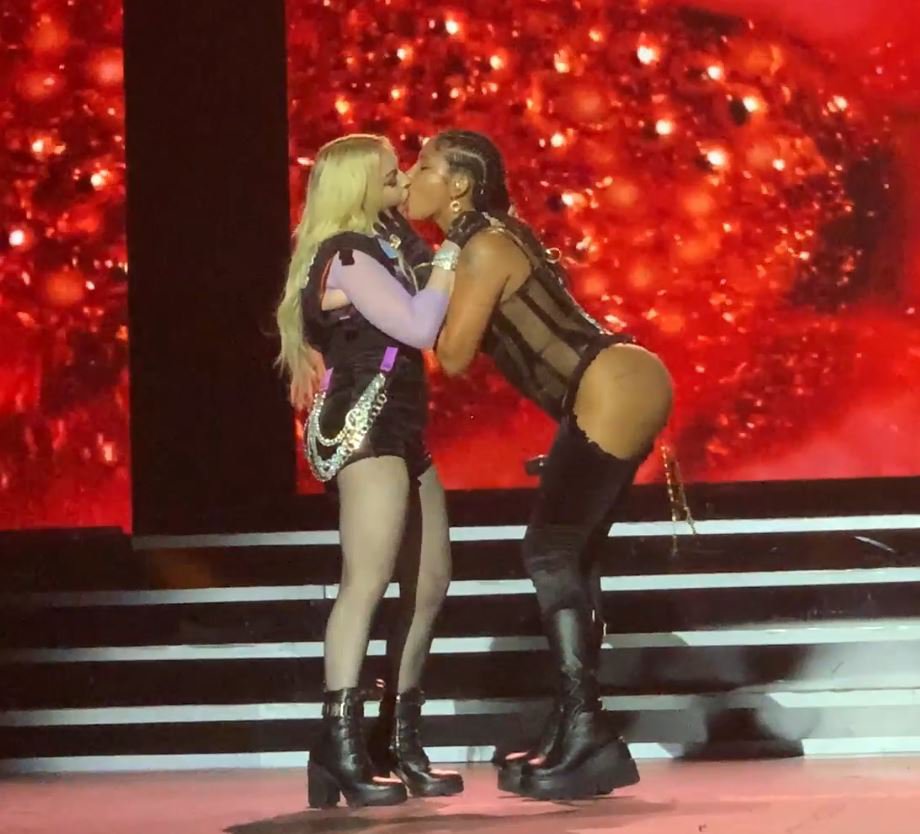 Madonna is no stranger to a risqué performance, or even an on-stage kiss – who could forget that iconic moment with Britney Spears at the 2003 VMAs?

And it seems like she doesn’t plan on slowing down with her racy antics, as the pop star shared a passionate snog with rapper Tokischa on stage in New York City.

Madonna, 63, was joined by Tokischa, 26, for a performance of her hit Hung Up, with the pair going in for a rather intense kiss at the end, before Madonna slapped Tokischa’s bum as she walked off the stage.

As to be expected, the crowd went wild when the heavy kiss happened, with the ladies physically unable to get any closer as they grabbed onto one another.

It was a pretty sensual performance throughout, to be honest, with some sexy choreography.

The performance was part of Madonna’s Finally Enough Love club date at Terminal 5 in NYC.

Madonna got frisky with rapper Tokischa during their performance of Hung Up (Picture: Matthew Rettenmund/SplashNews.com)

She was joined by Los Frailes-born Tokischa for the surprise set, whose songs include titles like Linda, Perra, and Singamo.

It was a last minute appearance, though, with the Live A Prayer hitmaker only announced recently as a performer for the show, in celebration of Pride.

As well as the timeless bop that is Hung Up, she performed some of her other biggest hits, with her set list including Vogue, Holiday, Material Girl and Ray of Light.

The pair larked around on stage with some playful choreography (Picture: Matthew Rettenmund/SplashNews.com)

In true Madonna fashion, she was dressed in a saucy outfit, donning sparkly black hot pants, a lace top and chains for the bash. Oh, and fishnets, obviously.

It wasn’t long ago that Madonna recreated her famous kiss with fellow pop queen Britney at the Toxic singer’s wedding to Sam Asghari, which Madonna attended alongside the likes of Selena Gomez and Paris Hilton.

The singers initially sent fans into a frenzy when they opened the 2003 Video Music Awards singing Madonna’s Like a Virgin, when Britney emerged out of a wedding cake while dressed as a bride, recreating Madonna’s 1984 VMAs performance.

Madonna is no stranger to a controversial performance or two (Picture: Matthew Rettenmund/SplashNews.com)

Christina Aguilera then joined the two on stage, but it was Madonna and Brit who ended up locking lips.

Years later in 2018, Dirty songstress Christina admitted that she felt left out of the moment, since she also kissed Madonna but claims it was not aired.

She said in a radio interview: ‘It was weird. And you know why they cut away for it? Because they cut away to get Justin [Timberlake’s] reaction.’

Mum thought her headaches were down to needing new glasses, but she actually had multiple sclerosis

Lauren Percival’s life changed when she went for an eye test (Picture: PA Real Life) When Lauren Percival started getting headaches aged 15, she was prescribed glasses. Headaches are a common symptom of uncorrected short-sightedness, so she chalked it down to that.  The debilitating pain persisted over the years, but Lauren thought this just meant […]

WHO chief ‘does believe Covid was leaked from a lab’

The public stance on the origins of the outbreak remains neutral (Picture: Reuters/Getty Images) The leader of the World Health Organisation (WHO) privately believes Covid was ‘leaked from a lab’, it has been claimed. Dr Tedros Adhanom Ghebreyesus privately confessed to a European politician the most likely cause of the outbreak was a catastrophic accident […]