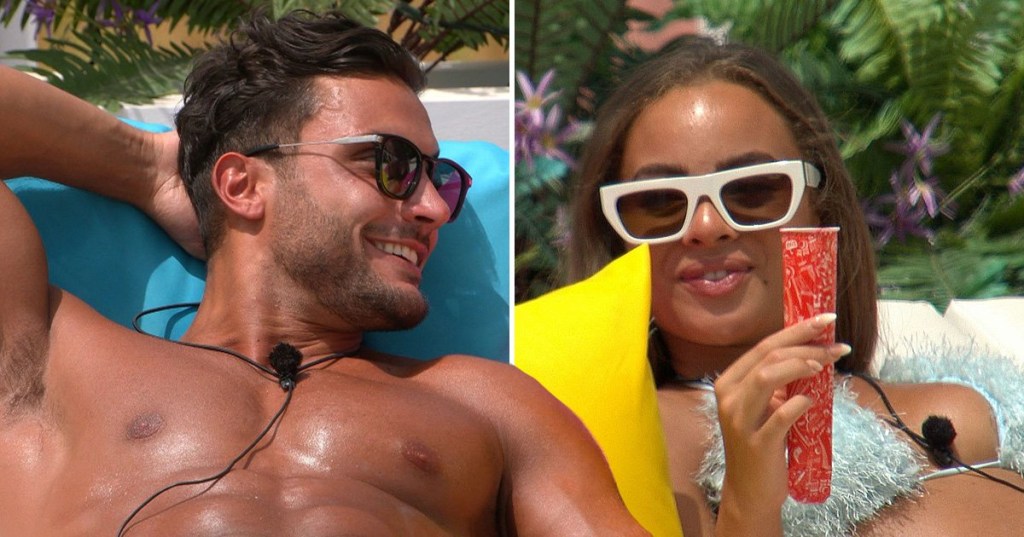 Love Island viewers were left with their jaws on the floor following Davide Sanclimenti’s ‘sloppy’ kiss with Danica Taylor.

The snog came well and truly out of the blue, and just moments after Islanders Jay Younger was branded ‘muggy’ by Ekin-Su Cülcüloğlu in an explosive row.

Even bombshell Danica was shocked after Italian stallion Davide went in for a rather intense kiss, unsure of quite what to say afterwards.

Danica had not yet formed a close bond with any of the other boys in the villa, but both her and Davide expressed a flirtatious interest in getting to know one another.

‘I do want to get to know you. Me and you are going to have a great time over the next couple of days,’ Davide said and the next thing we knew, he was all over Danica’s face like nobody’s business.

Viewers couldn’t believe what they were watching, with one joking that the kiss looking like Davide had ‘never eaten before.’

Davide was pretty pleased with himself for the ‘gift’ he gave Danica (Picture: ITV/REX/Shutterstock)

‘Davide was THIRSTY for that kiss,’ one person tweeted, while another wrote: ‘Davide’s kiss was so violent, I can’t explain it.’

One fan tweeted: ‘Davide kissed Danica like it was a comma in a sentence that was so so random.’

However, not everyone was so convinced that Davide kissed Danica because he likes her, with many viewers claiming he just did it for ‘bants’ or to ‘shut her up.’

Davide will kiss anyone and everyone in that villa #LoveIsland pic.twitter.com/6mR2nlXuzn

Others argued his ulterior motive was to ‘secure his place in the villa’ with the steamy action, despite him telling cameras later on that his kiss to Danica was a ‘gift.’

‘”I made her day probably” Davide he really feels like God’s literal gift to women,’ a Twitter user laughed.

Even Danica was shocked when Davide went in for a smooch (Picture: ITV/REX/Shutterstock)

But, it wasn’t long until Davide had his head turned by new bombshell Antigoni Buxton, suggesting that she might be on the receiving end of one of his ‘gifts’ at a later date.

Please slow down, Davide, we can’t keep up!

While Davide is busy cracking on with the single gals, there’s been trouble in paradise for some of the happy couples, like Paige Thorne and O’Neill, with Paige in tears after Jay got her …read more

UK weather: How long will the heatwave last and what is the forecast for the rest of the week?

The heatwave is set to continue for the next few days – but sunseekers should be cautious (Picture: Getty Images) The UK is finally enjoying a spell of hot weather after weeks of low temperatures, rain and wind across the country – and it’s come just in time for the start of summer. The current […]

Joseph Quinn has got us excited with talk of a massive guitar scene (Picture: Netflix) Stranger Things season 4 volume 2 is right around the corner and fans are desperate to know what fates await Eleven (Millie Bobby Brown) and the rest of the gang. While the cast has been fairly tight-lipped about what’s in […]

Heather Wheeler made the disparaging remarks at a policy launch event (Picture: Getty) A Tory minister has been branded ‘ignorant’ after getting caught out insulting Blackpool and Birmingham. Heather Wheeler referred to both towns as ‘godawful’ during a launch event for the government’s new digital policy. The South Derbyshire MP has apologised for the comments, […]