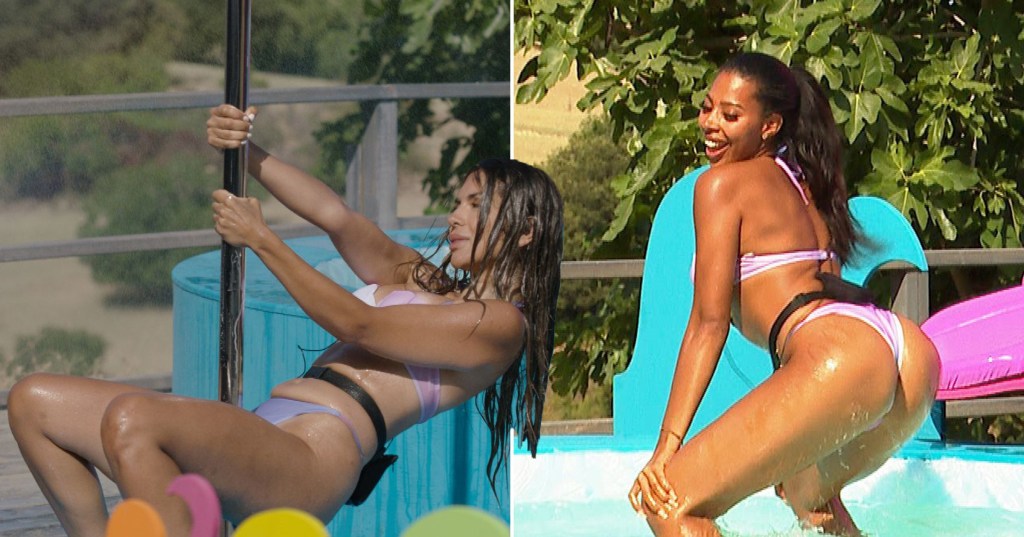 Things are getting steamy! (Picture: ITV)

Love Island is turning things up a notch as Ekin-Su Cülcüloğlu takes on a sexy pole dancing challenge.

Not only that, but Amber Beckford will also be getting her twerk on, as the girls battle it out for the affections of the boys.

New wet and wild pics show Turkish actress Ekin-Su well and truly putting on a show as she swings around a pole in her bikini.

As she shows off her best moves, the other gals spray her with water, with Ekin-Su determined for all eyes to be on her.

In other fun and flirty scenes, Amber also shakes her booty in the paddling pool, pulling out all the stops and doing what she can to get her man.

The x-rated scenes come as Davide Sanclimenti is set to dump Ekin-Su in front of the whole vila tonight, after the 27-year-olds were recoupled together.

But Amber gave her a run for her money with her twerking (Picture: ITV/REX/Shutterstock)

But, their romance was short lived, as Italian stallion Davide was quick to brand Ekin-Su a ‘liar’ and an ‘actress’ in a dramatic showdown.

The split follows Jay Younger’s confirmation that he did, in fact, meet up with Ekin-Su and kiss her last night.

Of course, Davide had no idea about their shenanigans, with viewers outraged by the scandalous scenes.

As Davide confronts Jay to find out what is going on between the two of them, he begins: ‘Just a quick one, honestly, as you saw I don’t have nothing with you, were you on the terrace before with Ekin-Su?’

There’s about to be fireworks between Ekin-Su, Davide and Jay (Picture: ITV)

Ekin-Su – who was watching on with the other Islanders – jumped to defend herself, saying it wasn’t ‘technically cheating’ as Jay didn’t say she was his girlfriend.

Davide was having none of it, though, ending their relationship with an audience.

‘I hope you find the love of your life because me and you are closed’, he added.

Congratulations to newlyweds, Karen Hauer and Jordan Wyn-Jones! (Picture: Hello!) Strictly Come Dancing pro Karen Hauer surprised everyone recently with an announcement that she had married parter Jordan Wyn-Jones – and we finally have all the gorgeous pics! The dancer enjoyed her big day in the countryside in Hampshire, with close friends and family in […]

Shoppers will be able to order 2,000 goods online (Picture: Getty Images) Primark is set to trial a new Click-and-Collect service in the UK, in the fashion chain’s first big move into online shopping. The high street retailer will launch the trial later this year across 25 stores in northwest England and will focus on […]