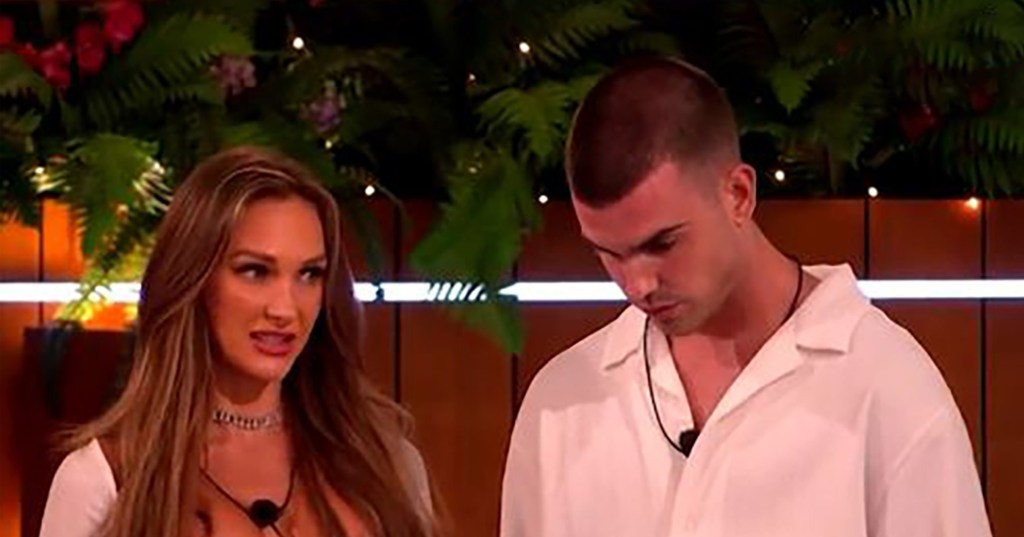 Tonight’s Love Island is set to amp up the drama, as Jessie Wynter and Aaron Waters face the awful decision of having to dump two of their fellow islanders.

During yesterday’s episode of the ITV2 series, it was revealed that six contestants were up for elimination in a public vote – Anna-May Robey, Tanya Mahenga, Tanyel Revan, Tom Clare, Haris Namani and Kai Fagan.

In a brutal twist, it was revealed that Jessie and Aaron – two former Love Island Australia competitors who recently entered as bombshells – would have to decide which two people would be dumped from the villa.

It was claimed that Haris is set to be eliminated from the show, shortly after footage emerged of him punching another man in an incident that took place last May.

In a new clip released ahead of Wednesday’s instalment, Jessie and Aaron go off for a private chat to consider all of their options.

‘I don’t even know where to start,’ Aaron admits, before adding: ‘We’re in here to find love and grow together.’

Jessie and Aaron have a tough choice to make (Picture: ITV2)

When they rejoin the other islanders, Jessie addresses them all around the firepit to reveal what they’ve chosen to do.

‘This decision has been so, so difficult to make. However, we had to make our decision off who we think has the most potential to continue to grow and develop,’ she explains. ‘Therefore, the islanders we have decided we are sending home tonight are…’

Then, Jessie can be heard sounding choked up off-screen, as she insists: ‘I’m so sorry.’

At the reveal of the dumped islanders, Zara Lackenby-Brown covers her mouth in utter shock, while Ron Hall looks similarly astonished, leaning back on his seat with his hands on his head.

So who will Jessie and Aaron decide to axe from the series?

Love Island returns tonight at 9pm on ITV2 and ITVX.

It doesn’t always take two to tango (Picture: Getty) This article contains affiliate links. We will earn a small commission on purchases made through one of these links but this never influences our experts’ opinions. Products are tested and reviewed independently of commercial initiatives. Sex with a partner can be great; exploring each other’s bodies, […]

Smith wins in Manchester Liam Smith has secured a knockout victory over Chris Eubank Jr in their Manchester grudge match. After a bad-tempered build-up between the two were personal insults were exchanged at will, the Liverpudlian settled their score with a an emphatic x round finish. 34-year-old Smith, a former light-middleweight champion, is well positioned […]