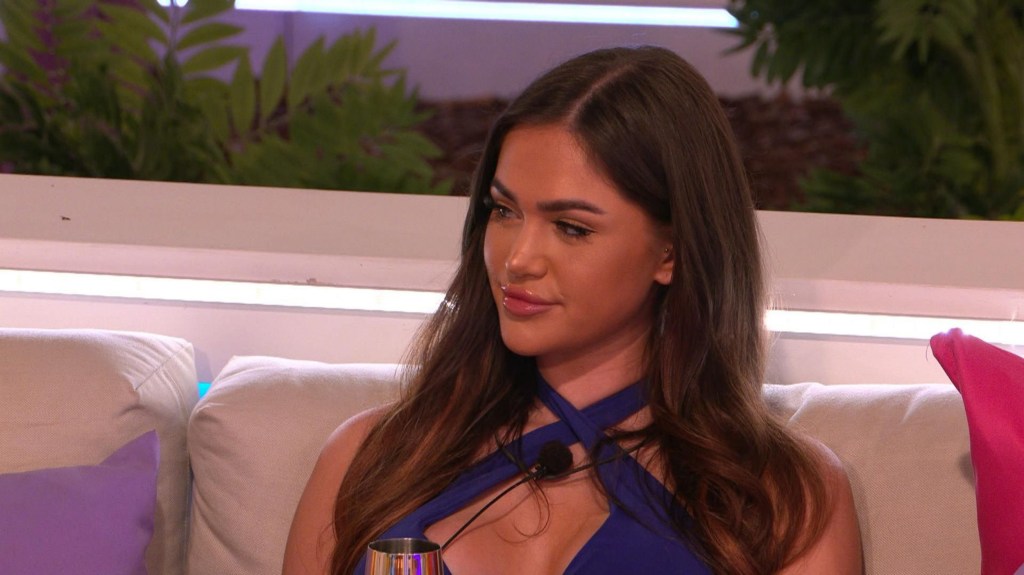 Winter Love Island stars Haris Namani and Anna-May Robey’s time in the villa came to an end during Wednesday’s episode.

In Tuesday’s edition, fans were shocked to discover that Australian newcomers Jessie Wynter and Aaron Waters would be the ones making the casting vote after Anna- May, Tanya Mahenga, Tanyel Revan, Tom Clare, Haris, and Kai Fagan were left vulnerable.

‘We had to make our decision on the one we think has the most potential to grow and develop,’ she said.

‘We personally think these two people have had loads of opportunities, but don’t know if this is much better they can go.’

Jessie revealed that she and Aaron decided it was time for the 20-year-old payroll administrator, and the 21-year-old TV salesman to leave the villa.

Anna-May was coupled up with Kai but later revealed that she didn’t feel a spark (Picture: ITV)

Following their exit, Haris said: ‘I had the best experience of my life, but if it’s time it’s time.’

Echoing a similar sentiment, Anna-May hailed her Love Island journey the ‘experience of a lifetime.’

According to insiders, a new bombshell is set to ruffle some feathers in tonight’s episode, which could create a spanner in the works for farmer Will Young.

‘The lads better get grafting as the new boy is extremely charming and an absolute stunner – jaws will be dropping when he walks in,’ a source spilled.

They added to The Sun: ‘Expect heads to turn and every couple in there to be threatened.’

Say what you want about Zara Lackenby-Brown, she didn’t deserve to be dumped from Love Island

Zara understood the bombshell assignment through and through (Picture: ITV) After Zara Lackenby-Brown branded former beau Tom Clare ‘community penis,’ I believed another star was going to be added to the Love Island hall of fame. However, her premature exit from the show last night has seen my interest in this season revert back to […]

Mr Ardley was given his first criminal conviction at 75-years-old after he damaged the expensive car (Picture: BNPS / CPS) A pensioner keyed his new neighbour’s £60,000 car after getting into a row with him over a resident’s association. Keith Ardley, 75, told Marius Crisan, 40, to ‘pipe down’ just weeks after he moved into […]