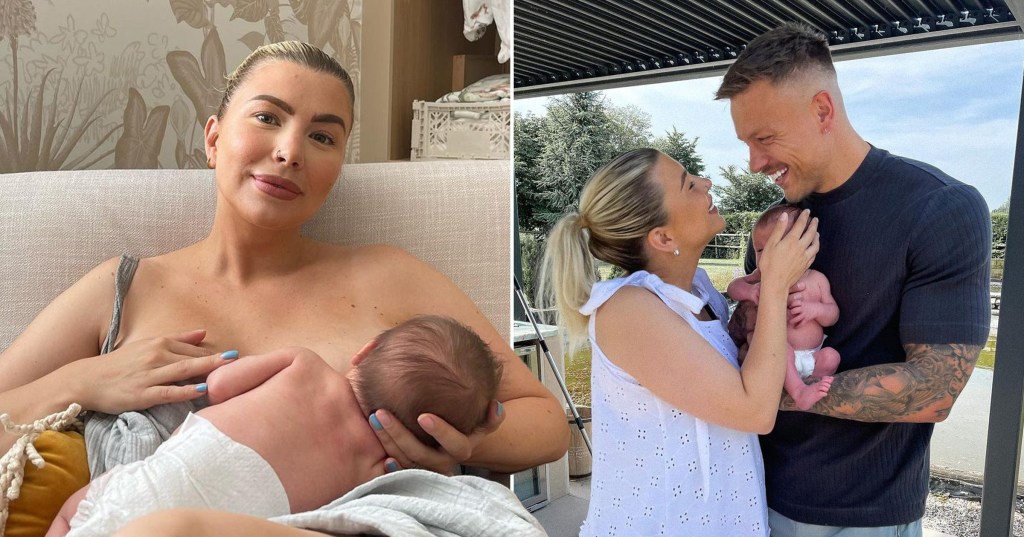 Olivia Bowen was worried about motherhood and the idea of breastfeeding before welcoming son Abel in June (Picture: Olivia Bowen/Instagram)

Olivia Bowen has said she felt she would be ‘so rubbish as a mum’ and never thought she would breastfeed before the birth of her son Abel.

The 28-year-old Love Island star gave birth to her first child with husband Alex – who she met on the dating show six years ago – on June 10.

Olivia really opened up her heart and soul as she talked about her experience of becoming a mother as part of World Breast Feeding Week, admitting that she never previously felt maternal and that the idea of breastfeeding initially ‘freaked’ her out.

Alongside images of herself feeding her son – with one picture showing her looking teary-eyed and emotional while lying on the floor – she wrote: ‘I never thought I would breastfeed.

‘I think where I felt like I was not a maternal person whatsoever before Abel was born, I had serious doubts it would work for me & I also didn’t even feel comfortable with the thought of it!

‘I would go as far as to say it freaked me out a bit. You all know I wasn’t sure on having kids & it’s mainly because I felt like I would be so rubbish as a Mum, not a maternal bone in my body pre Abel.

‘I would go as far as to say it freaked me out a bit,’ said Olivia, speaking about breastfeeding (Picture: Olivia Bowen/Instagram)

‘Fast forward to when Abel was born & he first latched in the hospital it couldn’t of felt more natural. The bond & connection I feel with him when feeding I will be forever grateful for.

‘It’s not always easy, those first few weeks the emotions are no joke. I had a couple of days where he wouldn’t latch properly & I felt like a complete failure, I felt like I was failing myself & failing him – even though I told myself before I wasn’t bothered about breastfeeding.

‘The first week I was squeezing my engorged boobs over the bath, I woke up with wet sheets from leaking & I constantly worried about how much he was getting & was it good enough?!

‘I was convinced I would stop breastfeeding after a month, then told myself 3 months & now I’m saying 6! There is no feeling like it.

However, the Love Island 2016 star is now so in love with feeding her son, she keeps extending the amount of time she says she’ll do it (Picture: Olivia Bowen/Instagram)

Olivia and Alex met and fell in love with each other six years ago on Love Island, and became parents two months ago (Picture: Olivia Bowen/Instagram)

‘When his little eyes look up at me & when he goes all sleepy & content. So close to you who am I!!!! I would never have imagined to be writing this.’

She said she has learnt to …read more

Donald Trump on Monday demanded the affidavit that allowed the FBI raid of his Florida home (Pictures: Reuters/AP) Former President Donald Trump on Monday called for the ‘immediate release of the completely Unredacted Affidavit’ that justified the FBI raid of his Mar-a-Lago home. Trump made his demands known on his Truth Social late Monday evening, […]

The bargain comes with a price (Pictures: BBC) Suki Panesar (Balvinder Sopal) struck a bargain with Ranveer (Anil Goutam) in tonight’s EastEnders – but her celebrations immediately turned sour as it became clear that Ranveer expected their relationship to encompass far more than business in return. Having earlier gone to Vinny (Shiv Jalota) for help […]

Call Of Duty: Warzone 2 will get proper reveal in ‘era defining’ live stream

The game’s still scheduled for a 2022 release date so we should get a release date (pic: Activision) Activision has a big Call Of Duty live stream in September; one that will share some actual information the elusive Warzone sequel. Despite launching later this year, we have yet to see anything of the sequel to […]