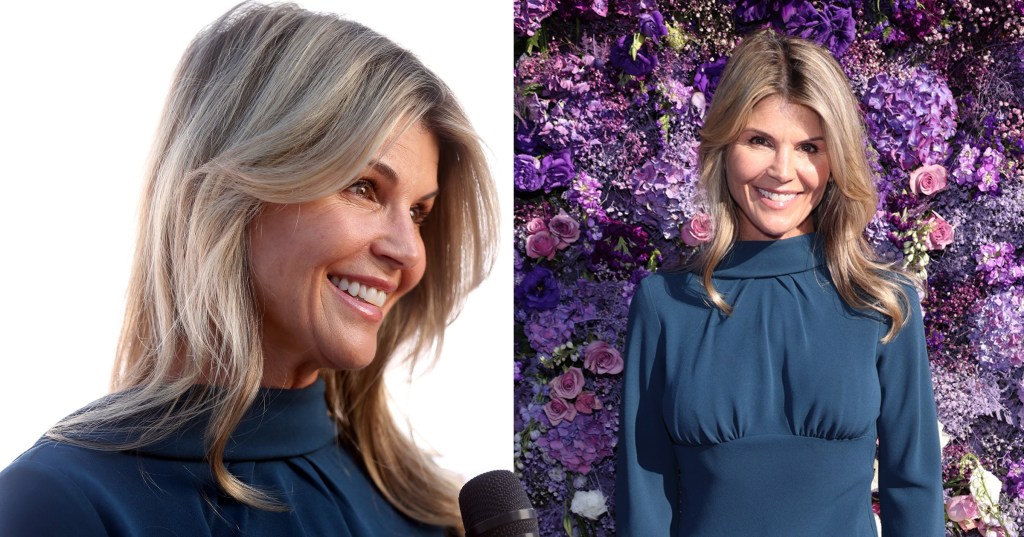 Actress Lori Loughlin made her first red carpet appearance in more than three years on Saturday, following the college admissions scandal that saw her and her husband serve time in prison.

The Full House star attended the DesignCare 2022 Gala to benefit the HollyRod Foundation on Saturday in Los Angeles.

The 57-year-old, who was enjoying success on Hallmark series When Calls the Heart ahead of her scandal, wore a chic dark teal knee-length dress with puff sleeves.

She accessorised her outfit with a shimmering box clutch and strappy metallic sandals with block heels.

Lori also wore her dark blonde hair loose and in gentle waves as she posed for pictures on the event’s purple carpet, which featured a gorgeous flower wall of white, pink and purple blooms.

Lori smiled for the cameras at the fundraiser (Picture: Getty)

She has kept a low profile since being released from prison at the end of 2020 (Picture: Getty)

She also posed inside the function with her arm around host and long-time pal Holly, with both women smiling widely for the camera.

This marked her first official red carpet appearance since a February 2019 gala for The Women’s Cancer Research Fund, which she attended with her two daughters, Olivia Jade, 22, and Bella, 23, according to Page Six.

TV star Lori, best known for her part as Rebecca Donaldson, aka Aunt Becky, on Full House and its Netflix reboot Fuller House, served two months in prison in 2020 after pleading guilty to commit wire and mail fraud.

She posed inside with host and friend Holly Robinson Peete inside (Picture: Getty)

The FCI Dublin facility in California where the actress did her time was the same low-security facility where Desperate Housewives’ star Felicity Huffman served her sentence in relation to the college admissions scandal.

Lori’s husband Mossimo Giannulli served a five-month sentence for his part in the crime.

They were two of the 53 people charged as part of a college admissions scam, organised by Rick Singer.

With daughters Olivia Jade and Isabella at her last red carpet in 2019 (Picture: Getty)

The pair were accused of paying Singer $500k (£408k) to get their two daughters, one of which being YouTuber Olivia Jade, into the University of Southern California as members of the college rowing team, despite neither of the girls ever rowing before.

The sisters are no longer enrolled at USC, and …read more

Antony is a wanted man in the Premier League (Picture: Getty Images) Tottenham Hotspur believe they can beat Manchester United to Ajax winger Antony, by offering Steven Bergwijn as part of a deal for the Brazilian. The 22-year-old has impressed since moving to Ajax from Sao Paulo in 2020, since winning nine caps for his […]

Joram Nechironga was given a deportation order to Zimbabwe by the Home Office (Picture: PA) A British Army veteran who has lived in the UK for over 20 years is ‘living in fear each and every second’ of being deported to Zimbabwe. Joram Nechironga, 42, served in Iraq during his five years in the armed […]