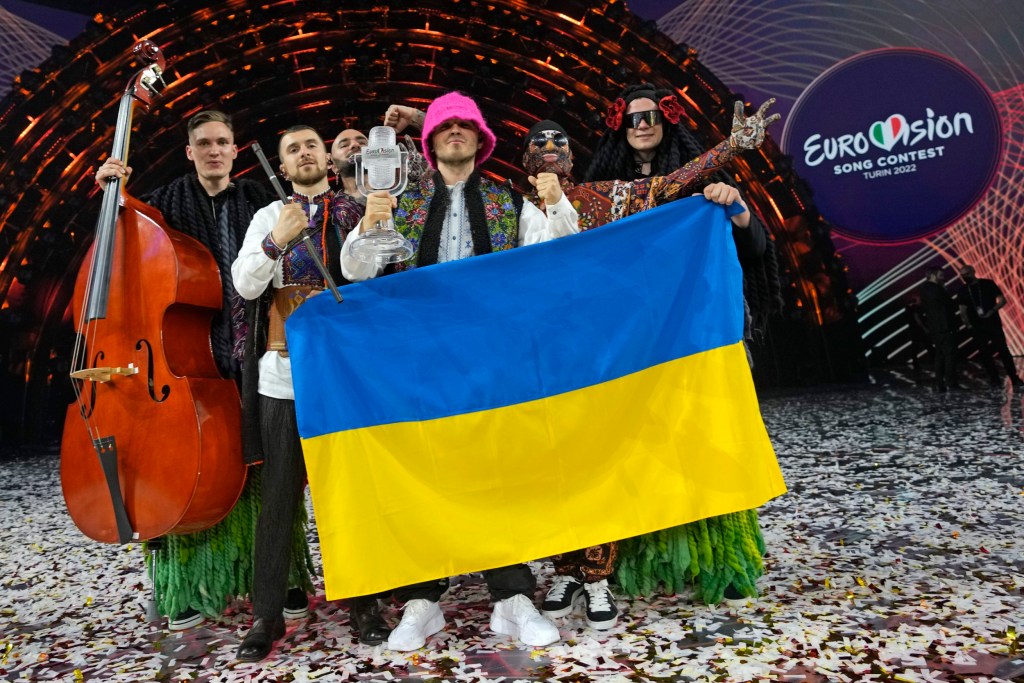 It remains to be seen which city will take on hosting duties and honour Ukraine (Picture: AP)

Liverpool has offered to host the next Eurovision Song Contest in solidarity with Ukraine in 2023, after it was announced that last year’s winners will not hold the show in their country next year.

The city was quick to offer itself as host after the European Broadcast Union on Friday confirmed it is looking for another location as this year’s winners is battling invasion from Russia.

An approach to organisers has been made by Liverpool, England’s only Unesco City of Music, and the city is preparing to draw up plans which would look at options for venues and the opportunity to reflect Ukraine’s culture in a schools and communities programme.

Mayor of Liverpool, Joanne Anderson, said: ‘We stand in solidarity with the people of Ukraine and would like the opportunity for Liverpool to host the 2023 Eurovision Song Contest and in doing so pay tribute to their wonderful country.

‘We are an events city and no one can stage a party like us.’

She added: ‘Culture is synonymous with Liverpool and we tick all the boxes to be next year’s host, great venues, enviable experience, a world-renowned music heritage, Unesco City of Music status and of course the warm Scouse welcome that just can’t be beaten.’

Anderson said the event would become ‘a beacon of hope around the world’ and she hopes that Liverpool as ‘an unrivalled music brand is given serious consideration by the decision-makers.’

Director of Culture Liverpool, Claire McColgan CBE, added that ‘the joy, colour and exuberance of Eurovision is intrinsically Liverpool’ and she believes the event is a ‘perfect match’ for the nothern city.

‘This city knows how to stage an event, and more importantly how to stage it appropriately given the circumstances in which it has come to the UK.’

She assured that ‘Liverpool is committed to doing all it can to mark, honour and promote Ukraine during the event and in doing so, ensure the global platform is used to celebrate national identity, creativity and extraordinary resolve.’

Major of Liverpool Joanne Anderson would love the city to host the contest next year (Picture: PA)

Britain’s Sam Ryder topped the jury vote in Turin in May but Ukraine’s Kalush Orchestra went on to win overall after a symbolic show of public support which saw them soar to first place with 631 points.

However, Liverpool aren’t the only city offering to host the Eurovision Song Contest next year, with the capital also offering their venues.

In a tweet, Mayor Sadiq Khan expressed his support for London hosting the contest, saying Londoners would ‘welcome Eurovision with open arms.’

A resident has told how he found locals rescuing a man from a house that was destroyed in a suspected gas explosion (Picture: PA) A resident who felt the force of the blast that killed a woman at a house in Birmingham has said it was a ‘miracle’ that no other lives were lost. Ehi […]

The cave sits below Pembroke Castle in Wales (Picture: Getty Images / Wales News Service) This 10,000-year-old cave in rural Wales is the stuff of every history lover’s fantasy. It holds deep and fascinating secrets even the likes of ancient explorers would find intriguing. Nestled under Pembroke Castle in west Wales, the cave boasts the […]