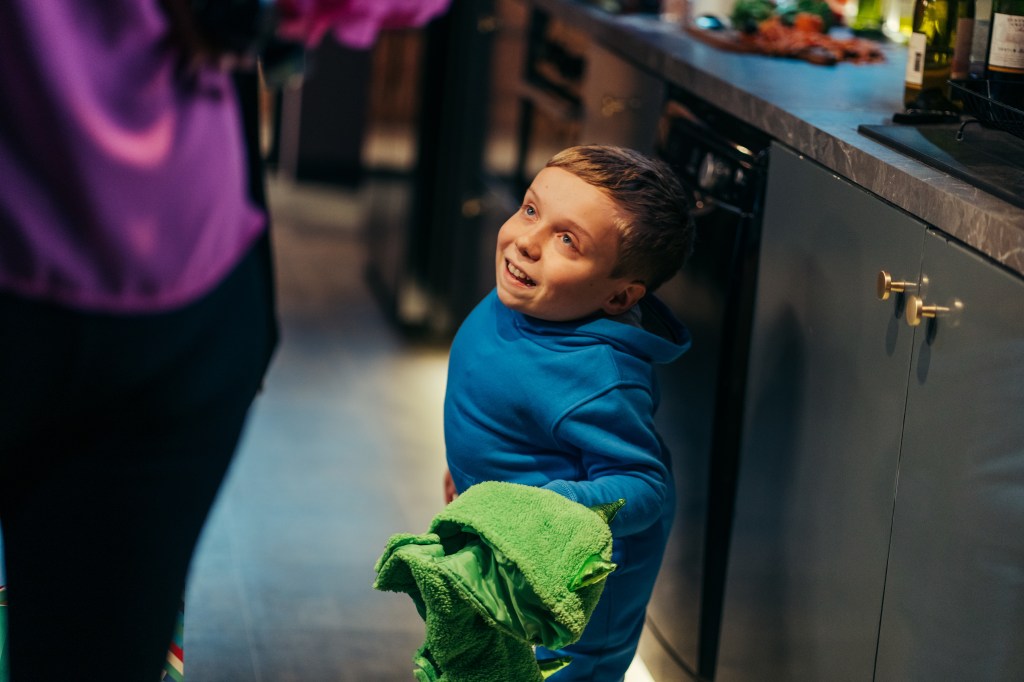 Am I Being Unreasonable? star Lenny Rush has revealed that nearly all of his scenes in the BBC One dark comedy were actually improvised.

The series, which stars Daisy May Cooper, follows Nic (Daisy) navigating her grief and trauma following her former lover’s death, as well as struggling with her dead-end marriage and making friends in a bougie Cotswolds village.

Lenny, who has Spondyloepiphyseal Dysplasia congenita a condition that affects his growth, resulting in dwarfism, plays Nic’s son Ollie, and the two have a hilarious on-screen bond, completed by Ollie’s sassy comebacks.

Speaking exclusively to Metro.co.uk, Lenny shared: ‘A lot of it was, honestly all the scenes I’m in, I don’t think there’s one scene where I don’t go off a little bit, there’s always a little change, even if it’s slight.’

The ten-year-old added that he knew going into the series he may be going off script, saying: ‘I think Daisy’s done a bit of that before, so we were told even in the auditions that there would probably be quite a bit of improv, so you know trying to get used to that and things.’

Lenny continued: ‘At first it was nerve-wracking but I was lucky to have Daisy there because she’d done it before, so she helped me out on things and after the first few days I got right into it, I love it now.’

Lenny added that he likes playing his character Ollie, ‘because he’s a more modern day character,’ compared to other roles he’s had, including ‘cheeky’ Morgan in CBBC series Dodger and Tiny Tim in the BBC’s adaptation of A Christmas Carol.

In one particular scene from the series, a hilarious moment occurs when Ollie does the classic crackling-phone trick to avoid talking to his grandmother.

But it turns out, the whole scene was improvised!

‘There’s a scene on my birthday morning with wrapping paper on the phone, yeah that was improvised,’ Lenny recalled.

He added that another scene, when he ‘stacked prawn crackers on Daisy’s head,’ was also unplanned.

He told us: ‘Daisy just said, “Why don’t you stack some prawn crackers onto my head,” so there we go.’

Am I Being Unreasonable? is available to watch on BBCiPlayer and Dodger Christmas Special airs on Sunday, December 4 on CBBC at 5.35pm.

If you’ve got a celebrity story, video or pictures get in touch with the Metro.co.uk …read more

The England skipper donned FIFA’s anti-discrimination armband instead (Picture: Getty) England’s players took the knee prior to kick-off in Monday’s World Cup opener against Iran after earlier U-turning on wearing a OneLove rainbow armband. The Three Lions have long made the anti-racism gesture before matches, though did not do so in September’s Nations League games […]

Jill looks back on her Euros win with real pride (Picture: James Gourley/ITV/Shutterstock) I’m A Celebrity… Get Me Out Of Here! star Jill Scott may be a football success story now, but her rise to the top wasn’t smooth. Opening up to her I’m A Celebrity campmates, Charlene White and Scarlette Douglas, the sporting star […]

Mbappe would cost United at least £150million (Picture: Getty) Manchester United are targeting a sensational move for Kylian Mbappe as a replacement for Cristiano Ronaldo. The Old Trafford club are prepared to cut ties with the five-time Ballon d’Or winner following his explosive interview with Piers Morgan where he accused United of ‘betraying’ him. Ronaldo […]