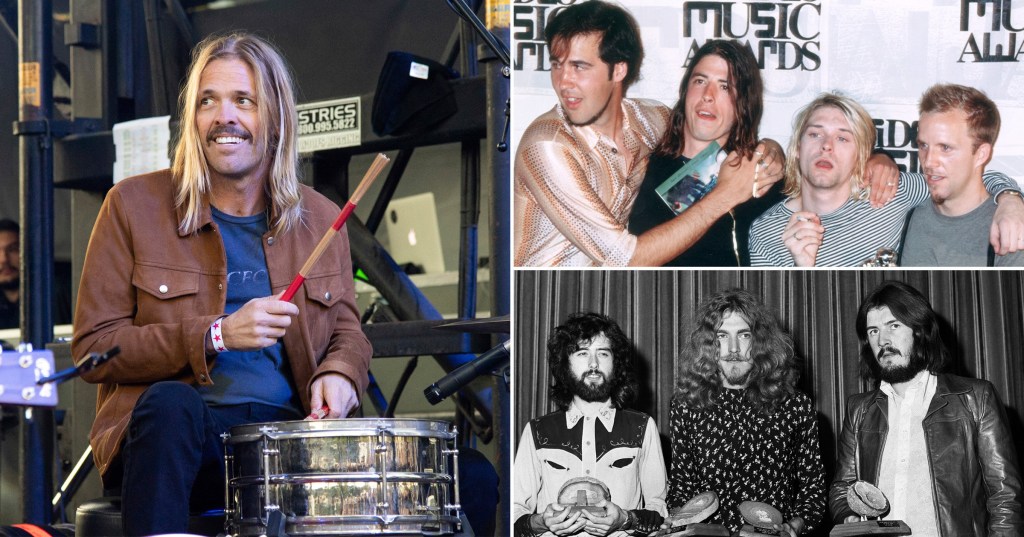 Led Zeppelin and Nirvana stars are set to rock the stage at a concert in memory of Foo Fighters drummer Taylor Hawkins, who died in March.

Already on the billing are the likes of Mark Ronson, Chrissie Hynde and Supergrass.

American comedians Chris Rock and Dave Chapelle will also take to the stage for a special set.

The show will be followed by another tribute concert on September 27 at the Kia Forum in Los Angeles, with performances from Chad Smith from the Red Hot Chili Peppers, Miley Cyrus and Alanis Morissette, who Hawkins toured with before joining the Foo Fighters in 1997.

The gig proceeds will go towards charities to be announced at a later date, according to the band.

Hawkins, performing with Foo Fighter at the Fonda Theatre this February, died in Colombia the following month (Picture: Getty Images)

The concerts are also expected to be Foo Fighters’ first since Hawkins died in March at the age of 50 in his hotel room while touring with the band In Bogota, Colombia.

An official cause of death is still pending, but a preliminary toxicology report showed traces of 10 substances in his body, including opioids.

Hawkins had been in the band, fronted by former Nirvana drummer-turned-lead singer Dave Grohl, for more than two decades.

He’d also starred with the band in their recently released film, Studio 666.

Brian May of Queen, pictured with the late rocker in 2006, is one of the big names slated to perform at the upcoming Wembley concert (Picture: FilmMagic)

The star with his daughter Annabelle and wife Alison at the Los Angeles premiere of Studio 666 in February (Picture: FilmMagic)

His wife Alison previously released a statement thanking fans for their support.

‘Taylor’s endearing spirit and deep love of music will live on forever through the collaborations he so enjoyed and the catalog of songs he contributed to and created,’ she wrote.

What I Rent: Oriana, £2,000 a month for a one-bedroom flat in Canning Town, London

‘In celebration of his life, it is now up to all of us who loved him most to honor Taylor’s legacy and the music he gave us.’

Kyiv Pride has endured violent opposition for 10 years but is still standing today (Picture: Getty) On Saturday, 430 miles from their home city, a small group of Ukrainian LGBTQ+ activists will march through Warsaw. With any prospect of gathering in their own capital curtailed by war, Kyiv Pride will instead remind the world of […]

It’s time to reflect (Picture: Getty/Metro.co.uk) It’s time to pull the band aid off and begin to heal. It’s not always easy to face your past, but if you never look back and find peace with it you will find moving forward impossible. It may be a friend is in need, or perhaps something has […]

Interpol said it raided a number of call centres suspected of telecommunications or scamming fraud (Credits: Getty Images) Interpol has successfully cracked down on a global scam operation that led to the interception of around $50 million (£40 million) worth of illicit funds. On Wednesday, Interpol announced the arrest of 2,000 suspects and the freezing […]