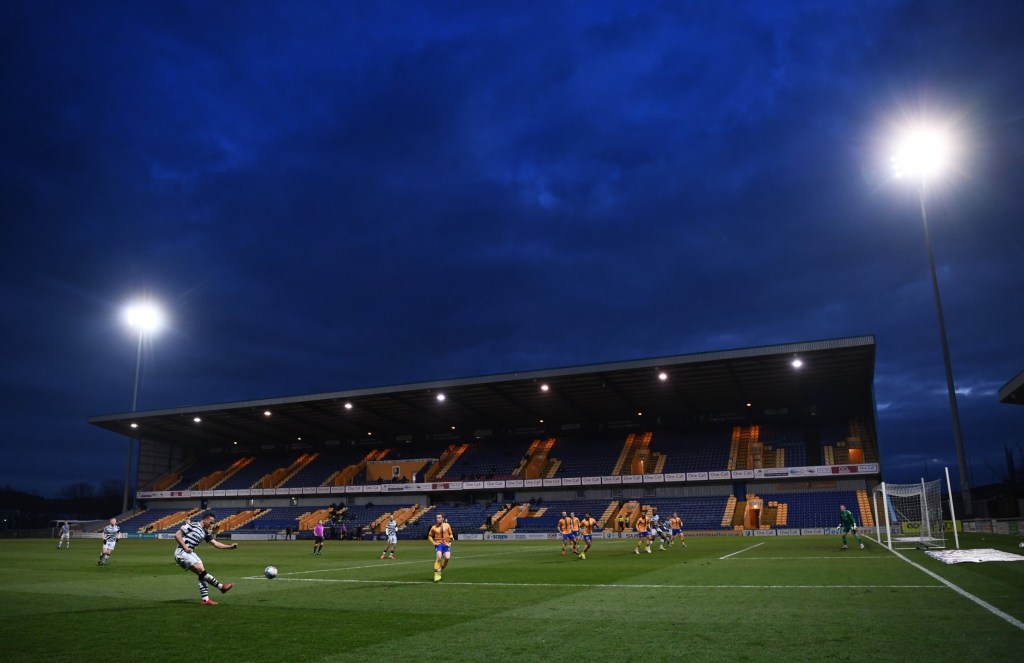 A lower league football team says soaring energy prices have forced it to bring forward the kick off time of a fixture next month.

Mansfield Town’s League 2 match against Walsall will now begin at 1pm rather than 3pm, in an apparent attempt to save money on floodlight costs.

It is hoped that earlier start times will allow the club to pay less for energy when the afternoons become colder and darker – with the Saturday, October 15 game serving as a trial run.

The move comes with many clubs in the English Football League (EFL) struggling financially – even as the Government announced a relief package for businesses facing soaring energy costs, including football clubs.

It is unclear if many other clubs will follow The Stags’ lead.

But there are fears that amid the cost of living crisis, with disposable incomes rapidly declining, community clubs will be hit by the double whammy of lower gate receipts as well increasing costs.

In a statement, the club explained yesterday: ‘Mansfield Town’s Sky Bet League Two encounter at home to Walsall on Saturday 15 October will now kick-off at the earlier time of 1pm.

‘The match was originally scheduled to get underway at 3pm.

The club had previously moved a Saturday afternoon fixture to a Friday night (Picture: Mansfield Town)

‘The club is endeavouring to mitigate the forthcoming, considerable increase in energy bills.

‘As part of these efforts, the earlier kick-off time will enable the club to discern whether significant savings can be made on floodlight usage and other energy costs.’

However, some Stags fans were unimpressed by the move.

On Twitter, Benedict Mason replied to the news by writing: ‘I don’t understand why you’d do this, whilst also moving the Hartlepool game from a Saturday to a Friday night where the floodlights will need to be used for the entire game?’

That game will now kick off next Friday at 7.45pm, instead of the following Saturday afternoon, the club announced last month.

Following the latest fixture change, fan Peter Hrycaj said on social media: ‘What about people who work Saturday mornings? Are they considered?’

Andy Squire branded the move ‘a bad decision’, suggesting it could result in the loss of at least 1,500 fans attending the game.

‘Owen’ wrote: ‘Already booked my trains. Ridiculous’, while others highlighted how the move could impact fans’ pre-arranged plans for Saturday mornings.

The EFL is planning to engage further with clubs about the impact of rising energy costs and the issue will be discussed at a meeting next, Metro.co.uk understands.

Yet earlier kick off times pose other problems, notably on travel and attendance levels for away fans.

Wintry weather could also force clubs to use their floodlights regardless of the kick off time later in the year and into the early part of 2023.

Your daily horoscope for Tuesday, September 20, 2022

Aries, your hard work will pay off for you (Picture: Getty/Metro.co.uk) Positivity, creativity and putting our noses to the grindstone seem to be the order of the day. There are lots of vibes going around today and it’s all a bit of a whirl as we look at things in our lives that may well […]

Sherri Papini, the California mother who faked her own kidnapping, sentenced to 18 months in prison

Sonos’ latest product: the Sub Mini (Credit: Sonos) Sonos has revealed the latest product in its home theatre line-up designed to offer a boosted bass in smaller spaces. The Sub Mini subwoofer is a smaller, cheaper woofer than the company’s current Sonos Sub but packs in plenty of audio tech. Like all Sonos speakers, it […]