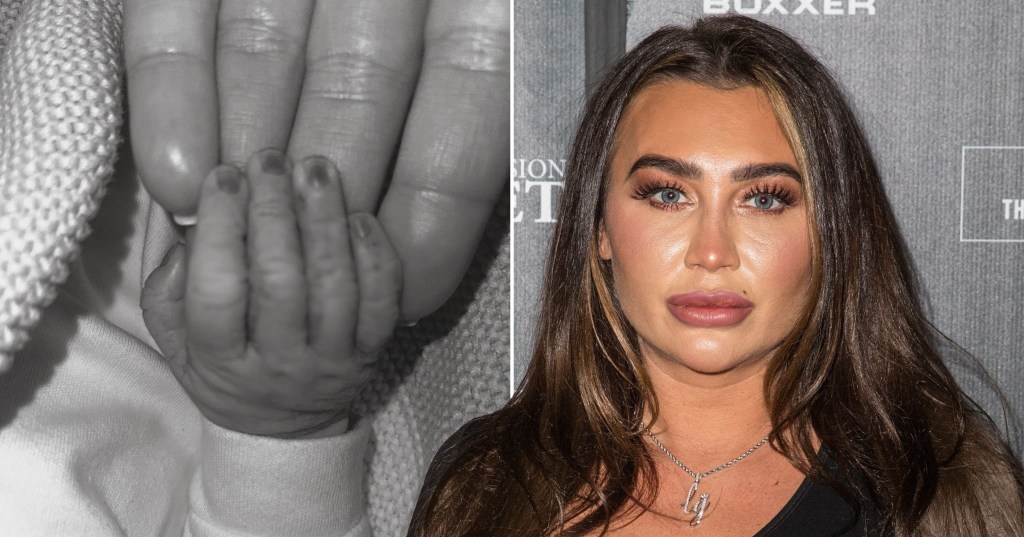 The former Towie star shared in July Lorena died shortly after birth, with Lauren sharing she didn’t suffer any pregnancy or labour complications.

Now, in an emotional post on Tuesday, Lauren, 35 – who also shares daughter Larose, one, with partner Charles Drury – shared she ‘fell in love’ with her second daughter.

She wrote on her Instagram Stories this week: ‘I carried you, I felt you grow.

‘Longed for the day we’d meet. Dreamed of your future. Not only did I know you, I fell in love with you.’

Lauren recently explained that she plans on having a post-mortem to determine what caused Lorena’s death, ‘for her own sanity’, as she didn’t experience complications during pregnancy, which she described as ‘textbook’, or the labour itself.

According to Lauren, Lorena was born with two knots in her cord, but babies are usually still able to get enough oxygen.

She’d planned on having a home birth led by her midwife Tamzin, and started having contractions while breastfeeding daughter Larose. However, Tamzin couldn’t hear a heartbeat and so called an ambulance which rushed Lauren to the hospital.

Describing her body as ‘unsettled’ and saying it feels like it’s ‘missing a newborn’, she told New magazine: ‘It shouldn’t happen. It breaks my heart that I won’t see her grow up.’

The TV star went on to explain how she ‘never ever thought I would have to plan a funeral for my child’.

She added: ‘I’m healing. I’m still bleeding – I feel like I’ve been run over.

‘I’m not getting anywhere by blaming myself. I have to try and move forwards and accept it. First I need to understand it. She was just perfect.’

Sharing the news Lorena had died, Lauren previously told followers she was ‘broken’, as she shared a black and white photo of her holding onto Lorena’s hand.

She wrote on Instagram: ‘She was the most beautiful healthy baby I’ve ever seen just like her sister @babylarose.x … words can’t describe as a mother losing your baby that I carried for all these months perfectly and gave birth too for my angel to be taken from me.’

Lauren went on: ‘She was fine & healthy but I am not going into detail right now just know that there was nothing wrong with her or myself she was perfect I can’t understand …read more

Marcos Alonso missed Chelsea’s 1-0 win over Everton (Shutterstock) Thomas Tuhcel has confirmed that Marcos Alonso has asked to leave Chelsea in order to complete a move to Barcelona. The Spanish club have tried to sign both Alonso and Cesar Azpilicueta this summer, however, the Chelsea captain has opted to stay at Stamford Bridge and […]

Raheem Sterling could play in a number of positions for Chelsea this season (Picture: Getty Images) Raheem Sterling declared his best position as on the wing, but Chelsea boss Thomas Tuchel ‘liked a lot’ what he saw from his new signing in the false nine role against Everton last weekend. Sterling has played as a […]