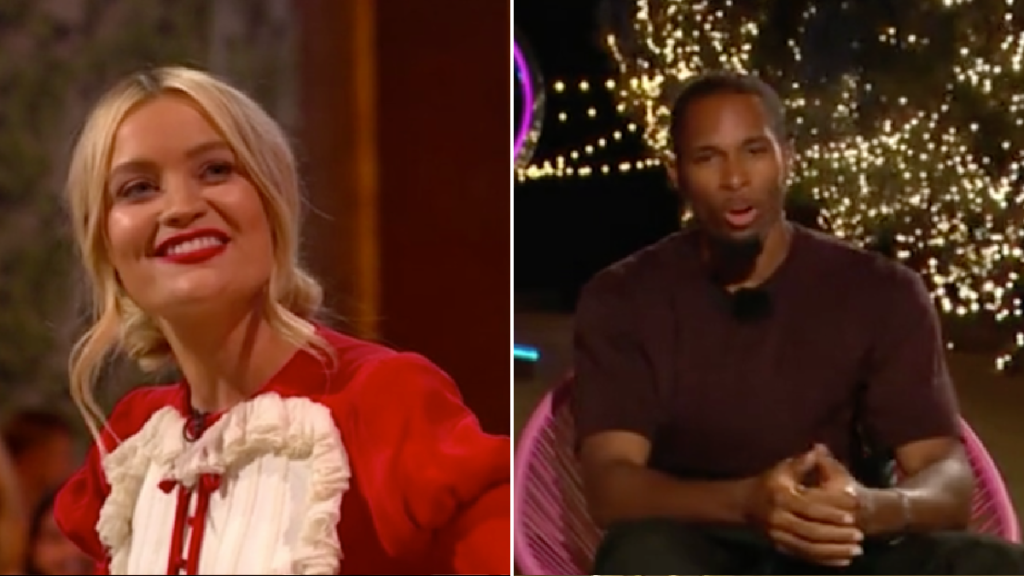 Love Island host Laura Whitmore has defended asking axed islander Remi Lambert to do a farewell rap during his appearance on After Sun on Sunday night.

Remi became the second islander to be eliminated from Love Island after failing to couple up with any of the girls in the second recoupling.

When he entered the villa last week, he immediately showed off his lyrical flow, to the amusement of Luca Bish, and last night he performed again and got quite the reaction from last year’s islanders Chloe Burrows and Toby Aromolaran.

Some viewers, however, said the ‘awkwardness’ was unbearable.

‘Why did they make Remi freestyle on live TV? As if the man hasn’t suffered enough!’ complained one critic, while another tweeted: ‘So rude making Remi do his interview outside the villa front door, not even in his hotel room. No respect.’

One fan even said Remi looked ‘broken’ on After Sun, and said asking him to rap was ‘in bad faith’, adding: ‘I thought [Laura Whitmore] and crew were supposed to “BE KIND”.’

Chill, it was all in good faith guys (Picture: ITV2)

Laura hit back though, and stressed: ‘Remi is a rapper and asked in good faith in advance if he’d rap and prepare something which he did.

‘Live Telly is nerve wrecking, believe me, so maybe he was a bit nervous but he deserved to have his time.’

After Afia Tonkmore became the first islander to get the boot from the villa last week, Laura also teased: ‘Also I want to make Remi & Afia happen!’

We’re here for it too!

Following his exit from the villa, Remi admitted he was ‘a bit disappointed’.

‘I wish I could stay longer to get to know Indiyah and Danica mostly. At the same time, I feel like it was my time to leave. I was getting mixed signals and I wasn’t getting a clear answer from the girls,’ he said.

Full Love Island 2022 line-up
Who has left Love Island so far? All the dumped contestants
Who is Luca Bish’s ex-girlfriend Sophie Floyd?
Which Love Island couples are still together?

Sadio Mane, left, and Mo Salah, right, have played together at Liverpool since 2017 (Photo: Getty) Mohamed Salah has named his dream five-a-side team and has, perhaps controversially, left out Liverpool strike partner Sadio Mane. In an interview with Rio Ferdinand on BT Sport, filmed prior to the Champions League final defeat to Real Madrid […]

They have been named ‘an unlicensed nuisance’ (Picture: AFP via Getty Images) ‘Nuisance’ pedicab drivers in central London have been slammed with record fines amid a council crackdown. Five individuals have been charged a total of £5,682 at City of London Magistrates Court after reports of operators ‘regularly blocking pavements, playing loud music, and charging […]

Consoles may not be any easier to get this Christmas (pic: Microsoft) As the Christmas season inches closer, Xbox’s chief financial officer isn’t optimistic that supply chain issues will be resolved by then. It’s no secret that the games industry has been struggling with supply and demand issues. While the PlayStation 5, Xbox Series X/S, […]