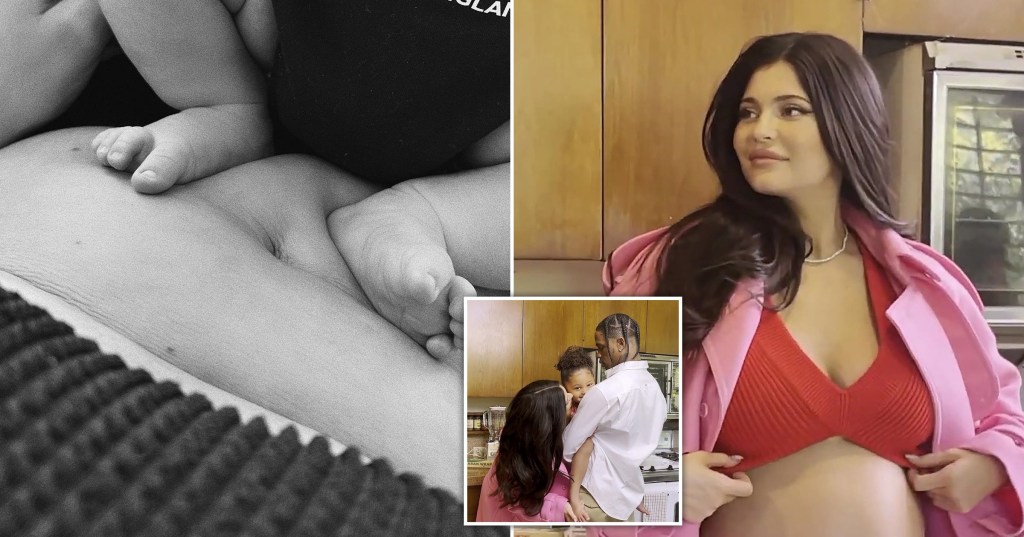 Kylie Jenner has been keeping fans in suspense about her son’s name for nine long months, and while she’s finally confirmed the tot’s moniker, there are still so many questions.

The beauty mogul dropped the bombshell in the season two finale of Hulu’s The Kardashians, which aired on Wednesday night in the US and saw the family prepare for Kourtney Kardashian’s wedding with Travis Barker and Kim Kardashian travel to Paris Fashion Week with daughter North.

However, it also featured Kylie, 25, finally revealing what she and boyfriend Travis Scott have chosen to name their nine-month-old son. Well, kind of.

In a scene filmed several months ago, the Kylie Cosmetics founder confirmed that their baby boy is *still* called Wolf despite announcing they were going to change his name.

Speaking in a confessional, the mum-of-two – who also shares daughter Stormi, four, with Travis – said: ‘This year has been very transformative for me. There’s so many amazing things that I’m really excited about, [to] hang out with my babies and really dive into my work.’

She added: ‘My baby’s name is still Wolf, I’ll let you guys know when I change it. Maybe I’ll tell you guys in season three.’

Kylie and Travis got back together last year following a short split (Picture: Getty Images)

Fans were frustrated with the new teaser and reacted accordingly on social media.

Fed up with the constant mystery, one other stated: ‘Not Kylie teasing us again with the name.’

‘Kylie still teasing that baby’s name! she either gon tell us or take it to the grave at this point!’ one fan joked.

The reality star welcomed ‘Wolf’ on February 2, just one day after his big sister Stormi celebrated her birthday.

Kylie isn’t the only one in the family keeping secrets as her older sister, Khloe Kardashian, is also yet to reveal her baby boy’s name, despite welcoming him via surrogate in July.

The Kardashians is available to stream on Disney+.

MORE : Liam Gallagher is absolutely fuming Matt Hancock is still in the I’m A Celebrity jungle after Babatunde Aléshé’s exit

MORE : Davide Sanclimenti and Ekin-Su Cülcüloğlu give the fans exactly what they want as they ooze romance in new series Homecomings

When is the Remembrance Sunday ceremony and how to watch live?

This will be the first Remembrance Sunday with Charles as sovereign (Picture: Max Mumby/Indigo/Getty Images) The nation observed a moment of silence earlier this week, in honour of Remembrance Day. Also known as Armistice Day, we fall silent on the eleventh hour of the eleventh day of the eleventh month, to remember the time peace […]

Anya Taylor-Joy teases Mad Max spin-off Furiosa is ‘the dirtiest, bloodiest I have ever been’

The actor has got down and dirty for the role (Picture: Nina Westervelt / Variety via Getty Images) Mad Max fans will be delighted to hear that while starring in the upcoming prequel Furiosa, Anya Taylor-Joy was ‘the dirtiest’ and ‘bloodiest’ she had ever been. Production just wrapped on the film, directed by George Miller, […]

A slice of this old cake will be selling for around £600 at auction next week (Picture: Julien’s Auctions/REX/Shutterstock) Would you eat a slice of 17-year-old cake? We wouldn’t, but fans of the Royal Family could feast on a bit of fruit cake from the wedding of King Charles and Camilla, the Queen Consort, which […]