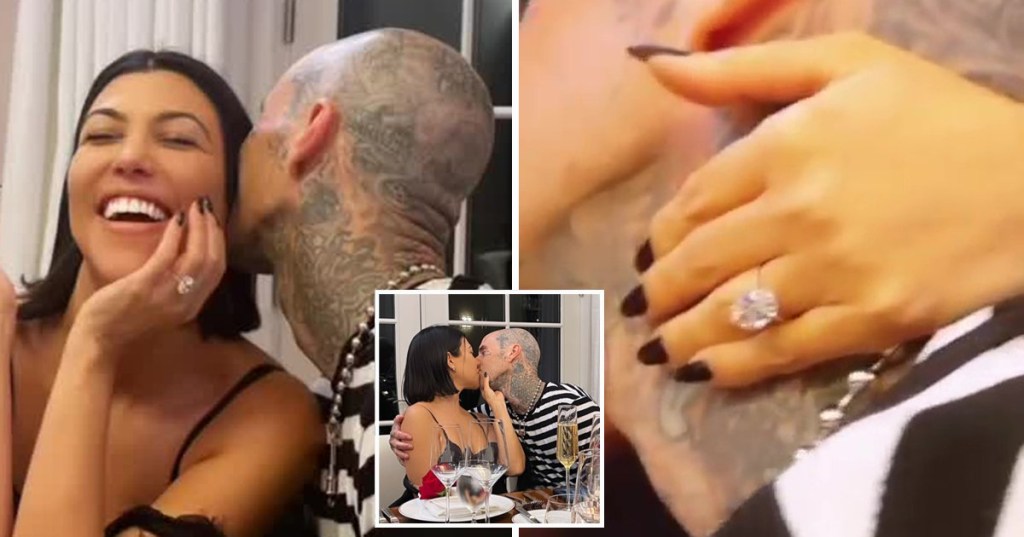 Kourtney Kardashian and Travis Barker’s engagement has played out on the Kardashians (Picture: Instagram)

Kourtney Kardashian had a very awkward moment following her engagement to Travis Barker – when she broke her whopper of a diamond ring.

The mom-of-three took the next step with the Blink-182 rocker last year, in scenes that have finally aired on The Kardashians.

While they have barely taken a break from all their PDA since the romantic day, it turns out the reality star had a ‘nervous breakdown’ in the days since the proposal.

Speaking to Kris Jenner in the most recent episode, the momager questioned where her missing ring was, leading Kourtney to come clean.

‘I’m covering it because it’s actually getting fixed,’ she said, delving into the story. ‘This is probably one of the worst things I’ve ever done in my whole life.

‘I was sitting on my floor folding sweatshirts, and I took the ring off and I put it next to me on the floor, thinking it would be safe right next to me.

Kourtney praised Travis for how well he dealt with the situation (Picture: Getty)

‘I had to get something up above in my closet and when I stepped down, I stepped on the ring.’

Clearly baffled by the news, Kris clarified: ‘You broke your engagement ring?’

‘I was hysterically crying in my closet for hours,’ she continued before confirming that Travis came to the rescue.

‘He handled it the best, but it really gave me a nervous breakdown.

‘This is the most beautiful thing I’ve ever had in my life. How could I have done that?’

She added to the camera: ‘Travis picked it out, he designed it and it was, like, me in a stone. So I thought that was really special.’

Maybe don’t leave it on the floor next time…

It was an awkward episode all around as Kourtney and Travis accidentally got hot and heavy with their trademark PDA, as her ex Scott Disick watched on.

The former couple dated on-and-off for around nine years, and share children Mason, Penelope and Reign together before calling time on their romance in 2015.

The businessman has kept a low profile on the series so far, as his ex’s new romance took center stage, but he eventually landed an invite to Kris’ birthday dinner, where he took a moment to congratulate the couple on their happy news.

Shortly after, Kravis couldn’t help sharing a kiss before sitting down to eat, seemingly unaware that everyone else in the room could see them.

‘Scott’s right there,’ the family matriarch stage-whispered as the table watched on. ‘Oh, this couldn’t …read more

Store shelves across the US have seen a shortage of baby formula (Picture: Getty Images) The baby formula shortage across the US should begin to ease ‘within days’, according to a top US regulator. Parents struggling to find formula ‘should begin to see improvement’ in stores, Food and Drug Administration (FDA) Commissioner Robert Califf told US […]

Harry and Meghan got married just under two years after they met on a blind date in 2016 (Picture: Getty) Prince Harry and Meghan Markle said ‘I do’ exactly four years ago today. The couple married to huge fanfare at St George’s Chapel in Windsor Castle on May 19, 2018. A staggering 18 million people […]