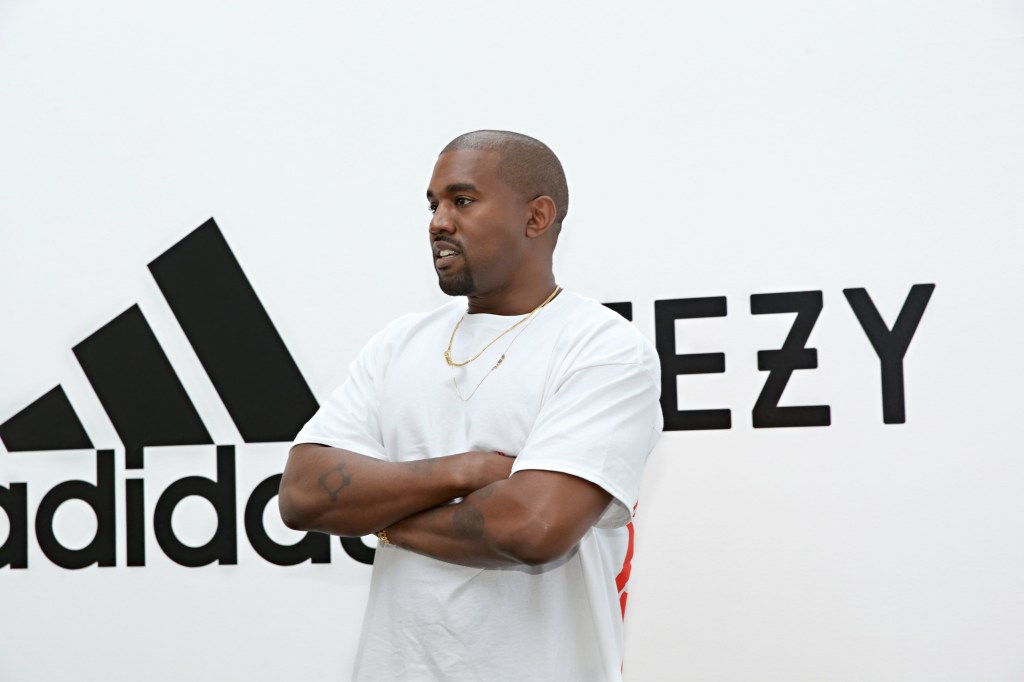 Kanye West wouldn’t be too impressed if he saw his ex-wife modelling his rival brand (Picture: Getty Images for ADIDAS)

Kim Kardashian has risked the wrath of her ex-husband Kanye West by wearing Adidas, the brand who sensationally cut ties with him ending their billion-dollar partnership a matter of weeks ago.

The Kardashians star updated her Instagram feed with yet another selfie but this time, instead of modelling a set from her own Skims brand, Kim was kitted out in pieces from the sportswear giant.

In the snap, the 42-year-old is seen posing on a sofa in the large dressing room of her sprawling Calabasas mansion, with a clothing rail behind her.

Perched on the edge, Kim takes a selfie in the mirror wearing a silver long-sleeved Adidas top boasting a turtle neck, and a pair of shorts with the brand. Of course, because she said sporty but make it fashion, the reality star finished off the look with a pair of thigh-high oversized boots – think Julia Roberts in Pretty Woman.

‘Hey,’ she simply captioned the photo but the interesting choice of clothing brand did not escape her followers, who accused her of dissing her former husband who was dropped from Adidas last month.

One commented: ‘The shade is unreal.’

Kim was kitted out in full Adidas – and boots that might not be made for walking (Picture: @kimkardashian, Instagram)

Kim was accused of being ‘shady’ and ‘petty’ by her followers for the outfit choice (Picture: Getty Images)

‘Adidas? Really?’ another questioned, while another follower stated: ‘Lately you’ve been dressing for revenge.’

One fan laughed: ‘Kimmy why you being petty.’

Another joined in: ‘Adidas when your baby daddy is in war with them… interesting choice. Like boots with workout clothing.’

In October, Adidas ended its nine-year relationship with Kanye, 45, and his Yeezy brand after he made allegedly anti-semitic comments and wore a White Lives Matter shirt at his fashion show.

Kim filed for divorce from Kanye in February after six years of marriage (Picture: Getty Images)

The brand said in a statement at the time: ‘Adidas does not tolerate antisemitism and any other sort of hate speech. Ye’s recent comments and actions have been unacceptable, hateful and dangerous, and they violate the company’s values of diversity and inclusion, mutual respect and fairness.

‘After a thorough review, the company has taken the decision to terminate the partnership with Ye immediately, end production of Yeezy branded products and stop all payments to Ye and his companies. Adidas will stop the Adidas Yeezy business with immediate effect.

‘This is expected to have a short-term negative impact of up to €250 million (£217m) on the company’s net income in 2022 given the high seasonality of the fourth quarter.

‘Adidas is the sole owner of all design rights to existing products as well as previous and new colorways under the partnership. …read more

Banksy mural in Ukraine prized off the wall by thieves

Thieves managed to get the graffiti off a wall but were caught at the scene (Picture: Reuters) A group of people managed to prize a Banksy mural off a wall in Ukraine. Several works by the cult graffiti artist popped up on the walls of buildings damaged by fighting in November. His pieces can sell […]

Jason Lee has addressed David Baddiel’s blackface apology (Picture: Instagram) Jason Lee has shared his upset over his late mother not being here to have heard David Baddiel’s apology for his racist blackface impersonation. Comedian and writer Baddiel ridiculed the footballer on his BBC sketch show Fantasy Football League in the 90s, which he fronted alongside Frank […]

Gorillaz gear up to host a live masterclass with Smirnoff Virtual sensation Gorillaz’s frontman Murdoc Niccals has let slip the band’s green room must-haves as well as his dream dead drinking buddy. When it comes to tour riders, the sky’s the limit and English alternative rock band Gorillaz were intent on testing just how far […]