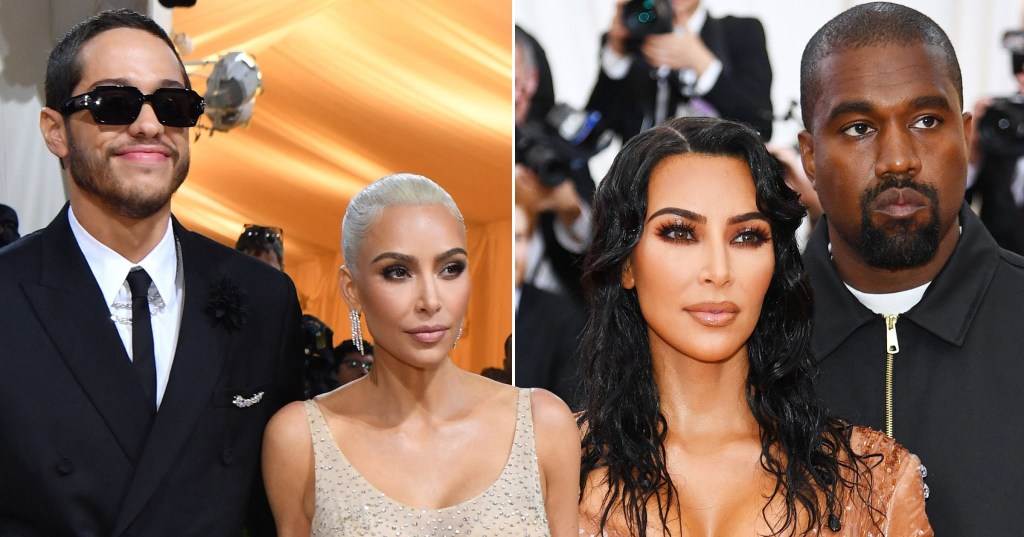 It’s been claimed that Kim Kardashian’s split with Pete Davidson was because she felt ‘totally exhausted’ by their relationship, as well as other aspects in her busy life.

The reality star and entrepreneur, who recently launched a new skincare line, separated from her boyfriend of nine months this week after a headline-grabbing courtship.

Pete, 28, and Kim, 41, originally hit it off following her guest host stint on Saturday Night Live last October, with the mother-of-four asking a producer for his phone number when the comedian skipped her after-party.

An insider has now claimed that their age difference and separate demands on her time caused their split.

‘Pete is 28 and Kim is 41 – they are just in very different places at the moment,’ the source told Page Six.

‘Pete is totally spontaneous and impulsive and wants her to fly to New York, or wherever he is on a moment’s notice. But Kim has four kids and it isn’t that easy. She needs to focus on the kids.’

The stars are 13 years apart in age (Picture: Instagram/Kim Kardashian)

The insider also said that Kim, who is onto the second season of her family’s hit TV show The Kardashians, pursuing a legal career and running her popular shapewear brand SKIMS, is ‘totally exhausted by this relationship and other things going on in her life.’

However, Kim is not getting back together with Kanye West another source has insisted, quashing rumours of a reunion with her former husband.

The 41-year-old reality star filed for divorce from rapper Kanye, 45, in 2021, and shares kids North, nine, Saint, six, Chicago, four, and three-year-old Psalm with him.

Insiders have squashed claims that a reunion is on the cards for Kim and Kanye (Picture: Getty)

During her relationship with Pete, Kanye’s erratic behaviour caused problems for the couple, leading to a tumultuous relationship between him and Kim.

Things are now reportedly calmer – but there’s no hint of a romantic reconciliation.

A source told E! News: ‘The divorce is still moving forward. They are happily co-parenting.’

A second insider went on to claim to the publication that The Kardashians star is in a ‘really great place’ with her ex-husband – but alleged that although she participated in recent promotion for his Yeezy fashion line with Adidas, it was ‘not a sign of them getting back together’.

‘They are fully aligned in making their kids their priority,’ they added.

The claims come just one day after it was reported on Friday that the SKIMS founder, who was declared legally single back …read more

…read more Source:: Metro        (Visited 6 times, 1 visits today)Coleen Rooney ‘confident’ ahead of Rebekah Vardy libel trial verdict in Wagatha Christie battle Coleen Rooney is apparently feeling confident ahead of today’s decision (Picture: Reuters) It’s the day many, many of you have been waiting for when the…Coleen Rooney ‘pleased’ to have won Wagatha […]

Giovani Lo Celso spent the second-half of last season on loan at Villarreal from Spurs (Photo: Getty) Tottenham are reportedly aiming to sell both Giovani Lo Celso and Tanguy Ndombele to Villarreal before the summer transfer window closes. According to Fabrizio Romano, the two clubs are close to a deal for Lo Celso, who spent […]

Your daily horoscope for Tuesday, August 9, 2022

Cancer, compromise is not the only way to tackle a difficult situation (Picture: Getty/Metro.co.uk) Today seems like a Mexican stand-off as it’s all about relationships and it may well be high noon for some of us. Feelings seem heightened, emotions are running a tad steamy, demands may be unacceptable and caution may be the watchword […]