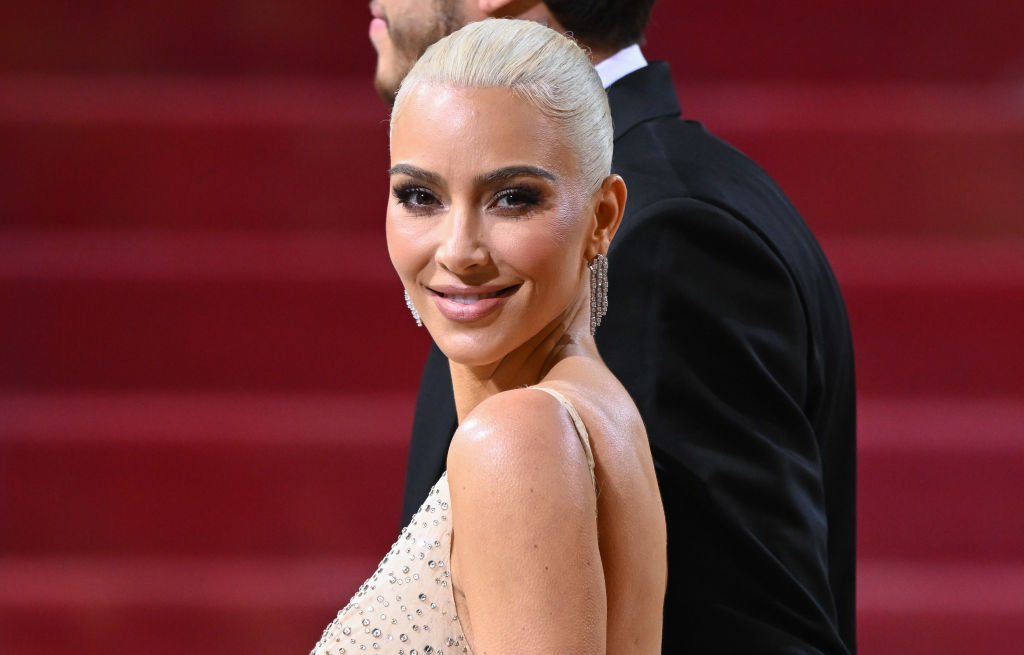 Kim Kardashian was pictured out with her two sons in Manhattan (Pcture: James Devaney/GC Images)

Kim Kardashian was pictured out with her two sons in Manhattan (Pcture: James Devaney/GC Images)

Kim Kardashian was spotted out in New York in a red hot (literally) outfit on Monday with kids Psalm and Saint in New York, after an awkward reunion with ex Kanye West.

The former couple came together on Friday to watch their eldest child, daughter North, nine, in a basketball match near Thousand Oaks, California, but kept distance between them as they sat on separate parts of the bleachers.

This week, Kim was wrangling two of her four kids with Kanye – sons Saint, six, and three-year-old Psalm – as they exited the car to make their way into a Manhattan hotel.

Skims entrepreneur Kim kept her cool in a sleek red Balenciaga co-ordinated outfit of leggings and a matching zip-up top as she held Psalm in one arm and coaxed Saint along with her free hand.

She also expertly managed a silver handbag in a few spare fingers as she ushered her children inside.

Although Saint didn’t look entirely happy with events, he followed his mum as she guided him in under one arm.

Mum Kim was with sons Saint and Psalm (Picture: PapCulture/Backgrid)

She reassured son Saint, who didn’t seem to be loving life at that exact moment (Picture: PapCulture/Backgrid)

Kim expertly handled her kids while security helped with an escort (Picture: PapCulture/Backgrid)

According to TMZ on Friday, estranged couple Kim and Kanye ‘spoke from time to time throughout the evening and appeared cordial’ during North’s game.

They are also parents together to daughter Chicago, four.

Kanye and Kim, who were married for six years, were declared legally single on March 2 and their divorce is expected to be finalised in August.

However, just a couple days after the game, Kim took to Instagram to wish Ye a Happy Father’s Day.

The billionaire businesswoman and reality star shared a snap of Kanye, North, Saint, Chicago and Psalm, all together, to her Instagram Stories.

Kim praised Kanye for being ‘the best dad to our babies’ on Father’s Day (Picture: Instagram/kimkardashian)

She captioned the image: ‘Thank you for being the best dad to our babies and loving them the way you do! Happy Father’s Day Ye!’

Kim also posted a picture of the Yeezy founder with seven-year-old nephew Reign Disick on his shoulders while embracing North and Saint.

If you’ve got a celebrity story, video or pictures get in touch with the Metro.co.uk entertainment team by emailing us celebtips@metro.co.uk, calling 020 3615 2145 or by visiting our Submit Stuff page – we’d love to hear …read more

(Picture: Fremantle) Paul Robinson (Stefan Dennis) has been playing dirty throughout their divorce proceedings in Neighbours, but is Terese (Rebekah Elmaloglou) about to have her day? Paul slips up and Terese pounces, leading to what could be a super sweet conclusion for her. Terese finds out that Sapiko & Bazz holdings has gone bust and […]

Lorraine reveals she does actually have history with Boris Johnson despite his almighty snub: ‘Clearly I didn’t make much on an impression’

Mr Johnson is always welcome on Lorraine’s show (Picture: EPA/REX) Lorraine Kelly has insisted Boris Johnson is welcome to appear on her chat show ‘whenever he likes’ after the Prime Minister let slip he had no idea who she was. Kelly is the epitome of a TV legend. She’s quite literally been the most comforting […]