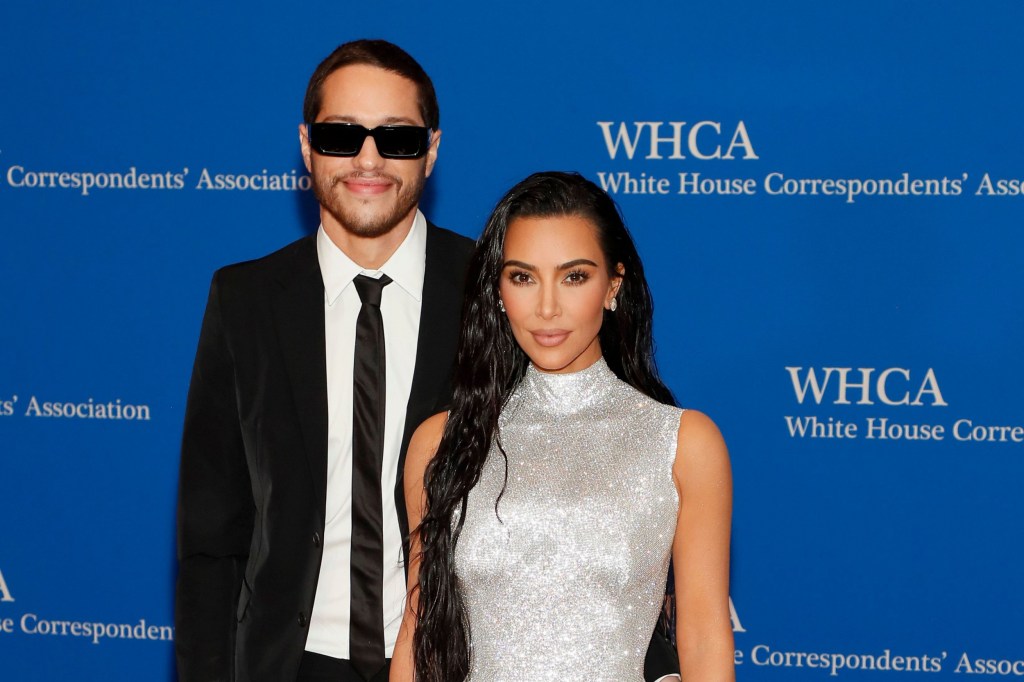 Kim Kardashian is seemingly not fussed at all by the news her ex Pete Davidson has moved on with younger model Emily Ratajkowski.

The 42-year-old star parted ways with the comedian, 29, earlier this year and is said to be unfazed by his new blossoming relationship with the 31-year-old.

Appearing to confirm the rumours, Pete and Emily were caught on camera sharing an intimate hug as the pair celebrated the SNL star’s birthday in matching outfits.

Snapped in New York City, Emily was seen to be the latest addition to the popular romancer’s long list of famous girlfriends, which already includes Ariana Grande, Kate Beckinsale, Phoebe Dynevor and the queen of the Kardashians herself.

A source close to the Skims founder shared: ‘Kim is not bothered by Pete and Emily’s relationship and knows that things were over between her and Pete.

‘She just wants everyone to live their best lives and be happy.’

Emily was spotted visiting the comedian on his 29th birthday in New York (Picture: T.JACKSON / BACKGRID)

The business mogul and model was said to be ‘trying to focus on herself and her kids’ happiness,’ they added to Entertainment Tonight.

Mother to North, nine, Saint, six, Chicago, four and Psalm, three, who she shares with ex Kanye West, Kim is ‘continuing to do her best’ when it comes to navigating co-parenting.

The infamous couple called it quits amid Kanye’s mental health struggles in February 2021. They had been married for six years before the Kardashian filed for divorce.

The insider added: ‘She has been leaning on her very regimented and balanced work schedule, diet and fitness regimen, family routine and more.

‘Her family acts as her rock and she loves engaging in anything and everything family related.

The couple dated for nine months before calling it quits (Picture: NBC)

The funnyman has dated a string of Hollywood’s most beautiful women (Picture: Jamie McCarthy/Getty Images)

‘Her kids are doing super well and feel taken care of across the board.’

Meanwhile, another source on the other side of the equation recently revealed that Emily ‘is super into’ Pete.

After joining the star for his recent birthday celebrations, people close to the pair shared there had been ‘non-stop communication’ between the celebrity duo over recent weeks.

The source explained to E! News: ‘Emily is super into Pete right now.

‘It’s still very new, but they have been in non-stop communication and she just went out with him to celebrate his birthday and wanted to make him feel special.’

Continuing on, they spilled: ‘It’s a chill relationship so far.

‘There’s no pressure to make it exclusive, but she really likes him.

‘Pete is charming and winning her over for sure.’

The French coach had until Monday evening to call up a replacement (Pictures: Telefoot / Getty) France boss Didier Deschamps has raised a few eyebrows after confirming that he will not be calling up a replacement following Karim Benzema’s injury on the eve of the World Cup. The Ballon d’Or winner had been a doubt […]

Janine suffered a partial placenta abruption (Pictures: BBC) Janine Butcher (Charlie Brooks) and Mick Carter (Danny Dyer) learnt some upsetting news about their baby during tonight’s EastEnders. Janine ended up in hospital because of the fall she suffered in the train station. Luckily, Linda (Kellie Bright) was around when she spotted the ambulance, so she […]

Five victims of the Walmart shooting have been pictured and the sixth was a 16-year-old-boy (Pictures: AP) Six people who were shot dead at a Walmart have all been identified as workers at the store, including a 16-year-old boy. The city of Chesapeake, Virginia, where a gunman opened fire in a Walmart where he worked […]