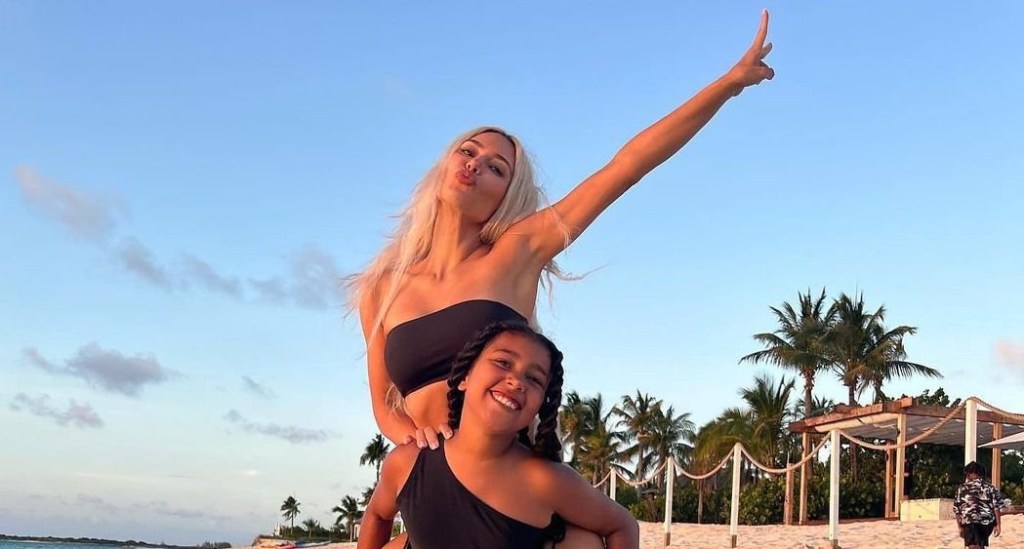 Kim had an awkward chat with her nine-year-old (Picture: @KimKardashian/Instagram)

The awkward conversation that North West was probably dreading (as were the rest of us) has finally happened, as Kim Kardashian told her eldest daughter about the night of her conception.

The mum-of-four who shares North, Saint, Chicago and Psalm with ex Kanye West, opened up during a trip to Paris for fashion week.

The mother-daughter duo visited Oliver Rousteing in Paris, which prompted Kim to explain how the designer had a part to play in North’s conception.

Speaking in the latest episode of The Kardashians, Kim explained to her nine-year-old: ‘Northie, I’ve known Olivier since before you were a baby.

‘And he gave daddy this blue dress that daddy wanted for me.

‘It was my birthday the year before you were born and I wore the dress, and I got pregnant and you got in my belly the night I wore that dress.

‘So, Olivier might have a little something to do with the reason you’re on this planet.’

North was too busy enjoying her french fries to offer any reply, as the clip cut to a picture of Kanye and Kim from that night in October 2012.

Around that time, Kim and the rest of her famous family were still filming Keeping Up With The Kardashians, and while North hasn’t watched the show, despite being surrounded by it for her entire life, Kim previously revealed that her daughter does mock moments of the show through clips she’s seen on TikTok.

One viral moment in fact, when the family took a trip to Bora Bora and Kim burst into tears over losing a diamond earring in the water, prompting her older sister Kourtney Kardashian to say the memorable line: ‘Kim, there’s people that are dying.’

‘She sees it’s a popular TikTok where they do the crying scene from Bora Bora. Pretty much all my crying scenes,’ Kim said last year, while filming the final season of Keeping Up With The Kardashians.

‘So she sees that stuff and she’ll come in and go, “Mum, I lost my earring,” and she’ll like do that as a joke and I’m just like, “You have no idea what that is.”

Scott Disick, who has three children with Kourtney, questioned when the best time would be to introduce KUWTK to the younger generation of the family.

‘I’m just thinking they’re going to watch it at some point because it’s like, our life,’ he said.

‘At what point do we sit them down and say, “You’re allowed to either go through these seasons and see what mum and dad did all these years”.’

Cubik Partners insisted staff should go on pub trips after work (Picture: Getty Images/iStockphoto) A Frenchman has won the right to be boring at work after he was fired for not going out enough with colleagues. Management consultancy group Cubik Partners insists it uses a ‘fun’ approach to its team building, which mainly involves pushing […]

Welcome to Britain’s least used railway station (Picture: PA) If you ever find yourself at Elton and Orston railway station, you are most likely on your larry. Nestled between its two namesake villages in rural Nottinghamshire, a grand total of 40 people used it over 12 months. It is served by just two trains every […]

Cody Gakpo scored his second goal of the tournament in Holland’s 1-1 draw against Ecuador (Picture: Getty) PSV will up their asking price for Cody Gakpo after the World Cup but fear their star forward will depart in the January transfer window after starring in Qatar. The 23-year-old has scored 15 goals in 26 appearances […]