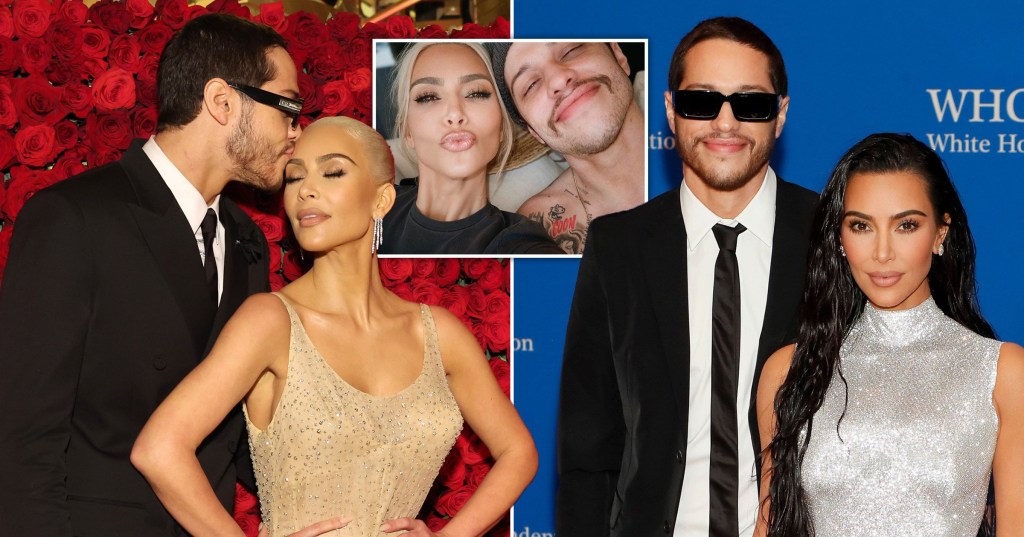 Kim Kardashian’s whirlwind romance with Pete Davidson appears to have ended as quick as it started as the pair have split after nine months.

The couple, who met when Kim hosted Saturday Night Live have reportedly blamed the long distance aspect of their relationship for their break-up.

Kim, 41, and Pete, 28, had initially sparked romance rumours after sharing a kiss during a sketch, later confirming their relationship on Instagram.

Despite several loved-up appearances and Pete making his debut on The Kardashians, the family’s reality TV show, plus a few tattoo tributes, the couple decided to part ways.

Here’s a look back at their romance:

Kim and Pete’s first kiss was caught on camera and broadcast live to the world during her appearance on Saturday Night Live.

The couple first met and got to know each other when Kim was the celebrity guest host of the comedy sketch show, with the pair hitting it off.

One of the sketches they appeared in together saw them dressed as Jasmine and Aladdin from the Disney film, before they locked lips while in character.

Kim and Pete were spotted holding hands during an outing to Knott’s Scary Farm in California for Halloween.

The couple enjoyed the rides together and were joined by sister Kourtney Kardashian and her then-fiancé, Travis Barker.

Kim had flown to New York for business but made sure to carve out time to visit Pete in Staten Island and enjoy a secret dinner together.

Pete had arranged for them to eat at Campania where they enjoyed a private dinner together on the rooftop.

November 16, 2021 – Pete and Kim wear matching pyjamas in first Instagram snap together for his birthday

Pete and Kim made their Instagram debut on Flava Flav’s feed wearing matching pyjamas as they spent his birthday weekend together.

The comedian was seen wearing the top half of the Skims plaid pyjama set while Kim wore the bottoms, and her mother Kris Jenner rocked the same set as they posed with the musician.

December 19-21, 2021 – Kim and Pete enjoy cinema date, spend night together at hotel and then grab breakfast

Kim and Pete were spotted heading to the cinema with Scott Disick and a female companion while the stars were in New York.

Pete was said to have stayed over at Kim’s hotel before being photographed looking giddy in the morning, with the couple then enjoying a breakfast date together in Los Angeles.

The couple had been sharing loved-up snaps (Picture: INSTAGRAM/@kimkardashian)

January 6, 2022 – The happy couple enjoy their first sunny vacation together

Kim and Pete jetted off to the Bahamas together in January where they enjoyed some one-on-one time in the idyllic location.

Coleen Rooney and Rylan Clark partied with Westlife days after the star won her case against Rebekah Vardy (Picture: Instagram) Coleen Rooney has clearly put the Wagatha Christie legal debacle behind her as she danced the night away with Rylan Clark. The TV personality, who is married to footballer Wayne Rooney, had been embroiled in […]

Asking For A Friend: How do I tell my child I can’t afford what they want?

It’s important to stay neutral (Picture: Getty Images/Metro.co.uk) I’ll always remember rifling through a copy of the Argos catalogue as a child, optimistically circling the items I wanted to find under the tree at Christmas. Looking back, I can’t remember if I knew deep down that I wouldn’t be getting the majority of those items, […]