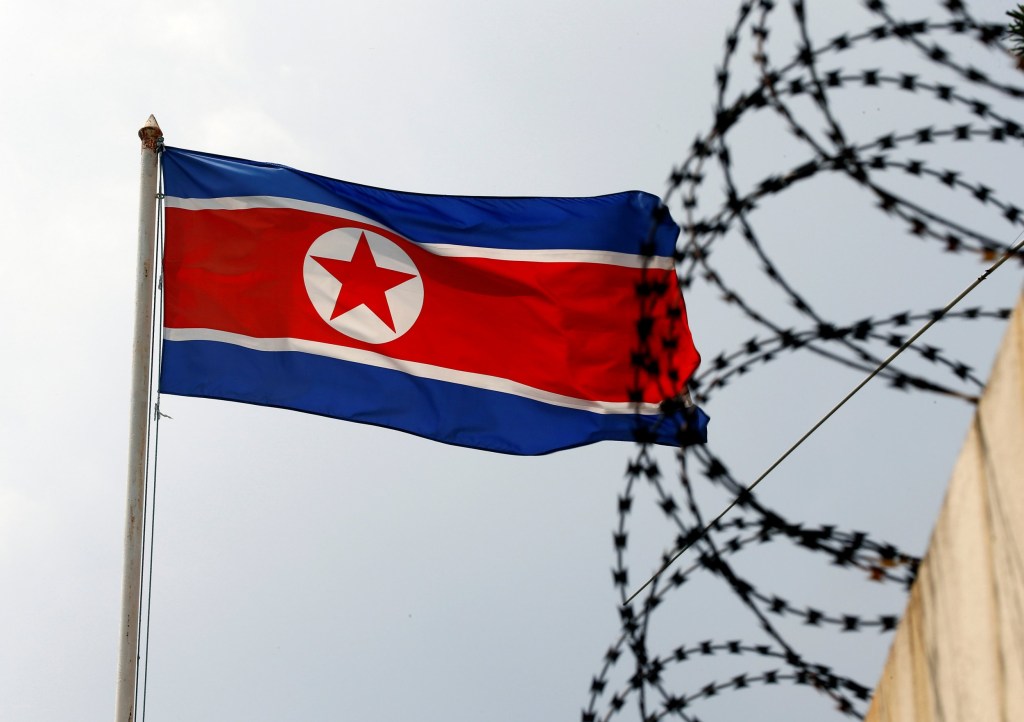 People have been ordered to stay at home for five days to prevent the spread (Picture: Reuters)

Pyongyang has been locked down following the rapid spread of an ‘unspecified’ respiratory illness.

North Korean authorities have not confirmed whether the situation is related to Covid-19 cases.

The five-day lockdown will see people in the city contained to their homes and ordered to take their temperatures.

Seoul-based NK News and the Russian embassy both reported the lockdown today, citing a notice issued by Kim Jong-un’s Government.

The notice states that ‘a special anti-epidemic period has been established’ as it called on foreign delegations to keep employees inside.

It also called for individuals to measure their temperatures four times a day and report the results to a hospital by phone.

The notice made no mention of Covid-19.

However, it did cite an ‘increase in winter cases of recurrent flu and other respiratory diseases’.

The lockdowns were first reported by South Korea’s NK News, which monitors the secretive North Korea from afar.

On Tuesday, the website reported that Pyongyang residents appeared to be stocking up on goods in anticipation of stricter measures. It was unclear if other areas of the country had imposed new lockdowns.

Covid-19 cases started springing up in North Korea in May, after Kim Jong-un claimed the country had been coronavirus-free for the previous two years.

At the time, the majority of the nation was unvaccinated and the country severely lacked testing kits.

Figures on the number of Covid cases in North Korea are unclear due to poor recording (Picture: AP)

In July, North Korea suggested the Covid outbreak was caused by people who came into contact with balloons flown from South Korea.

By August had declared victory over the virus.

True case numbers were never confirmed by authorities, so the true impact of the pandemic on the country has not been revealed.

Pyongyang had simply reported daily numbers of patients with fever, a tally that rose to some 4.77 million, out of a population of about 25 million.

But it has not reported such cases since July 29.

State media have continued to report on anti-pandemic measures to battle respiratory diseases, including the flu, but have yet to report on the lockdown order.

On Tuesday, state news agency KCNA said the city of Kaesong, near the border with South Korea, had intensified public communication campaigns ‘so that all the working people observe anti-epidemic regulations voluntarily in their work and life’.

Man 91, charged with murdering his wife, 92, after she was found dead at home

BBC chairman ‘helped secure loan worth up to £800,000 for Boris Johnson’

Labour has called for a probe into the Conservative Party’s ‘quagmire of sleaze’ (Picture: Bloomberg/Getty) A BBC chairman reportedly helped Boris Johnson arrange a guarantee on a loan – of up to £800,000 – just weeks before he was recommended for the job by the then-prime minister. Labour is calling for an investigation into ‘a […]

Jacob Rees-Mogg is taking a leap into the world of media (Picture: Shutterstock) Jacob Rees-Mogg is getting his own show on GB News after playing a prominent role in two failed governments. The Tory MP, known for his loyal support of Boris Johnson, double-breasted suits and falling asleep in the Commons, will join the likes […]