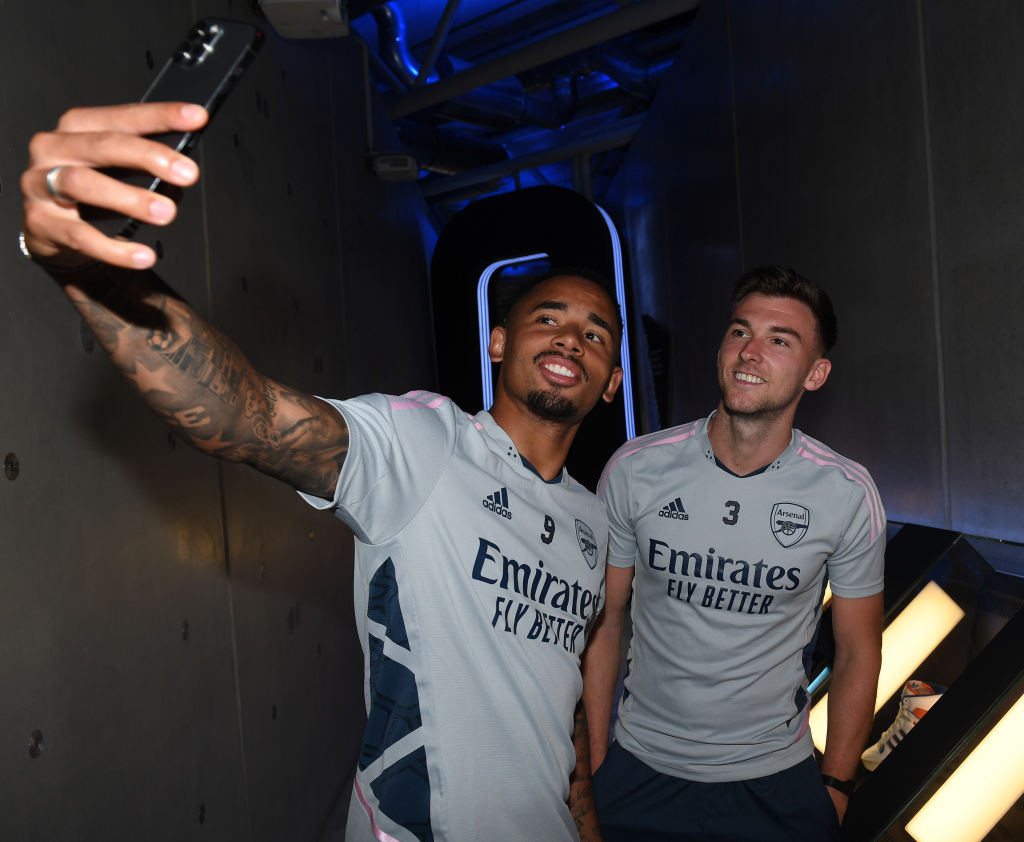 Arsenal defender Kieran Tierney has revealed the first thing he said to Gabriel Jesus upon meeting the forward after the club had signed him.

Jesus joined the Gunners from Manchester City in the summer for £45million and has been heralded as one of the biggest signings in the club’s recent history, especially after his brilliant performances during pre-season.

Many of his new Arsenal teammates have already expressed their delight at having the Brazilian on their side now and Tierney is no exception, believing that Jesus and the other summer signings will help the club achieve great things in the upcoming campaign.

In an interview with Chris Sutton for the MailOnline, the 25-year-old left-back was asked what a perfect season would look like: ‘Personally, staying fit, getting a run of games, finding form.

‘Collectively, getting into the Champions League and winning a trophy.

‘The signings have been amazing, like Gabriel Jesus from Manchester City. The first thing I said to him was, “I hated playing against you!”.

‘So I’m buzzing he’s on our team now. There is a feeling in the camp, a different hunger, a different desire.

‘Even the 6-0 win over Sevilla on Saturday. It’s a pre-season friendly but you can only beat what’s in front of you. We’ve got enough to be optimistic this season.’

Arsenal have also signed another player from City this summer in the form of the versatile Oleksandr Zinchenko, who can play in midfield but will more than likely be used in rotation with Tierney, as while the Scotland international has played very well since his move to the Emirates in 2019, he has also struggled a lot with injuries.

But this hasn’t worried Tierney at all, and he even revealed that manager Mikel Arteta had not informed hm about the transfer.

He added: ‘But I’m not surprised because I’ve never had that. At a club like Arsenal, you need competition.

‘For where we want to go, you need at least two players for each position. He is a great signing.

‘Genuinely, I love it [competition]. I love being up against it. I’m coming back from injury. I know I’ll need to work my way back. But I’m ready.’

Emotional scenes ahead (Picture: ITV) Prepare for absolutely heartbreaking scenes in Emmerdale, as Charity (Emma Atkins) and Mackenzie (Lawrence Robb) are set to lose their baby in upcoming episodes. After Charity initially considered having an abortion, once she shared the news of her pregnancy with Mackenzie it was clear his reaction was very different to […]

Shakira all smiles landing in Miami with sons Sasha and Milan after prosecutors called for star to serve eight-year prison sentence over €23,000,000 ‘tax fraud’

Shakira landed in the sunshine state this week (Picture: Mega) Shakira seemed carefree and relaxed as she touched down in Miami this week despite her facing serious legal issues regarding her taxes.  The Hips Don’t Lie singer was spotted arriving at Miami airport accompanied by her two sons Milan, nine, and Sasha, seven, who she […]