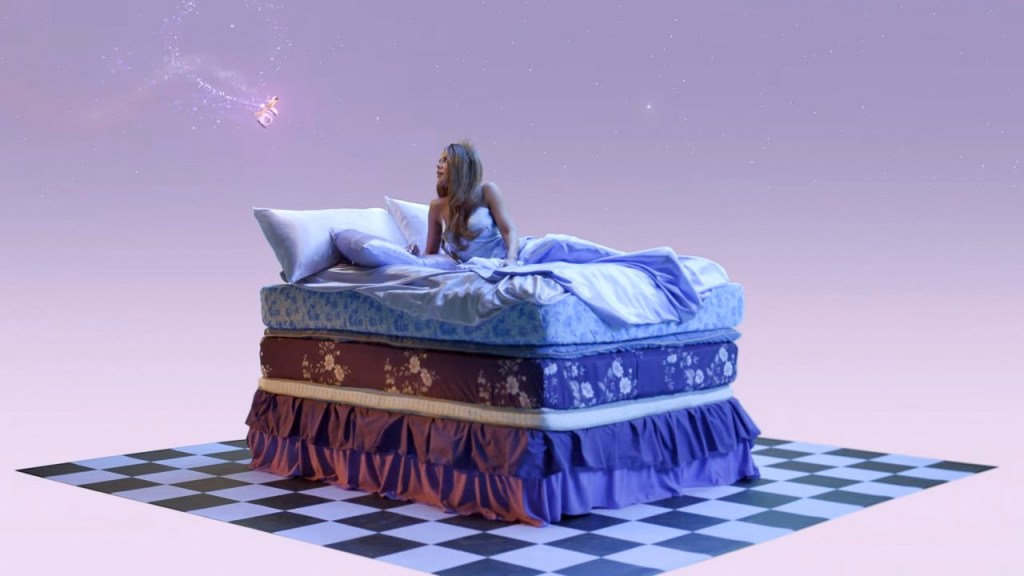 Khloe Kardashian proved to be a supportive sister as she helped star in Kourtney’s princess inspired Lemme campaign.

In the 30-second clip shared on Instagram, the Revenge Body host is seen lying on a bed looking lush in lavender with a tiara propped on he head

Staying true to the Disney-esque theme, a narrator was heard saying: ‘Once upon a time in medieval Calabasas, there lived a beautiful princess named Khloe, who was cursed with a lifetime of sleeplessness.’

Goop founder Kourtney later flies to Khloe’s rescue and gives her a batch of her own vitamin gummy supplements.

‘At long last, Khloe slept like never before and live happily ever after.’

A modern take on Princess and the pea: Lemme/YouTube

Safe to say that fans were living for Khloe and Kourtney’s convincing performance, with one writing on Instagram: ‘We know kourtney flying is gonna become an iconic meme.’

‘I love this ❤️❤️ whoever thought of this needs a raise,’ one commented.

Speaking to Interview Magazine, Kourtney – who is married to Blink-182 drummer Travis Barker – said: ‘If it’s just me and him [Barker], then it’s a little nothing or boxers and no shirt. I don’t know. I switch it up. I always got to keep it interesting.’

Musician Travis is currently sporting a medical boot after breaking his toe earlier in the week.

The 47-year-old shared his X-ray on Instagram showing a break to one of the bones in his left foot.

Captioning it ‘broke my toe’, Travis also shared a later photo of him having a medical boot fitted onto his foot by a medic to help with his healing.

MORE : Julia Fox says she only dated Kanye West ‘to get him off Kim Kardashian’s case’ and insists he was ‘being normal around me’

You can follow our new Snapchat show Pop Cultur’d, the go-to place for …read more

Paul Hollywood ‘engaged to Melissa Spalding’ after three years together

You have until November 28 to take advantage of these offers (pic: Sony) For the next week and a half, you can get major PS5 exclusives like The Last Of Us Part 1 and Horizon Forbidden West for up to half price. There were already rumblings of Sony offering discounts on its PlayStation Plus service […]

Drugs queenpin, 25, caught running entire operation on her own

Henna Ashraf operated alone, heading a county lines drug operation (Picture: West Mids Police/SWNS) A drug dealer who flaunted her wealth on Snapchat, including a £500 haircut at a swanky London salon, has been jailed. Henna Ashraf posted pictures of her Mercedes and of stacks of cash on the social media app. The 25-year-old made […]