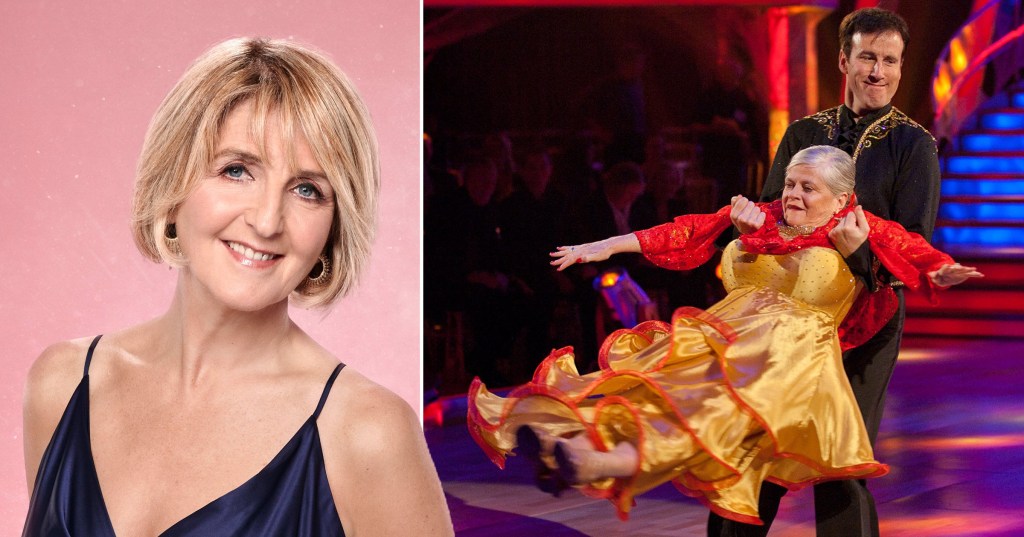 Kaye Adams is looking to a fellow celebrity who has previously starred in the Strictly Come Dancing ballroom as she dusts off her own dancing shoes.

Ann Widdecombe partnered up with Anton Du Beke in 2010, lasting ten weeks on the series.

The former conservative MP couldn’t quite make it to the semi-finals after scoring just 14 out of a possible 40 points during the live shows.

But, as Kaye prepares to jive and cha-cha, she’s looking to Ann to prepare.

This week, Kaye, 59, is set to make her debut on the BBC competition, joining the likes of Fleur East, Kym Marsh, Tony Adams and James Bye in the line-up.

The Loose Women panelist revealed: ‘I am watching YouTube videos of Anne Widdecombe every night.

‘I also downloaded a hugely expensive app from a professional dancer based in America to try to teach myself some steps.’

However, Kaye was left feeling ‘very annoyed’ because she thought she was ‘signing up for a free month’s trial.’

The 59-year-old continued: ‘A friend of mine is a choreographer so he is showing me some of the basic steps and also making me disco dance around the room “like no one is watching.”‘

It’s not long until Kaye will take to the dancefloor for the first time (Picture: Ray Burmiston/PA)

Strictly season is among us! (Picture: PA)

‘He says I have to get used to feeling foolish!’

This comes after Kaye admitted that her bra size has actually gone up while getting ready for the launch of Strictly, although her Loose Women co-stars were less-than-convinced by her discovery.

Ahead of the start of the series, the broadcaster is understandably nervous, with the launch show set to take place on Friday followed by the first live show the following day… but she was left thrilled when having her measurements done in preparation.

On Thursday’s edition of Loose Women, Nadia Sawalha turned to her co-star as she said: ‘Kaye has discovered something about herself.’

‘Are you talking about…’ Kaye responded, before placing her hands over her chest.

Kaye then explained how when creating the outfits for the Strictly participants, ‘they measure you up’, as Judi Love – who competed on the show in 2021 – confirmed: ‘They go right in!’

Kaye quickly had to call out Nadia and Jane’s hysterics over her claim (Picture: ITV)

Nadia giggled as she compared her bra size to her co-star’s (Picture: ITV)

After Kaye told her colleagues that ‘you never go back once you have a built-in gusset’, she outlined how for several years she’s shared a ‘multi-pack of sports bras’ with her 15-year-old daughter, which are a size 36B.

However, after being measured up, it turned out the bra that fit her best was a significantly bigger size.

The Liverpool star did not make the matchday squad against Germany (Pictures: Getty) Gareth Southgate says the door is not closed on Trent Alexander-Arnold making England’s World Cup squad later this year despite being omitted from the matchday squad against Germany on Monday night. The Liverpool defender, who missed last year’s Euros though injury, has […]

The new feature will make sure that explicit messages containing nudity will stay covered unless you choose to view them (Picture: Shutterstock) People sliding into Instagram DMs with unsolicited nudes and sexually explicit images has been a longstanding problem among users. It looks like Instagram is finally working on protecting its users from this unpleasant […]