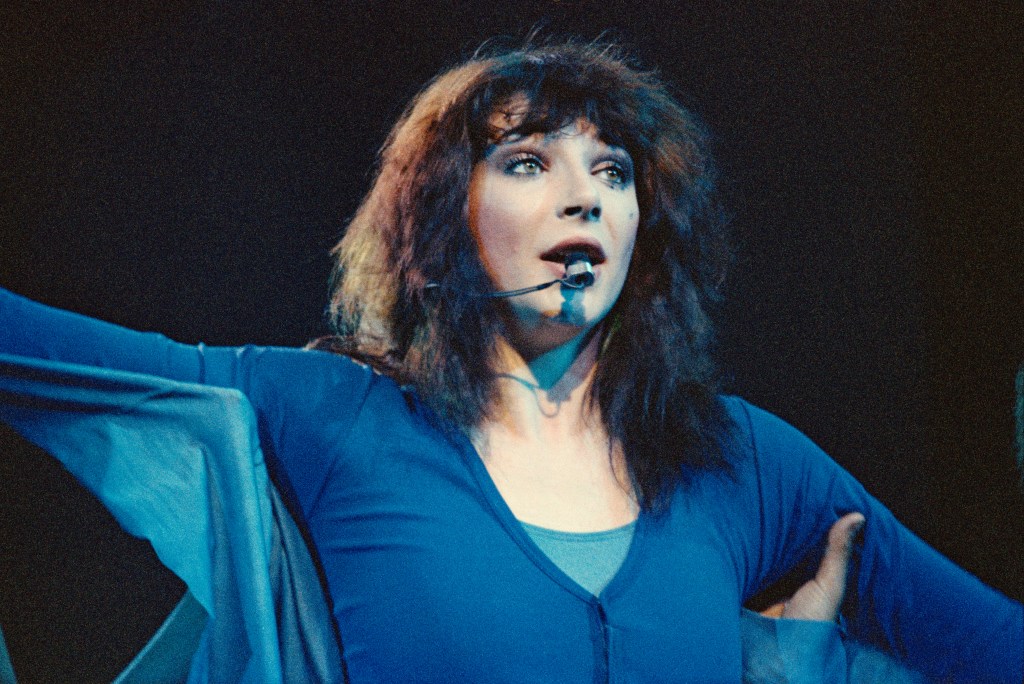 Kate Bush has smashed a slew of Official Chart Records as Running Up That Hill hits number one (Picture: Redferns)

Kate Bush has finally earned her number one spot in the charts for Running Up That Hill – almost 40 years since the song’s release.

The musician has enjoyed an explosion of popularity since Running Up That Hill (A Deal With God) featured in the phenomenal Stranger Things season four.

As her music was discovered for the first time by a brand new generation – and re-discovered by others – the track has shot steadily up the charts in recent weeks, finally dethroning Harry Styles’ As It Was.

Now the track has topped this week’s Official Singles Chart for very first time, 37 years after its release, breaking a slew of Official Chart records in the process.

The Official Charts Company confirmed on Friday that the iconic New Wave track had landed at Number One on the charts, with Kate achieving no less than three all-time records simulatneously.

With 44 years between her 1978 number one Wuthering Heights and her 2022 number one Running Up That Hill, she now boasts the longest-ever gap between number one singles in Official Chart history.

The track enjoyed an explosion of popularity after being featured in a harrowing scene of the new series of Stranger Things (Picture: Netflix )

Musician Kate broke no less than three records with the track hitting the top spot 37 years after its release (Picture: /REX/Shutterstock)

Her success has booted Tom Jones from the title, who had previously held the record with 42 years between Green Grass of Home and (Barry) Islands in the Stream.

She now also claims the record of the longest time taken for a single to reach number one, with Running Up That Hill first entering the charts in August 1985 but peaking at number three.

This record was previously held by Wham!, who saw Last Christmas top the Official Singles Chart 36 years after its release.

To top it all off, on Friday Kate, 63, became the oldest female artist to ever score a number one on the Official Singles Chart, beating fellow icon Cher who was 52 when her hit Believe topped the charts in 1998.

Kate is now the fifth-oldest person ever to hold a number one on the Official Singles Chart, after Captain Sir Tom Moore at 99, Elton John at 74, Tom Jones at 68, and Louis Armstrong at 66.

Martin Talbot, Chief Executive of the Official Charts Company, said it was ‘fantastic’ to see the results for the Wuthering Heights singer.

He said: ‘It has been fantastic to see the iconic Kate Bush climbing up the Official Singles Chart with Running Up That Hill – and to see her breaking a slew of records into the bargain.

Lily D. Moore has big plans for her career (Picture: Rex/@lilydmooreofficial) Actress Lily D. Moore has revealed her career goal is to become the first actress with Down syndrome to win an Oscar. Lily, 19, has been acting since the age of six after falling in love with it after her first drama class, which […]

When does Internet Explorer end and can you still use it after?

Microsoft will be pulling the plug on Internet Explorer (Picture: Gerry Images) It’s time to say goodbye to the long-standing browser Internet Explorer. Microsoft, the creators of the programme, has announced it will be retiring Internet Explorer for good. The tech giant has gradually shifted away from the aging software, starting afresh with the new […]

The actress revealed the news at this year’s British Soap Awards (Pictures: WireImage) Coronation Street star Julia Goulding recently announced her second pregnancy – but did you spot the unique way the star hid her bump during a recent episode? The actress, who plays Shona Platt in the ITV soap, revealed the happy news during […]