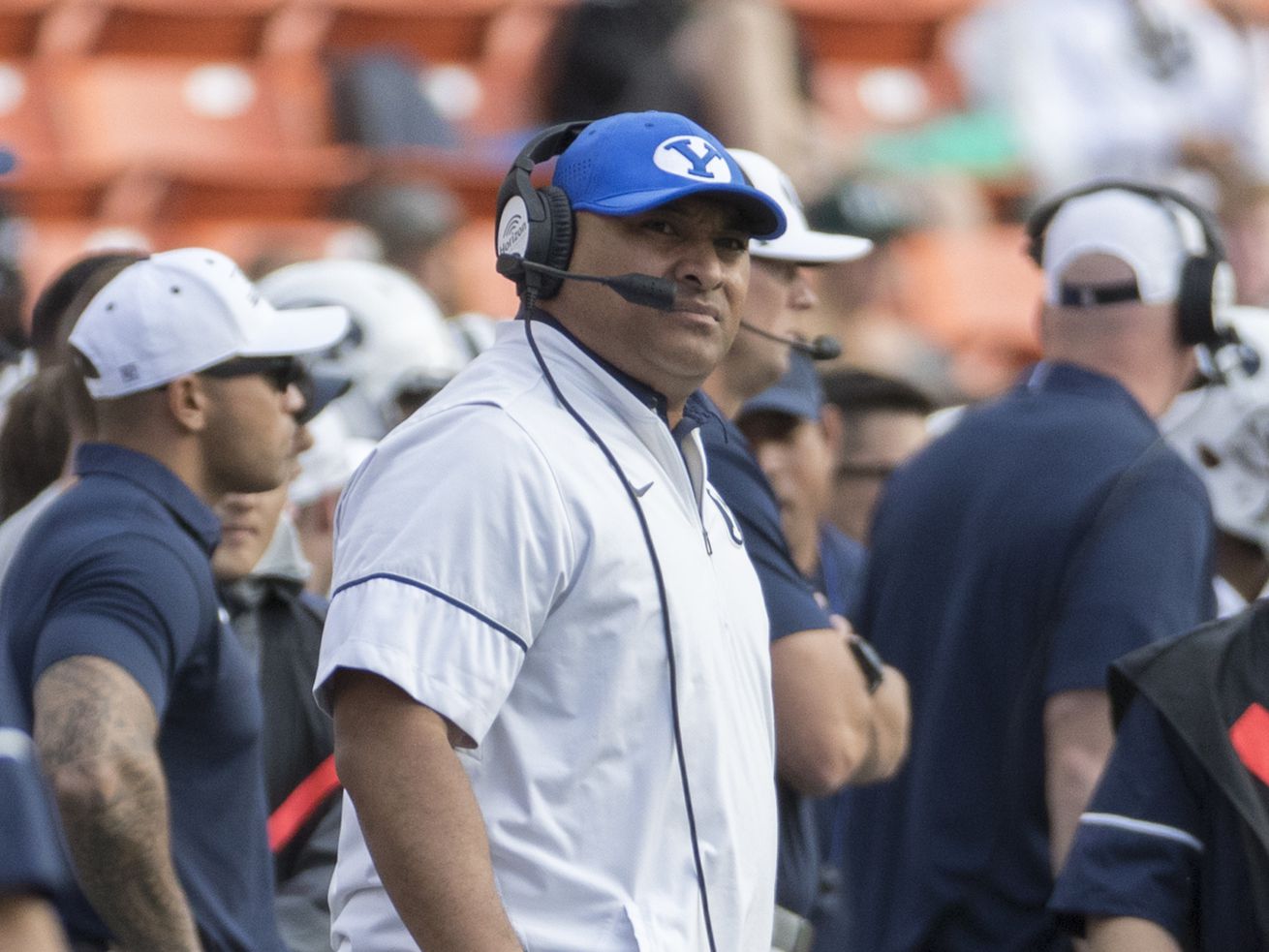 BYU head coach Kalani Sitake looks up at the scoreboard in the first quarter of a game against Hawaii, Saturday, Nov. 25, 2017, in Honolulu. | AP

Kalani Sitake entered spring with excitement, hope and the most experienced depth he’d had since taking the BYU job. How and when he deploys it and against who is a big guess this late.

PROVO — Kalani Sitake is in an awkward box.

He’s scheduled to start fall camp this week, yet he has no announced opponent to start the season.

All those cutouts and scouting breakdowns of Utah are filed away for another year to be updated and re-researched.

His Cougars may open up against, well, anybody, or nobody in September.

And there are cutouts to be done of that first mysterious team.

Or, there could be a delayed season. Or none at all.

Alema Teo, a close friend and founder of the annual All-Poly Camp, which he was able to pull off this summer during the pandemic, said of Sitake’s dilemma: “The unknown is his biggest enemy.”

Said Teo, “Right now, with no information or knowledge about your first opponent puts you kind of in a pinch because you have so many questions. He’s asking himself how much time is he going to have to prepare to give his kids the best opportunity to be ready to play their first game? It’s gotta be frustrating and my hat is off to Kalani. I mean, to be put in that situation, but I know he’ll handle it like a champion and do what is best for the program.”

Sitake would love to be like LSU coach Ed Orgeron and say, “You call us at midnight, we’ll play in a pasture.”

Ed Orgeron on playing football this fall and being flexible:

“You call us at midnight, we’ll play in a pasture.” #LSU

When you have LSU’s roster, you say that easily.

The year 2020 has been a sorry year for sports. What happened to all those athletes gearing up for spring championships or the NCAA’s Big Dance? All of it was just heartbreaking.

And now it’s fall. And in many ways, it remains a freeway driven cross-eyed.

You have to feel for Sitake. This season was supposed to be a kind of coming together for his roster with the right recruits coming in and returning from missionary service and a plethora of starters returning — including three quarterbacks, most of a talented offensive line, the return for senior seasons of honors candidates tight end Matt Bushman and defensive tackle Khyiris Tonga.

It was a front-loaded schedule with a super September of worthy opponents from the Pac-12 and Big Ten, the first-ever matchup with Minnesota and a crack at rival Utah, a team that holds a nine-game win streak against the Cougars, but also a team that is breaking in some defenders, a QB and a replacement for the monstrous Zack Moss.

Nvidia’s Android TV streaming player is a bit pricey, but it offers more advanced video and gaming capabilities than similar devices from Roku and Amazon

Nvidia’s Shield TV streaming boxes have long offered excellent Android TV performance with access to a large assortment of apps. The latest Shield TV has a cylindrical design, and it’s built to be placed behind other components, or in a corner. The powerful device offers advanced 4K, HDR, gaming, and upscaling capabilities, along with integrated […]

Mark Zuckerberg and Jeff Bezos got $14 billion richer in a single day as Facebook and Amazon shrugged off the coronavirus recession (AMZN, FB)

Amazon, Apple, and Facebook all reported blowout earnings on Thursday. The companies’ stock prices all soared following the reports, helping executives continue their winning streak. But as a whole, the US economy is reeling from record job losses and shrinking GDP figures. Visit Business Insider’s homepage for more stories. You’d never know there’s a recession […]