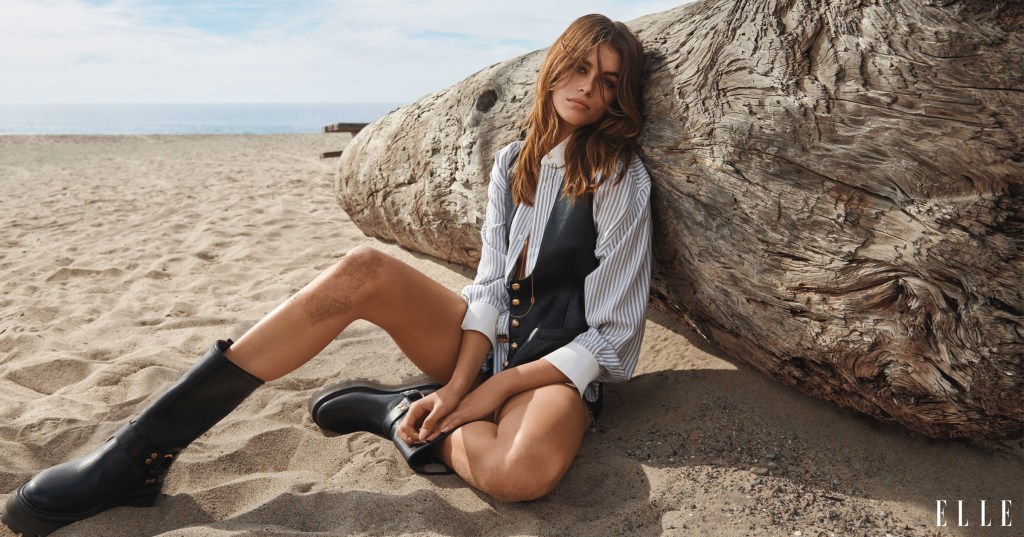 Kaia Gerber has had her say on the ongoing discussion into the nepo babies in the industry, insisting that she won’t ‘deny her privilege’.

There has been intense discourse around nepotism in the entertainment world over the last few months, with many articles questioning the fame and success of children born into influential families.

Jamie Lee Curtis, Lily Allen, Kate Hudson and Noel Gallagher are just some of the famous faces who have joined the debate, while Hailey Bieber proudly sported the phrase on her T-shirt during a recent outing.

In a new interview, Kaia – daughter of supermodel Cindy Crawford and businessman Rande Gerber – was asked for her take on the conversation after following her mother into the modelling world.

‘I won’t deny the privilege that I have. Even if it’s just the fact that I have a really great source of information and someone to give me great advice, that alone I feel very fortunate for,’ she said. ‘My mom always joked, “If I could call and book a Chanel campaign, it would be for me and not you.” But I also have met amazing people through my mom whom I now get to work with.

‘With acting, it’s so different. No artist is going to sacrifice their vision for someone’s kid. That just isn’t how art is made, and what I’m interested in is art. Also, no one wants to work with someone who’s annoying, and not easy to work with, and not kind. Yes, nepotism is prevalent, but I think if it actually was what people make it out to be, we’d see even more of it.’

Kaia opened up about her modelling career and transition to acting (Picture: Cass Bird / ELLE)

Kaia made her modeling debut in a Versace campaign when she was just 10 years old and appeared on the catwalk for the first time six years later.

She has become a staple of the runways since then, walking for Chanel, Fendi, Tom Ford, Saint Laurent, Versace and many, many more.

As well as this, she has made the transition over to acting, popping up in American Horror Story and upcoming stints in Mrs American Pie and Bottoms.

‘I’m only 21, and I feel like I’ve lived a whole life already,’ she told Elle Magazine about growing up in the spotlight. ‘Having the opportunity to travel taught me so much from such a young age. I got this really amazing education. I have this catalog of images that has recorded my growing up. You’re growing, and you’re changing: your body, what you like, your taste. Being surrounded by so many creatives shaped my taste. I’m very much an observer, and I retain a lot.’

To view this video please enable JavaScript, and consider upgrading to a web browser that supports HTML5 video This is the terrifying moment a woman narrowly escaped a boulder that came crashing through her home. Caroline Sasaki was inside her living room in Honolulu, Hawaii, when the enormous rock tumbled down a hill and straight […]

People are not happy that the app lets you have conversations with Hitler, his Nazi lieutenants and other dictators (Picture: Corbis Historical) AI chatbots are having a moment, but one app might have taken it too far by allowing people to chat with famous dead people. In just over two weeks since its launch, the […]