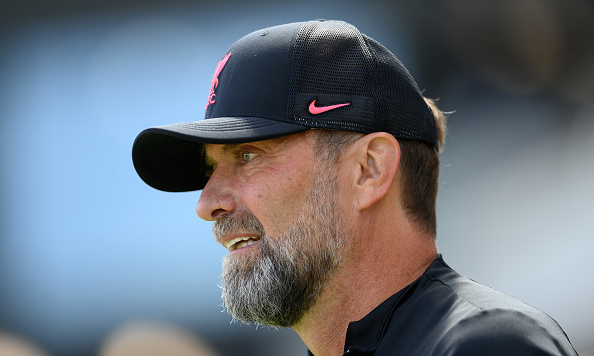 Jurgen Klopp’s side slipped up in the Premier League opener (Picture: Getty Images)

Jurgen Klopp was less than impressed with his Liverpool team’s display after their 2-2 draw with Fulham at Craven Cottage on Saturday.

The newly-promoted side were in a confident mood on their home turf and they started very much in the ascendancy.

Aleksandr Mitrovic was causing Virgil van Dijk and Joel Matip all sorts of problems, and he got his well-deserved opener just after the half-hour mark.

The Mitrovic rose above Trent Alexander-Arnold at the far post and headed home past Reds goalkeeper Alisson.

Liverpool got back on level terms through substitute and debutant Darwin Nunez, but Fulgam were ahead again not long later when Mitrovic converted from the penalty spot after a foul from Van Dijk in the box.

Mohamed Salah managed to rescue a point for the away side, but Klopp wasn’t satisfied with him team’s display and admitted they didn’t deserve more than a point.

‘We got a point from a really bad game from my side,’ Klopp told BT Sport.

‘The attitude wasn’t right in the beginning. Then we wanted to fight back but you don’t find it easy anymore, the pitch was dry, stuff like this.

‘The result is fine, we didn’t deserve more. The performance needs massive improvement.

‘We started the game opposite way we wanted to. Didn’t find direction, pass the ball around against their 4-4-2 in defending. Everybody was under pressure, we couldn’t really break the lines. We never had momentum.

‘We could’ve won the game because we had the bigger chances but it was probably a bit too much.’

‘This result wasn’t about the referee,’ he added

Marvel’s Spider-Man Remastered – a familiar experience (pic: Sony) Sony’s best-selling Spider-Man title comes to PC, but does it really deserve to be called the best superhero game ever? The way in which the video games industry has almost completely ignored the ongoing craze for superheroes, which has been going on for well over a […]