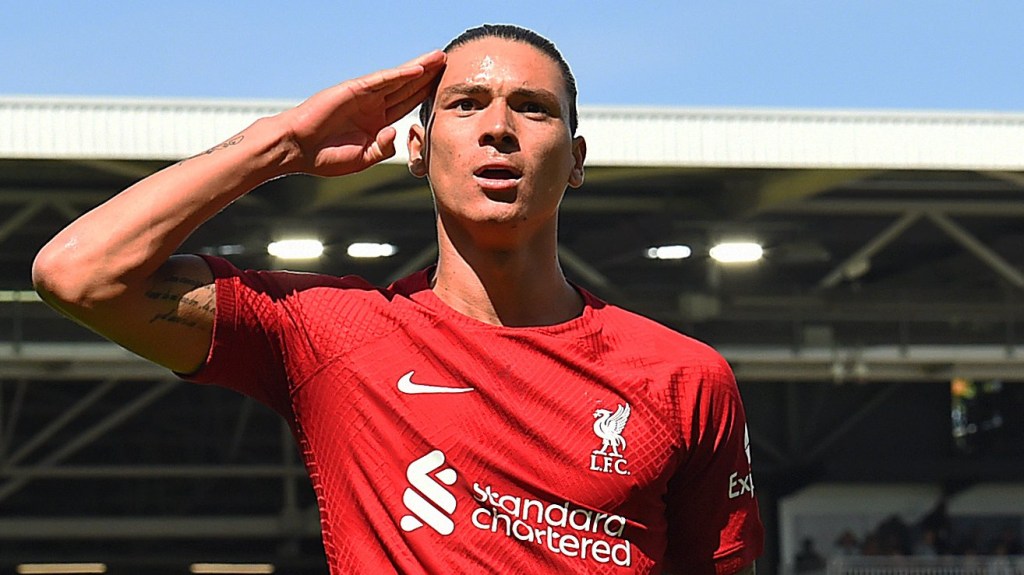 Liverpool went behind on two occasions at Craven Cottage following goals from Aleksandar Mitrovic but Nunez and Mohamed Salah ensured that Klopp’s side escaped with a point.

Nunez, an £85 million summer signing from Benfica, started his first Premier League game on the bench but was brought on in the 51st minute to help Liverpool’s lacklustre attack.

And the Uruguay international delivered a bright performance in Liverpool’s attack and could’ve come away with more than one goal to his name.

‘In a situation like that when we don’t really find a way in front of the goal, you need this extra determination, and the difference as well, it makes it difficult for the opponent, obviously,’ Klopp said of Nunez.

‘A great goal, could have scored another one as well, maybe two, crazy. So, he is involved in a lot of goalscoring situations, that’s really cool and that’s where we have to bring him up.

‘Now imagine we would play good, how often we could set him up then? Because that was obviously our main problem, that our delivery was most of the time not good enough, and that was alright, we had massive chances, it’s crazy.

‘If I would watch it back, if you watch highlights, you could misunderstand this game completely because we had a few really good situations, but between these situations we just didn’t play well.’

When asked about Luis Diaz’s performance, Klopp said: ‘Lucho is a great player, a fantastic player, but today he had a massive chance, super chance.

‘For offensive players on a day like this, it’s really not easy because they defend massively from how they get set up, how the deliveries are, and we didn’t play well enough to bring them in the right moments.

‘But when we were there, then you can see immediately how good Lucho is, how one-one, crossbar or post, I don’t know exactly, but close.

‘Yeah, brilliant player but he can play better than today, like all the South Americans.’

What is the ‘Langya’ virus found in China? Everything you need to know

The Langya virus has reportedly infected people in China (Credits: Shutterstock / Kateryna Kon) A new virus has been found in 35 people in north eastern China, according to a research paper. Although it’s been around since at least 2018, scientists have only now formally identified the virus. They published their study in the prestigious […]

Man charged with murder of mum who disappeared 10 years ago

Claire Holland was last seen going to a local pub before she disappeared (Picture: PA) Someone has been charged for murdering a mum-of-four who went missing a decade ago. Claire Holland, 32, has not been seen since she went to the Seamus O’Donnell’s pub in Bristol town centre on June 6, 2012. CCTV pictured her […]

De Jong and Aubameyang would both prefer to stay (Picture: Getty) Barcelona manager Xavi insists he is counting on both Frenkie de Jong and Pierre-Emerick Aubameyang but has not ruled out both players leaving before the transfer window closes. Manchester United have been chasing a deal to bring de Jong to Old Trafford throughout the […]