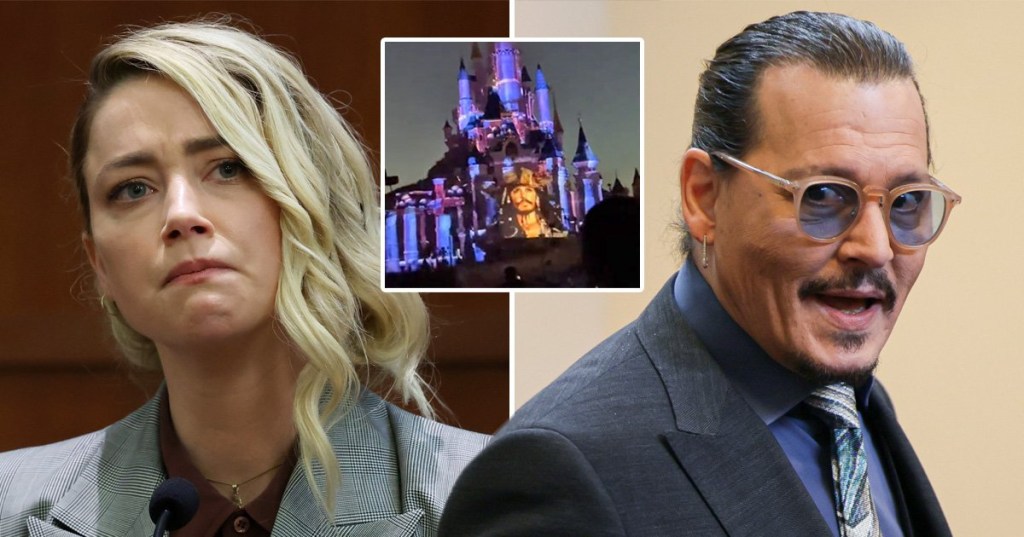 Jack Sparrow found his way back onto the Disney castle (Picture: AP; @deppressead)

An image of Johnny Depp as Captain Jack Sparrow has been projected onto the Disneyland Paris Castle following his triumph in the defamation case against ex-wife Amber Heard.

The image was previously removed after allegations that the actor was a ‘wife beater’ from 2016.

The damning claims led to Disney cutting ties with Johnny, who famously played Sparrow in the Pirates Of The Caribbean film franchise.

But since his recent court victory over Aquaman star Amber, he seems to be firmly back in the fairytale fold with the entertainment company.

The enormous image was projected during an impressive Pirates of the Caribbean display featuring fireworks and pyrotechnics in which a line spoken by Sparrow could also be heard.

Disney ditched the star less than a week after Amber, 36, wrote an opinion piece for The Washington Post, which Johnny argued suggested he was abusive towards her.

Johnny as the iconic Jack Sparrow in 2003 (Picture: Disney/Kobal/REX/Shutterstock)

He also said he fell out of favour with Hollywood because of the article and lost his multi-million pound film career.

He claimed that Amber calling herself a ‘public figure representing domestic abuse’ caused him to lose his role of Sparrow in the blockbuster, which is why he was suing the actress.

In 2018, Disney production chief Sean Bailey confirmed that Johnny was no longer a part of the franchise’s future plans.

He told The Hollywood Reporter, ‘We want to bring in a new energy and vitality. I love the [Pirates] movies, but part of the reason (writers) Paul (Wernick) and Rhett (Reese) are so interesting is that we want to give it a kick in the pants. And that’s what I’ve tasked them with.’

Amber Heard, speaking about the trial to the Today show last week, says she will appeal the verdict (Picture: NBC News)

But fans were cynical about the official line that Johnny’s removal was just about reinvigorating the blockbuster. They have tirelessly demanded that the company reinstate him into the role and apologise.

The actor, who debuted a newly clean-shaven look while rocking out with Jeff Beck at a show in Finland, also wasn’t buying it.

He said in his court case: ‘Two years had gone by of constant worldwide talk about me being this wife-beater. So I’m sure that Disney was trying to cut ties to be safe.

Rocking out: The actor showed off a new clean-shaven look over the weekend as he performed on stage at the Helsinki Blues Festival in Finland,(Picture: EPA)

‘The #MeToo movement was in full swing at that point.’

Last month, a Virginia court jury returned a verdict in favour of Depp and found the Aquaman …read more

The men made off on foot following the savage attack (Picture: Metropolitan Police/PA Wire) Police have released new images of two men wanted in connection with a brutal assault on a Polish man. Kamil Sobala, who had lived in the UK previously, had travelled from Poland to the capital on Saturday. He had planned to […]

Michael Edwards (left) is due to leave Liverpool this summer (Getty) Chelsea are targeting Liverpool’s Michael Edwards as their new sporting director, according to reports. The west London club are undergoing a restructure following Roman Abramovich’s decision to sell the club, with Bruce Buck stepping down as chairman, while Marina Granovskaia will also depart later […]

A couple’s flight from Cardiff ended up being delayed by 20 hours (Picture: Media Wales; Reuters) Passengers who boarded a plane to Turkey have described the ‘nightmare’ of learning it had been cancelled on the tarmac after nearly six hours of delays. The plane from Cardiff to Dalaman was originally due to take off at […]