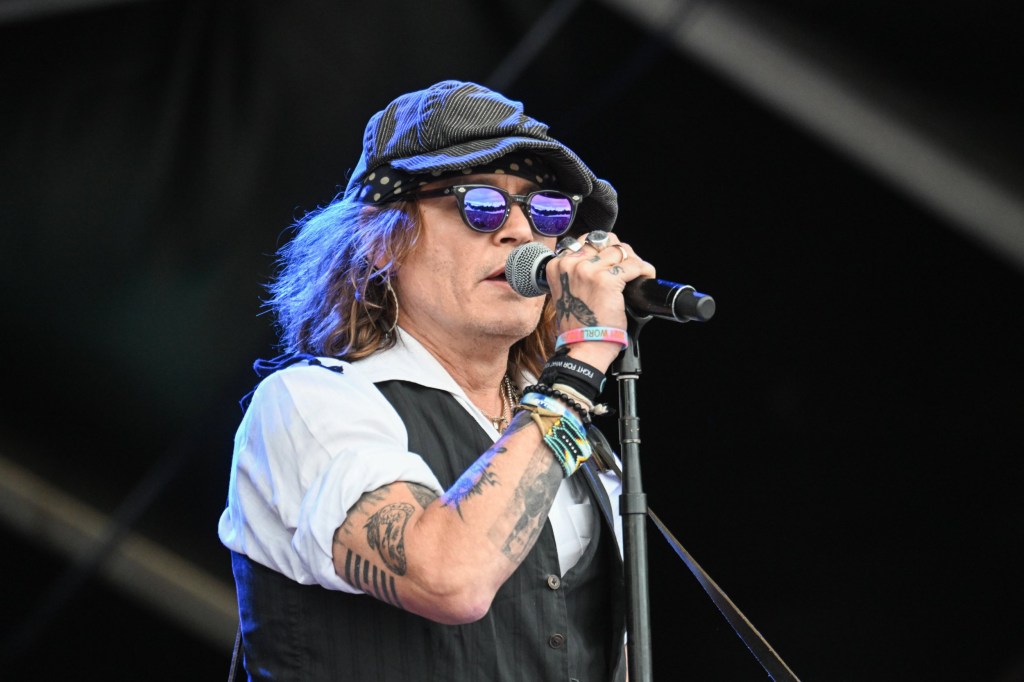 Johnny Depp has stripped off the goatee beard in favour of a cleaner look (Picture: EPA)

Johnny Depp looked noticeably different as he hit the stage on Jeff Beck’s tour over the weekend.

The Edward Scissorhands actor is continuing to perform as a special guest on Jeff’s world tour, which has moved over to mainland Europe following a stint in the UK earlier this month.

On Sunday, the pair shared the stage in Finland to perform at the Helsinki Blues Festival, and some fans no doubt did a double-take as Johnny arrived sporting a fresh look.

It appears the 59-year-old has given himself a mini makeover in the middle of the tour, having debuted a clean-shaven look after getting rid of the goatee beard he wore during his six-week libel trial against ex-wife Amber Heard.

Johnny seemed to be in great spirits as he soaked in the warm reception from the audience, and waved and smiled at them while strumming the guitar on-stage alongside his frequent musical collaborator Jeff.

The pair have grown close in recent months and are even set to release a joint album in July. Last week, they dropped the first single from the record, This Is A Song For Miss Hedy Lamarr, which was inspired by the early Hollywood starlet.

The 59-year-old actor performed at the Helsinki Blues Festival in Finland on Sunday (Picture: Rex Features)

Johnny lapped up the warm reception from the crowds (Picture: Rex Features)

Jeff met the actor in 2016 and they’ve been close friends ever since (Picture: EPA)

Sources say Johnny just wants to focus on rebuilding his career after the trial (Picture: EPA)

Johnny and Jeff, 77, first met in 2016 and the album’s been in the works since 2019, when the actor was also working with Alice Cooper’s supergroup Hollywood Vampires.

Sources close to the Pirates of the Caribbean actor have said he is now focusing on rebuilding his career after going through the gruelling trial against Amber.

The Pirates of the Caribbean actor sported a goatee for the entirety of the trial (Picture: Getty Images)

Johnny and Amber, whose marriage ended in 2017, sued each other resulting in a bombshell trial (Picture: AP)

Johnny filed a lawsuit against the Aquaman actress over an article she wrote detailing her experience with domestic abuse. The actor was not named in the op-ed, which was published by The Washington Post in 2018, but Johnny’s legal team argued it suggested he was physically and abusive towards her.

A jury found Amber did defame Johnny with the article and he was awarded damages of $8.35million after reductions, while the actress herself was also awarded $2m in damages after countersuing her ex-husband.

Boris Johnson visited Zelensky in Kyiv on Friday (PIcture: AFP) Tory MPs have accused Boris Johnson of snubbing the North for another trip to see Volodymyr Zelensky just days before a crucial by-election. The Prime Minister was reportedly travelling up on a train to Doncaster yesterday morning when he decided to travel to Kyiv at […]

Yinka Bokinni continues to be booked and busy with her presenting gigs (Picture: Getty Images) Channel 4’s new body positive series Naked Education promises to be an unfiltered look at sex and the body, the show’s host has teased.  Yinka Bokinni will be fronting the new programme alongside Anna Richardson to answer the burning questions […]