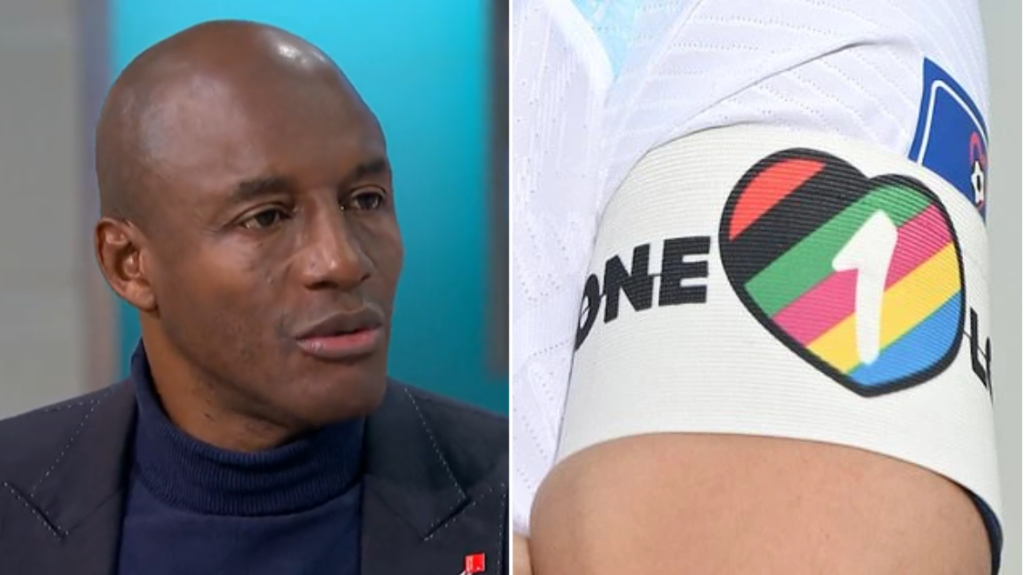 Former footballer John Fashanu made an excruciating appearance on Good Morning Britain on Thursday in which he blasted the World Cup protests and claimed it was ‘culturally inappropriate’ to wear a ‘OneLove’ armband.

FIFA’s decision to host the tournament in Qatar – where homosexuality is outlawed and women’s rights limited – has been clouded in controversy particularly after players were threatened with sanctions if they wore the rainbow armband in matches.

The ‘OneLove’ gesture was designed to show solidarity with the LGBTQ+ community and Germany’s players responded to FIFA’s intervention by posing for a team photo on Wednesday with their hands covering their mouths, saying they were ‘being denied a voice’.

But former Wimbledon player Fashanu, whose brother Justin was the first professional footballer to come out as gay and later took his own life, hit out at the protests and claims players at the World Cup should respect Qatar’s archaic laws and avoid politicising the sport.

Speaking on GMB on Thursday morning, he said: ‘The OneLove armband, what has that got to do with football? How did that merge into the world of football?

‘Politics and football, we try to keep them away from each other because if politics goes into football – which is what is happening – the politics go up and up and up and then eventually they will win. So I’m just very disappointed.

‘I don’t think they [the federations] should have even threatened [to wear the armbands] because I just don’t think it’s got anything to do with football at all.

‘We’ve said it time and time again, if they’re going to award Qatar the opportunity to have this wonderful opportunity for football, you would like to think that everybody would adhere to the rules and the regulations of the country. Simple.’

Asked if he thinks it is therefore ‘culturally inappropriate’ to make a protest, Fashanu continued: ‘Very inappropriate, yes. I think that whatever the rules and the regulations are of that country, whatever they might be, adhere to them.

Germany’s players hit back at FIFA’s decision to ‘gag’ them (Picture: Getty)

Fashanu’s appearance on GMB was such a car crash that he immediately started trending on Twitter with viewers in disbelief over his comments.

John Fashanu. Wow. I agree that Qatar has rules but this is about human rights. This is about diversity …read more

Marcus Rashford shared a kiss with his fiancee Lucia Loi (Picture: World Cup News Pool) Marcus Rashford, Harry Kane, Jack Grealish, and Luke Shaw were among those heading straight for their partners in the stands after the England team stormed to a 3-0 win against Wales. It means England are comfortably through to the knock-out […]

Reece James missed out on World Cup selection due to injury (Picture: Getty) Not many forwards get the better of Reece James but the Chelsea but the convalescing Chelsea wing-back has opened up on the three toughest opponents he has faced during his career. But for an unfortunate injury, James would no doubt be out […]

To view this video please enable JavaScript, and consider upgrading to a web browser that supports HTML5 video Channel 4 has dropped the first teaser for the trial that had the nation hooked: Rebekah Vardy versus Coleen Rooney. Telling the tale of the Wagatha Christie trial, a libel case that began in 2019 and concluded this […]