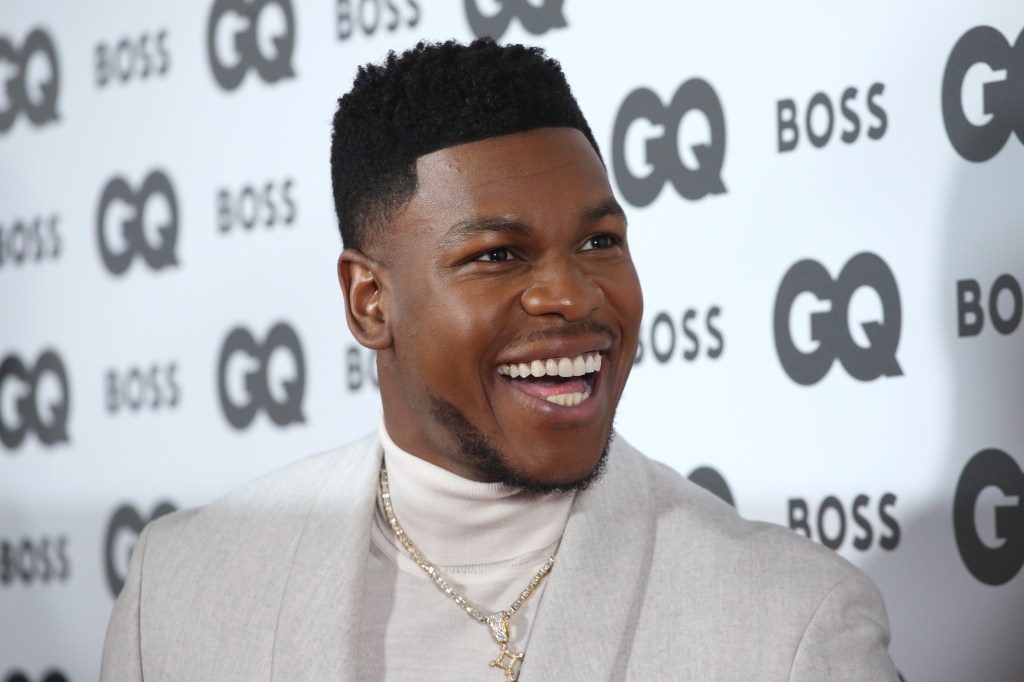 John Boyega has come a long way since his days of promoting puberty (Picture: Getty Images)

Before he became the face of blockbusters such as Star Wars, John Boyega was the face of, well, puberty.

That’s right, the critically acclaimed actor was busy making sure the kids were well-clued up on what lay ahead for them in their teenage years.

Well, he was happy enough to lend his face for promo material, at least.

An eagle-eyed fan noticed a very familiar face pop up in her child’s school lesson about puberty and recognised it to be the one and only John Boyega.

The woman shared a screenshot of the photo, which shows the Woman King actor smiling widely while dressed in smart clothes and standing between two men and two women.

‘Hey @JohnBoyega why are you in my child development lecture about puberty?’ the fan asked in a Twitter post.

John, 30, quipped back: ‘We all gotta start somewhere.’

He later joked in an Instagram post: ‘This was a £50 payday! Look at that damn smile. I was already doing budgets. Looool #thejourney.’

Fans of the Attack The Block star couldn’t get over John’s youthful looks, with one quipping: ‘I wish puberty had a warning label. Like “Not guaranteed to be as ridiculously handsome as John Boyega”.’

Another laughed: ‘This is hysterical – I love it! 😂 So humble! From puberty pamphlet to hero in A Galaxy Far, Far Away!’

He’s perhaps best known these days as a blockbuster star after landing the role of Finn in the latest Star Wars trilogy (Picture: Rex Features)

He most starred alongside Viola Davis in The Woman King (Picture: AP)

John can look back with a smile at where his career began (Picture: WireImage)

On more of a sentimental note, another added: ‘This shows people who we only can see their fame and success are not from nowhere. You are now where you are because of your hard work! 50 pounds well earned!! 😍😍

‘Also what’s wrong with puberty😉 so much fun with this rollercoaster ride haha wheeee.’

Of course, John has come a long way since promoting puberty – and has certainly earned more than £50 in the process.

After starring in British projects such as Attack The Block and My Murder, John went on to land the role of Finn in the recent Star Wars trilogy, appearing in The Force Awakens, The Last Jedi and The Rise of Skywalker between 2015 and 2019.

He most recently starred alongside Viola Davis and Lashana Lynch in historical epic The Woman King.

According to this year’s Sunday Times Rich List, John is worth an estimated £19million.

Holly Willoughby ditches This Morning to watch her son’s nativity play: ‘I’m ready to have a cry’

…read more Source:: Metro        (Visited 1 times, 1 visits today)BBC ‘trying to tempt Holly Willoughby away from ITV’ after queuegate Could Holly make a significant transition from ITV to the BBC? (Picture: Ian West/PA) The BBC is said to be attempting to woo Holly Willoughby…Far Cry 6 Lost Between Worlds DLC is out next […]

Will Young challenges ‘greedy’ David Beckham over Qatar relationship in angry open letter: ‘Donate £1,000,000 per year from your odious deal’

Beckham has attracted more criticism for his World Cup role (Picture: Getty) Will Young has delivered a blistering attack on David Beckham for his lucrative deal with Qatar to act as an ambassador during the World Cup. Taking to Instagram, the singer posted a fierce open letter, criticising the human rights abuse that is ongoing […]