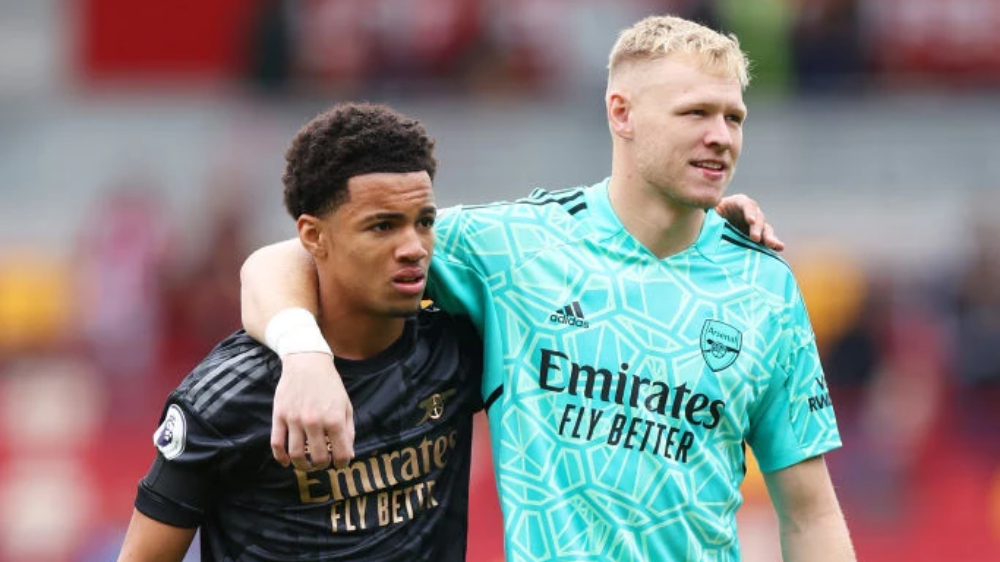 John Barnes has sent a message to Arsenal boss Mikel Arteta over Ethan Nwaneri amid comparisons to Lionel Messi and Cristiano Ronaldo.

Nwaneri became the youngest player in Premier League history after making his debut for the Gunners in their victory over Brentford on Sunday.

Nwaneri, 15, replaced Arsenal goalscorer Fabio Vieira in injury-time after being included in Arteta’s squad for the trip to Brentford.

The midfielder, who was born in March 2007, was called up for first-team training for the first time on Saturday.

As Nwaneri made Premier League history, Arsenal fans sang: ‘He’s going to school in the morning!’

Arsenal fast-tracked the decision to push Nwaneri into the first-team due to interest from Manchester United and Liverpool.

But Barnes has told Arteta to ‘leave him alone’ and feels Nwaneri is not ‘going to go in the team and play every week’ like Messi and Ronaldo when they started.

‘If you look at the future, the future looks bright for Arsenal in terms of a lot of the young players,’ Barnes told BonusCodeBets.

‘Saka, you know, Martinelli, Odegaard. They’ve got a good, young team. But a 15-year-old being given his debut?

‘You should leave him alone because of course, Theo Walcott made his debut at 16 and this young boy coming in is not going to be anywhere near Arsenal’s first team to be honest with you, when push comes to shove.

‘It’s great for Arsenal to say we’ve got good young players coming through.

‘But all of a sudden, I don’t want people to then put so much pressure on this young boy because he made his debut to say he should be playing all the time.

‘It’s great for him and great for Arsenal for the future.

‘I’m not saying it’s a gimmick because he’s good enough to obviously be playing but I don’t think it’s a situation whereby you’re looking at a Lionel Messi at 16 or Cristiano Ronaldo knowing that he’s going to go in the team and play every week.

‘So it’s good news at Arsenal pushing their youngsters through but I don’t want to put pressure on this young boy and all of a sudden overemphasise that he should be playing this season or even next season.’

Jose Mourinho is looking to bolster his defensive options at Roma (Picture: Getty) Roma boss Jose Mourinho is keen to raid his former club Manchester United and sign Diogo Dalot but faces competition from Barcelona, who are also keeping tabs on another Red Devils star. Dalot has largely been on the periphery at Old Trafford […]

Labour would renationalise railways but has dropped its plan to take control of utilities firms (Picture: Getty) The Labour Party has reaffirmed its pledge to bring railways back under state ownership if it wins the next election. This is a breaking news story, more to follow soon… Check back shortly for further updates. Got a […]

It’s more important than ever that schools do their utmost to protect their students from harm and bullying (Picture: Getty Images/iStockphoto) The first adult I told I was trans was my school’s councillor when I was 17 years old. It was a place that I felt safe, as I wasn’t sure how my family or […]