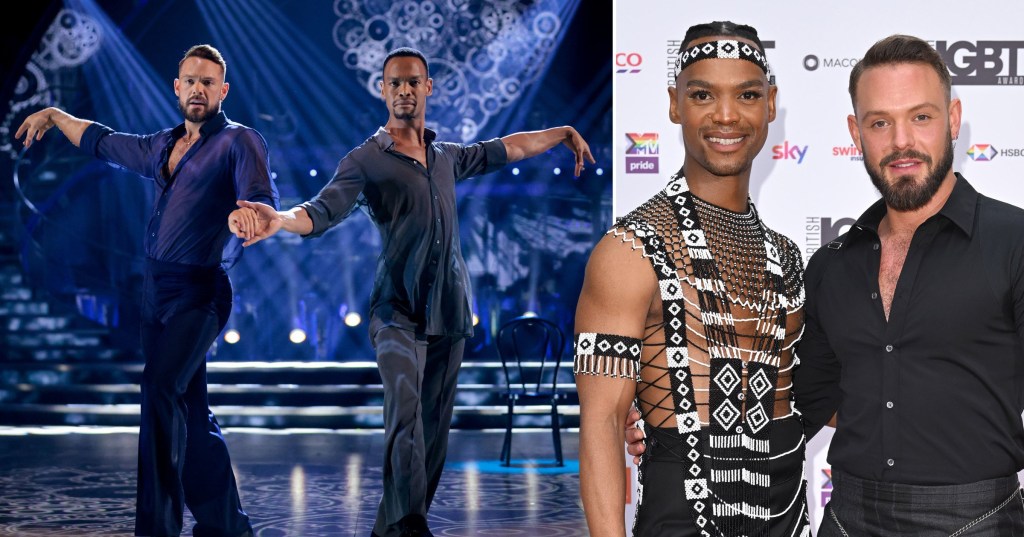 Strictly Come Dancing pro dancer Johannes Radebe has fondly looked back on his time in the competition with John Whaite, as he prepares to partner with a new contestant for 2022.

The South African dancer, 35, has made history on the programme on several occasions since joining the line-up of professionals in 2018.

He performed the show’s first same-sex routine with Graziano Di Prima in 2019 before making it to the final of the competition with Great British Bake Off star John Whaite in the show’s first all-male couple last year.

The dynamic duo finished in second place behind Rose Ayling-Ellis and Giovanni Pernice, who went on to become winners.

However, despite missing out on the Glitterball Trophy, John and Johannes won the hearts of millions of viewers and have remained firm friends ever since.

And as Johannes gets ready for another year of Strictly madness, he’s reminisced about his journey with John last year, with a very sweet post on Instagram.

The pair wowed fans throughout the series (Picture: PA)

He penned: ‘Now that Strictly rehearsals have started, I’ve been thinking back to last year when I had the pleasure of meeting @john_whaite.

‘I can’t believe it’s been a year since John came into my life and what a fabulous and truly special Strictly journey we had.

‘There were moments during the show which took my breath away, including the overwhelming support we received.’

He went on to thank fans for all the ‘kind comments’ and for voting for the pair throughout the competition, commenting: ‘It means so so much.’

Johannes started a selection of photos of the pair together, continuing: ‘Not only is John an amazing dancer, he is an incredible friend and I can’t imagine a life without him in it.

The pair have remained close friends ever since (Picture: Karwai Tang/WireImage)

‘Although my Strictly journey with John has come to a close, I’m feeling the energy and magic of the show again and I am looking forward to the next Strictly chapter and the excitement and challenges this will bring.

The post moved many fans, as well as John himself, who replied: ‘You bugger – you’ve made me cry into my avocado on toast ❤️ love you MJR x.’

John shared his happiness over Richie Anderson being confirmed to be part of an all-male couple (Picture: Instagram/@john_whaite)

It comes as John reacted earlier on Saturday to the news Radio 2 and The One Show favourite Richie Anderson would be about to follow in his footsteps in an all-male couple.

John wrote on his Instagram stories: ‘I’m so bloody pleased that Strictly are doing a male-male couple again this year and hope it is the case every year from now on.

‘It has to be,’ the chef added. ‘Because queer-inclusion isn’t a box-ticking exercise for one series, it’s a fundamental shift in the narrative for life.’

Mr Blobby made his wrestling debut over the weekend (Picture: @Ivy_Wrestler/Rex) For several generations of Brits, just the name Mr. Blobby is enough to conjure feelings of total horror or childlike glee. Now, the beloved/feared iconic children’s TV character seems to have taken his talents to the world of wrestling, perhaps in a bid to […]

The woman pictured is being looked for by the police (Picture: Crimestoppers) A woman is accused of racially abusing an elderly pensioner on crutches and spitting at two others while on a bus. The incident occurred on Saturday, July 23 at 4.30pm on board the northbound route 24 bus to Hampstead Heath in London. It […]

The capital was hit by major flooding last year (Picture: Getty) Londoners have been told to brace for significant flash flooding if downpours hit the capital. Dry ground does not absorb water as quickly, meaning that when rain does arrive the city is far more likely to face problems, like those seen last summer. Experts […]