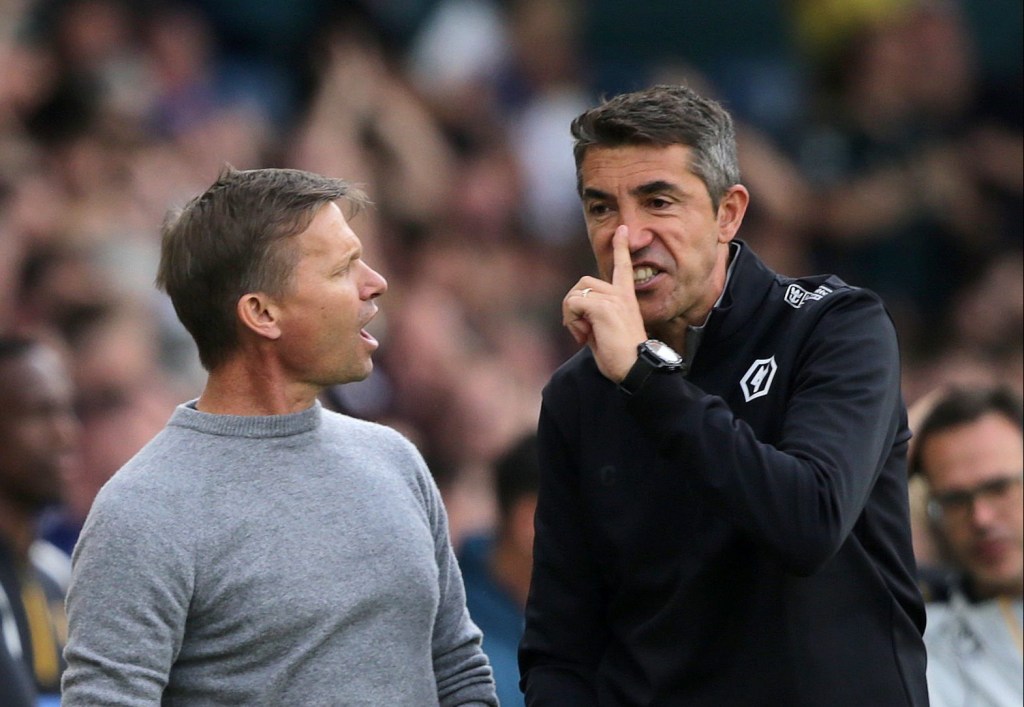 Rodrigo levelled the score for Leeds before Rayan Ait-Nouri’s own goal sealed the three point for the hosts.

But after the full-time whistle, Lage and Marsch were involved in a heated exchange before the Wolves boss headed down the tunnel.

Giving his version of the bust-up at full time, Lage said: ‘In the first half, there were things that we cannot say, especially in these days, and I heard that, so if someone wants to apologise to me, it should be in that moment, not in the end when you’ve won the game.

‘There were plenty of moments between the first-half and then end of the game when we could have shaken hands and apologised, it didn’t happen and after in the end it’s more difficult to accept because there was a long time to do that.

‘There’s nothing wrong between the managers, life goes on and now we look forward to play the next game against Fulham.’

Speaking about the altercation with Lage, Marsch said: ‘It’s normal in some ways.

‘I respect Bruno a lot. He does a great job with his team, so no problem.’

When it was suggested that he and Lage had two confrontations in the game, Marsch said: ‘Well, you can go back to it at Wolves last year. There’s emotion in these moments.

‘I wanted to be respectful afterwards but it didn’t quite go that way. I’m okay. I think he’s okay too.’

Man stabbed to death near Oxford Street in central London

A man has been stabbed to death in a side road near London’s Oxford Street. The Metropolitan Police said officers were called at around 11.40am on Monday to reports of a stabbing in Poland Street. Both London Ambulance Service and the air ambulance attended but the victim was pronounced dead at the scene 40 minutes […]

Lives are on the line as a shock showdown ensues (Picture: Lime Pictures) A tense and dramatic week is about to commence in Hollyoaks, as The Undertaker (Glynis Barber) takes steps to eliminate Sienna Blake (Anna Passey) from the equation once and for all. The villainous gangster, as viewers know, is intent on getting Sienna […]