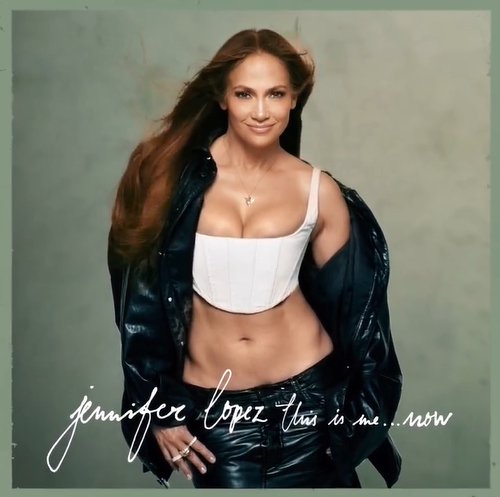 Jennifer Lopez has announced she is releasing a new album after cryptically wiping her social media accounts.

The singer and actress got the rumour mill whirling this week when she changed her Instagram photo to a black box, and removed every post from her account.

Fans had speculated – or at least hoped – the cryptic move meant she was getting ready to announce a new project, and now all has been revealed.

The Jenny From The Block icon is indeed releasing a new album, titled This Is Me… Now, a clear nod to her 2002 album This Is Me… Then.

J-Lo revealed the news on Friday with a post on her previously blank account, featuring the album cover of her This Is Me… Then album.

However when viewers clicked into the post, the album cover Jen suddenly moves and morphs into current-day Jen, as the star sings: ‘This is me now.’

Jennifer Lopez has revealed the reason for that cryptic lockdown of her social media accounts (Picture: Instagram/ @jlo)

This Is Me… Then was released 20 years ago, with the new album coming in 2023 (Picture: Amazon)

The very short snippet of music we hear is likely from one of the new album tracks, as the icon even revealed the track listing for the upcoming record – track one being ‘This Is Me … Now.’

Back in 2002, Jennifer penned her original album while she was with then-fiance Ben Affleck, and the record included a track talking to him called Dear Ben.

While the pair split weeks before their wedding, they recently reunited – and this year, closes to 20 years after the original date, they were married.

And the new album reflects this, with one of the tracks titled Dear Ben Pt II.

Fans are, naturally, losing their mind over the announcement, and have flooded the singer’s Instagram posts with excited messages, many in full caps.

One person pronounced her a ‘LIVING LEGEND,’ while another agreed she was ‘ICONIC.’

The record will feature a sequel to her 2002 song Dear Ben (Picture: @JLo/Instagram)

Many pointed out the inclusion of a Dear Ben part two, with one fan saying: ‘We need him in the video!’

Following a popular trend on the app, J-Lo sat on Ben’s knee and smiled ear to ear as sweet audio played underneath the loved-up video of the pair.

Matt Hancock didn’t do the media rounds on Monday (Picture: Rex/ITV) Matt Hancock was the only I’m A Celebrity… Get Me Out Of Here! finalist not to appear on Good Morning Britain after the grand final. The former Health Secretary snubbed ITV’s breakfast show on Monday morning after finishing in third place on the reality […]

Kim Kardashian was definitely not feeling the winter chill as she partied in Miami this week (Picture: MiamiPixx/Vaem / Backgrid) It might be freezing cold in the UK, but in the world of celebrities it’s summer year-round, as proven by Kim Kardashian. The reality TV icon is preparing for Christmas with her family, including her […]

Vicky Pattison shows off her ‘cellulite, tummy rolls and absolutely no lips’ in honest post comparing reality and glam