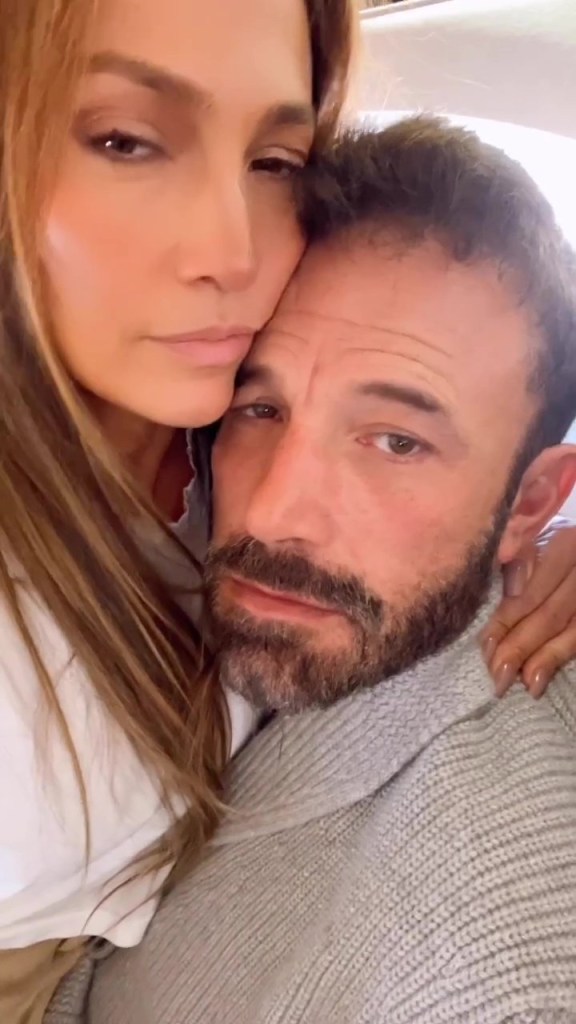 Jennifer Lopez has posted an adorable clip of herself with new husband Ben Affleck as they made their couple debut on her TikTok.

The actress and singer, 53, has been on the social media platform since 2019 and amassed 15.3 million followers in the meantime.

However, J-Lo took a detour from her usual videos, which often revolve around her onscreen work in movies like the upcoming Shotgun Wedding, her performing and her JLo Beauty line, to share something a bit more personal.

On Sunday, she posted a TikTok of her and Ben cuddling closely as they look into the camera, starting off with straight faces before cracking into wide smiles as the trending voiceover from Pink’s hit Try that said: ‘Guys I did it! I found the person that makes me the happiest I have ever been.’

Fans were loving the sweet moment and flocked to the comments to share their support.

‘Bennifer 2.0 I am here for it!! Wishing you all the best for a lifetime of love!!’ wrote one, while another joked: ‘Their breakup was a tough one for me lol. I love that they found their way back to each other.’

Jen and Ben started off looking serious before he heard what was being said (Picture: JLo/TikTok)

The couple then beamed (Picture: JLo/TikTok)

‘“If you love something, set it free. If it comes back, it’s yours. If it doesn’t, it never was.” I think he’s yours,’ pointed out a third.

J-Lo was snuggling up with her Oscar-winning hubby, 50, as they flew on a private plane.

Jen was relaxed in a white T-shirt while Batman actor Ben looked warm in beige knitwear.

The couple sent fans into a spin when they rekindled their romance last year, nearly two decades after they first dated.

They tied the knot earlier this year (Picture: Getty)

A year after they were linked once again, the Hustlers actress confirmed they were engaged, showing off her huge diamond ring.

They wasted no time with a long engagement and whisked themselves over to Vegas a few weeks later to make it official, before saying their ‘I dos’ for a second time in August, surrounded by family and close friends for a lavish celebration.

Jen recently hit back at criticism over her decision to take Ben’s surname, telling Vogue: ‘People are still going to call me Jennifer Lopez. But …read more

Mike has proven a hit with viewers (Picture: ITV/Shutterstock) Mike Tindall has proven a real hit in this year’s I’m A Celebrity… Get Me Out Of Here! and now a pal of the former rugby player has revealed his reasons for signing up. The sports star entered the camp alongside the likes of Boy George, […]

The deputy prime faces an investigation into his conduct (Picture: PA) Dominic Raab has insisted he ‘behaved professionally at all times’ as he continues to deny the bully allegations against him. According to data from a poll, carried out in 2019, at least 15 of his staff reported witnessing another person being bullied or treated […]

Alexa has revolutionised voice assistants, but she doesn’t seem to make Amazon much money (Credit: Amazon) Think of Amazon’s most successful product, and you probably come up with either the Kindle e-reader or Alexa. But, as it turns out, the all-conquering voice assistant may not have such a glowing reputation inside the company. After announcing […]