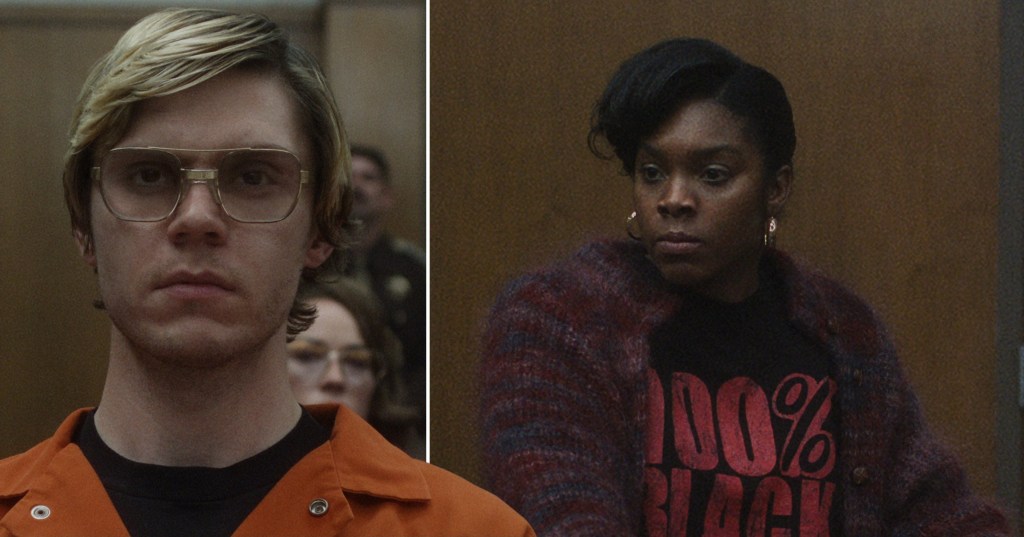 The family are reportedly not happy about the new series (Pictures: Netflix)

New Netflix series Monster: The Jeffrey Dahmer Story has been slammed by one of the serial killer’s victim’s family members claiming the show has ‘retraumatised’ their loved ones.

The series was released on Netflix on September 22 telling the story of Milwaukee serial killer Jeffrey Dahmer, including his childhood, adult life, crimes, how he was caught, and the court case that followed.

Monster sees American Horror Story star Evan Peters take on the role of Dahmer, who was convicted of brutally killing 17 victims in total, all male, between the years of 1978 and 1991.

Following his capture by police, he was eventually imprisoned in 1992.

Once in prison, Dahmer died at the age of 34 after being beaten to death by another inmate.

A scene from the series has gone viral since its release, in which Rita Isbell, the older sister of Errol Lindsey, a 19-year-old man who was killed by Dahmer, speaks during the killer’s trial.

Evan Peters takes on the role of Jeffrey Dahmer in the Netflix series (Picture: Netflix)

One scene, in particular, has gone viral due to its likeness to the real-life trial (Picture: Netflix)

Many have compared the scene to real-life footage from the 1992 trial, sharing the comparisons across social media.

However, a family member of Isbell and Lindsey has condemned the series and claimed they are unhappy with it being made.

‘I’m not telling anyone what to watch, I know true crime media is huge right now, but if you’re actually curious about the victims, my family (the Isbells) are p****d about this show,’ Twitter user @ericthulu wrote on their page, who says Lindsey and Isbell are his cousins.

‘It’s retraumatising over and over again, and for what? How many movies/shows/documentaries do we need?

Iâm not telling anyone what to watch, I know true crime media is huge rn, but if youâre actually curious about the victims, my family (the Isbellâs) are pissed about this show. Itâs retraumatizing over and over again, and for what? How many movies/shows/documentaries do we need? https://t.co/CRQjXWAvjx

He also wrote on his Instagram page that he would not be watching the series.

‘No my family is not happy. RIP to my cousin Errol Lindsey and all the other victims,’ he said.

The ten-part series is told through the lives of the victims who were impacted by the systemic racism and institutional failures of the police that allowed Dahmer to continue his killing spree from 1978 to 1991.

It also focuses on errors made by the Wisconsin police forces during their hunt for him.

Monster: The Jeffrey Dahmer Story is available to watch on Netflix now.

After the Queen’s death, I gave up on watching The Crown – there’s too much at stake for the monarchy

The problem is that The Crown, although it comes with a disclaimer of being dramatised, is clearly guessing at the truth (Picture: Getty Images/Netflix) The day after the Queen died, I turned to Netflix and put on The Crown episode of Elizabeth II’s coronation, and I had a little cry. It felt poetic and apt.  […]

The US actress married the fashion executive after one year together (Picture: REX) House of Cards actress Robin Wright has filed for divorce from her husband, Clément Giraudet, according to reports. The TV star, 56, who played Claire Underwood in the Netflix political drama, began her romance with the Yves Saint Laurent executive, 37, in 2017. […]

What does Yom Kippur mean and how to wish someone a Happy Yom Kippur in Hebrew?

Yom Kippur is the holiest day in the Jewish calendar (Picture: Getty Images) Yom Kippur is considered to be the most important day for people of the Jewish faith, falling 10 days after Rosh Hashanah – Jewish New Year. The day begins at sundown on Tuesday October 4 and will be observed with a 25 […]