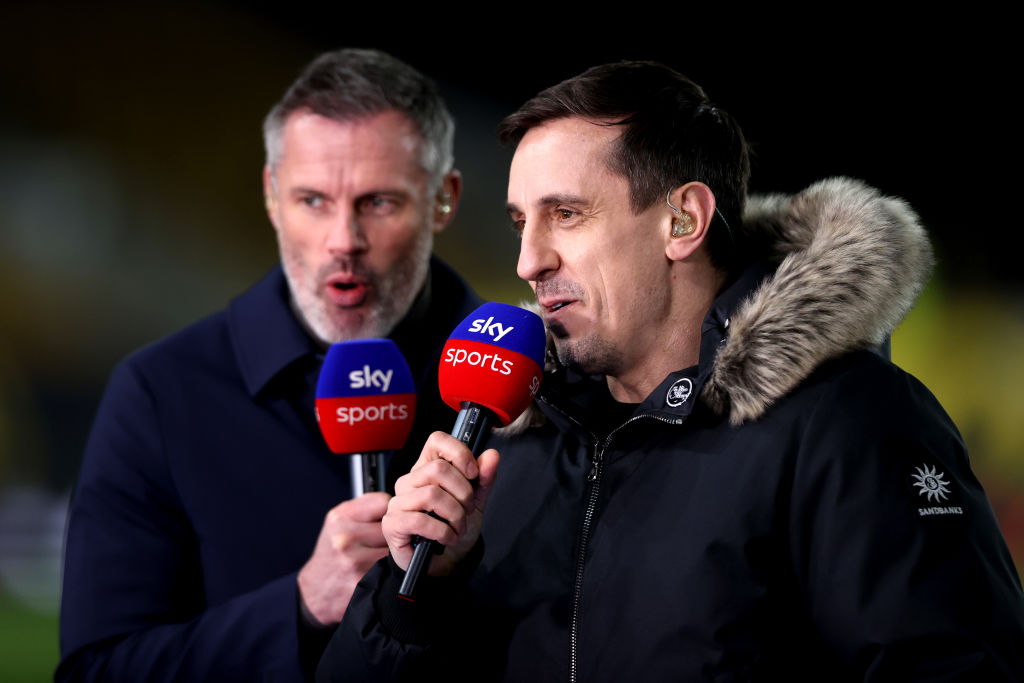 The two Sky Sports pundits were giving their predictions for the top four at the end of the season after Tottenham’s win over Fulham on Monday night.

Neville still reckons fifth-placed Spurs will be back in the Champions League spots by the end of the season, but Carragher has been suitably impressed by Newcastle to think they will hang on to a top four place.

Eddie Howe’s team sit third in the table and have conceded just 11 goals in 20 league games, fewer than any other side in the division, and Carragher reckons they can keep it up.

‘They’re not involved in European football,’ the Liverpool legend told Sky Sports of the Magpies. ‘I’ve been that impressed with them. They’re the best defensive team in the league, so we’re not talking about some easy touch, scoring goals but they’re all over the place.

‘They’re very organised, the energy they play with…Of course Tottenham or someone else could get there, but no European football, the home games, the atmosphere, it feels like there’s a togetherness between them and the crowd that maybe I don’t see at Tottenham.

Carragher backed Arsenal to take top spot, followed by Manchester City, Manchester United and Newcastle, confirming to fans of his own club: ‘I don’t think Liverpool will get top four.’

Newcastle have lost just one game of their 20 in the Premier League so far this season (Picture: Getty Images)

Despite Arsenal being five points clear at the top of the table, with a game in hand on Manchester City, Neville thinks Pep Guardiola’s side will retain their Premier League title.

He even thinks Manchester United can finish above the Gunners, with Spurs taking the fourth Champions League spot.

The Red Devils hero first made those picks before Arsenal beat United on Sunday but is sticking to his guns, saying: ‘Arsenal were far better than Manchester United yesterday [Sunday], I’ve got no complaints whatsoever. But I’m going to stick to my predictions, you can be wrong with predictions.’

There is a break in the Premier League action this weekend with the FA Cup fourth round being played and the two title contenders meet at the Etihad on Friday night as Manchester City host Arsenal.

Daniel Swift is the sixth known American to have died in the Russian-Ukraine war (Picture: Getty Images Europe) A former US Navy SEAL was killed in Ukraine Thursday morning after being wounded days before fighting alongside Ukrainian soldiers, per reports. Daniel Swift, 35, was a special warfare operator 1st class before deserting the military nearly […]

‘Continue to shine bright, my guiding light,’ the actor wrote (Picture: Danny Moloshok/Invision/AP Images) Regina King has paid heartfelt tribute to her late son Ian Alexander Jr, a year after he tragically died at the age of 26. Sharing a post on Instagram, the Oscar-winning actor explained that January 19 was Ian’s ‘Worthday’, as she […]

Brooke Vincent returns to Coronation Street and fans are in shock Painful death trauma for Daisy in Corrie 19 Coronation Street pictures reveal big death tragedy, Tyrone cheats and arrest shock As Max remains resistant, this will eventually lead to further trouble for him, as he ends up watching a live-stream by Blake, his old […]