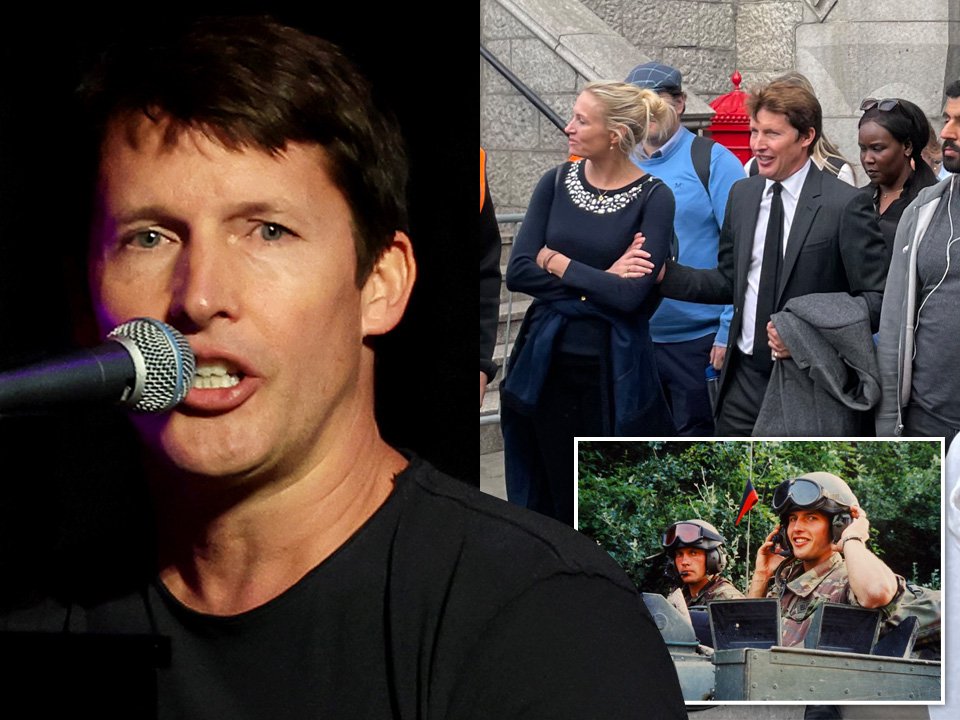 James Blunt has spoken of how the Queen’s funeral on Monday has reminded him of guarding the Queen Mother while she was lying in state.

As well as having a hit pop career, Blunt, 48, is a former reconnaissance officer in the Life Guards regiment of the British Army.

Blunt was part of the funeral procession for the Queen Mother, who died during the spring of 2002 at the age of 101, as part of the Household Cavalry Regiment.

The You’re Beautiful hitmaker queued with his wife Sophia, who is the granddaughter of the 8th Duke of Wellington, to see the Queen last week.

The late monarch’s funeral then took place on September 19, and Blunt said it took him on a trip down memory lane.

‘I stood guard at the Queen Mother’s funeral, so the Queen’s funeral brought it all back, certainly,’ he told The Daily Mail.

He continued: ‘It was so emotional and very moving to see it all unfold.’

The Queen died earlier this month at Balmoral castle before her body was transported back to London where she then lay in state.

The Queen Mother lay in state at the Palace of Westminster, where she was observed by an estimated 200,000 people while Blunt guarded her.

The singer, who has had four top 10 singles and a UK number one in his career, said he waited in line for several hours to see the Queen.

In a tweet, he joked that he ‘offered to sing’ to the massive crowd and was apparently swiftly ushered to the front of the queue to spare any innocent bystanders.

Queen Elizabeth II’s funeral: All the key events as they happened
Date predicted for coronation of King Charles with ‘announcement expected soon’
Queen Elizabeth and technology throughout the years
The history of the Queen’s Coronation chicken and how to make it
All the tributes the Royal Family have paid to the Queen following her death

The Queen’s funeral is said to have been watched by 29 million people in the UK, after being broadcast on the BBC, ITV, and other news broadcasters.

Research by Which? reveals more bad cost of living news this autumn (Picture: SWNS) The cost of flying abroad during the upcoming October half-term break has soared. Analysis by consumer group Which? reveals it will be 42% more expensive to go on holiday than it was before the pandemic during next month’s busy period. The […]

‘I was spending £200 a day on heroin’: My addiction cost me my kids and job

Every morning, I’d get up, put on my ironed shirt and my tie, get in the car and go to work, selling mobile phones at a call centre. I got on with my colleagues, hit my targets, and made my bonuses. I was looking forward to getting promoted and I was saving to buy a […]

Bayern Munich have failed to pick up a victory in their last four Bundesliga games (Picture: Getty) Bayern Munich CEO Oliver Kahn has slammed the club’s players and backed boss Julian Nagelsmann after four league games without a win. The current Bundesliga champions – who have won the last 10 German top-flight titles in a […]